MISSOULA, Mont. (AP) — President Donald Trump praised a Republican congressman for body-slamming a reporter last year, calling him a “tough cookie” and saying he thinks it might have helped him win election in Montana.

At a campaign rally in Missoula Thursday, Trump lauded Rep. Greg Gianforte, who pleaded guilty to misdemeanor assault for an attack on Guardian reporter Ben Jacobs. The attack came a day before Gianforte won a 2017 special election to serve the remaining 18 months in the House term vacated by now-Interior Secretary Ryan Zinke.

“Any guy that can do a body slam — he’s my kind of guy,” Trump said to cheers and laughter from the crowd. “He’s a great guy, tough cookie.”

His remarks praising Gianforte come amid an international furor over the apparent assassination of a Washington Post columnist, who, according to an account in Turkey’s Yeni Safak newspaper, allegedly had his fingers cut off and was decapitated inside a Saudi consulate in Istanbul two weeks ago.

In the case of Gianforte, witnesses including members of a Fox News crew say Gianforte became enraged over what he perceived as biased coverage before body-slamming Jacobs, throwing him to the ground and punching him.

Gianforte initially misled investigators about what had happened, falsely claiming that Jacobs had grabbed him by the wrist and pulled both of them to the floor, according to documents released under a court order following requests from news agencies.

The president said he was in Rome with other world leaders when he heard about what had happened.

“And I said, oh, this is terrible. He’s going to lose the election,” Trump recalled. “And then I said, well, wait a minute. I know Montana pretty well. I think it might help him. And it did.”

Gianforte pleaded guilty to a misdemeanor assault charge in June 2017 and said in an apology letter that he alone was responsible for the attack. He paid a $385 fine and completed 40 hours of community service and 20 hours of anger management counseling. He also donated $50,000 to the Committee to Protect Journalists.

Trump referenced Gianforte again later in the rally when discussing former Vice President Joe Biden, who once said he would “beat the hell out of” Trump if they were in high school.

On Biden challenging him to a fight, Trump said, “He’d be down, faster than Greg would take him down.”

Gianforte, who attended the rally with the president, is up for re-election in November and faces former state legislator Kathleen Williams. The president’s next stop on his three-day trip out West is Arizona. 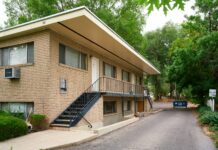