BYU Women’s Basketball is back, and both the team and fans are excited for a great season. Coach Jeff Judkins is expecting some intense teamwork on the hardwood this season, since his team is stacked with freshman.

Jasmine Moody, team captain and forward, said that she’s mostly excited about their game against Ganzaga. “I think it’s going to be a really good match,” Moody said. “I think we have a good chance of winning there. Even though our team is really young, from watching our team play in the summer in Europe, our team has shown that they are not going to be back down from a fight.”

Moody is one of two seniors on the team and is excited to work with the newbies.

Abby Mangum, freshman and forward, said, “I’m looking forward to hopefully winning more games this year and being able to win a conference championship with my team.” While Mangum is just starting out, she’s excited to win.

Coach Judkins is anticipating wins and wants his team to work together and play hard. “Of course we want to win a conference championship,” Coach Judkins said, “we want to go to the instate tournament, we want to be able to have a great season, you know, with having opportunities to play against really good teams.”

The girls really showed what they could do at last night’s Blue and White scrimmage. The blue team dominated the first game at 39-14, shooting a 44.4 percent as a team, including a solid 60 percent in the second quarter.

Paisley Johnson led all scorers with 12 points in the first game.

Brenna Chase contributed four assists for the blue team in the first game and led players with 15 points in the second game.

Blue shot an impressive 51 percent from the field in the second game as well as five 3-pointers.

Catch their first game on November 6 against Dixie state. 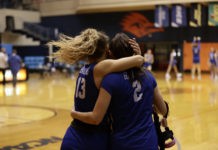 BYU women’s basketball loses to Arizona, 52-46, in second round of NCAA Tournament 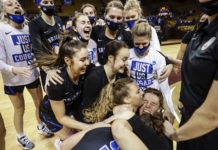 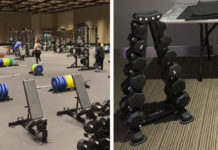