20-year-old, Brandom Lee Carly, was arrested Monday morning, and then booked into the Utah County Jail after he allegedly stole a dump truck and crashed into two police cars with it.

At about 10 pm Sunday night, the suspect hopped the fence of the Helaman Fields Sports Complex, found keys in a dump truck owned by the BYU grounds department, and stole it. “Our officers were called to respond on a suspicious incident down at the track down by Helaman Halls,” said Lieutenant Steven Messick.

The suspect began ramming the truck into the west gate, and when he failed to break through, he reversed the truck and broke through the southeast gate. He drove the dump truck around BYU, on Bulldog Avenue, and through the Marriott Center parking lot; all while the police followed him in a low speed chase. “The dump trump continued for quite a while,” said Lieutenant Steven Messick, “at the very slow speeds of about 20-30 miles an hour.”

He then drove the truck through construction near Helaman Hall, crashed into a police car, and came around to the baseball field ticket office. He was apprehended by the police. He has no affiliation with Brigham Young University. 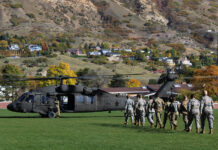