BYU’s Women Volleyball is 16-0 and does not show any signs of losing anytime soon. In their last thirteen games, the Cougars have only dropped two sets while winning 48. The Cougars have been ranked number one in the nation for nearly a month now after defeating Stanford when they were the number one team.

Despite there being a target on the team’s back, players and coaches say that the pressure isn’t getting to them. Head Coach, Heather Olmstead, said, “We are only concerned on how good we can be. The ranking, if it comes, so be it.”

The Cougars are led by a brick wall defense of Roni Jones-Perry and McKenna Miller blocking shots and hitting kills left and right, but the most impactful player sticks out from the rest of the team despite being the shortest player on the roster.

Mary Lake plays libero which is very unique position in volleyball. Lake said, “We [liberos] can’t swing, or jump and attack the ball, or even set the ball in front of the ten foot line. We are kind of a ghost player.”

Most of Lake’s highlights include making diving digs, or dives that result in keeping the ball off of the ground. This season, Lake has 232 digs, which gives a lot of confidence to her teammates. Outside hitter, Lacy Haddock, said, “It definitely makes it a lot easier to have Mary back there. She gets balls up that nobody thinks she can.”

Last month, Lake had a hit against Utah that made ESPN’s Sportscenter Top Ten. She said that she reacted naturally, but didn’t think that she would make it to ball. She did end up making the play, and social media took it from there until it reached “The worldwide leader in Sports.”

Lake is also the team captain of the team. She leads the team in team huddles and motivates and gives credit to teammates when they make a good play. As coach Olmstead said, she is “The Energizer Bunny” for the team.

The Cougars hope to win the National Championship, and if they can continue to win, they will likely receive the number one overall seed guaranteeing home games and by-games on their way to a Championship. 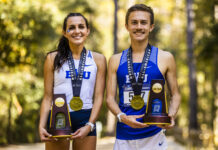 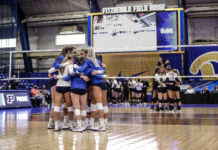