Coming out with intensity, the Cougars scored their first goal in the sixth minute. With the assist from midfielder Bella Folino, forward Elise Flake recorded the Cougars’ first tally from inside the left corner of the box. Flake dribbled around the defender and shot at the bottom left post of the goal, through the hands of the keeper.

“Stay up top and go hard from the start,” Flake said. “That’s why we got so many shots off the first little bit and it paid off. Always better to start off with some momentum.”

The Cougars came out with energy and kept it up through the entirety of the first half. BYU took 18 shots on goal as opposed to the eight that came from Gonzaga.

Midfielder Lizzy Braby took advantage of a ball shot of the post. The ball rebounded to her, and she scored the Cougars’ second goal of the night in the 20th minute.

At the half, the Cougars found themselves up 2-0. Gonzaga came out aggressive in the second half with more energy and physical play. The Bulldogs took six more shots on goal.

In the 55th minute, Gonzaga took a penalty kick and goalkeeper Sabrina Davis deflected the shot. BYU’s defense wasn’t there for the follow-up, and forward Sophia Braun took the opening and made Gonzaga’s only goal of the night off the deflection.

Gonzaga was back within one goal of the Cougars.

“Even though we played really well, especially in the first half, you know when you give up a goal and it’s 2-1, the nerves get going,” Coach Jennifer Rockwood said.

Makaylie Moore was subbed in for Madie Siddoway Gates towards the beginning of the second half. The Cougars wanted to get fresh legs onto the field to bring energy to the team, according to Rockwood.

“We went to our bench fairly early in the second half to try and get some fresh legs out there, and I thought those girls did a great job,” Rockwood said. “We really need people to come off the bench and really contribute.”

After a long winded fight, Moore took a shot on goal from downfield and scored the Cougars their third goal of the match in the 72nd minute.

“Kayla (Colohan) beat the girl just dribbling straight at her. I was just trying to give her a good option,” Moore said. “She played me a perfect ball, first time shot and it hit just below the bar.”

Gonzaga continually got more aggressive. Colohan was walked off the field after getting her hand stepped on in the 87th minute. Bulldog midfielder India Jencks had a yellow card pulled on her for this action. 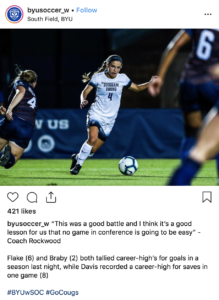 “This was a battle,” Rockwood said. “It’s a good lesson for us that no game in conference is going to be easy. It makes you play your very best for 90 minutes because anything can happen.”

The Cougars ended the match with a final score of 3-1. BYU will be hosting their second WCC game against Portland on Sept. 29 at South Field.