There is absolutely no way an ordinary citizen has the time to listen to every single debate, 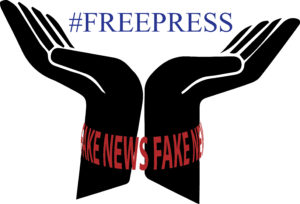 read every official document, or participate in every trial case. Journalists have a full-time job, as in they are paid for the time spent on research, to translate all of this information so that it can be consumed by everyone, with no discrimination on gender, age, race, or political view.

The people still hold the power, and might I add responsibility, to make decisions. Everything should be questioned, including the things one agrees with. Both the government and the press should serve as a support system to every citizen. Journalists are still humans, with thoughts, opinions, and concerns of their own. It is the responsibility of each news outlet to make sure news pieces are written as unbiased as possible, but the mainstream media is not giving the people any answers, it is providing knowledge, and therefore power.

“A free press stands as one of the great interpreters between the government and the people. To allow it to be fettered is to fetter ourselves,” as George Sutherland put it.

Collins Dictionary made “fake news” its word of the year in 2017, but misinformation has been around for much longer than that. The truth is, that kind of reporting will always exist as long as social media is available, as long as people have a political agenda, and as long as democracy is in place. This is no excuse for fake or biased reporting.

There is much room for improvement, and we invite all news consumers to let us know when you believe we, as journalists, did a good job, but especially when you think we could have done better. It is time for the people of this great nation to stand up and exercise not only their bodies but their minds. The human mind needs to exercise thinking in order to grow, just like our bodies need resistance to become athletic. A government or a press that thinks and acts for the people is like a dream where you’re running, illusive and ineffective.

Journalists are here to inform and to fight beside you, not against you. Liberals and conservatives, blacks and whites, Americans and immigrants, we all want the same, to be happy, to see our families safe, and equal opportunities. We do have different opinions on what is the best route which will take us there, but we all have what it takes to work it out. By exercising an open mind, common ground can generally be found.