The proposed bill would require firearm owners to securely lock up guns when the weapons are not in use.

“This will save lives in Utah,” Weight said.

The bill is still in the draft process but the proposal said it would require firearm owners to be personally responsible for their weapon by requiring guns to be stored in a secure container if the owner is not directly overseeing the weapon.

Weight invited Braden Hayney, a student at Woods Cross High School in Bountiful, to share his perspective as a student and how he interprets the current atmosphere surrounding school shootings.

Hayney said he believed the bill would help with suicide prevention and school safety, two of the most pressing issues surrounding gun control.

Deborah Gatrell also spoke in favor of the bill. As a teacher with 19 years of experience in the military, Gatrell believes the issue deserves attention. “The anxiety level has gone up at school.”

Gatrell said when she thinks of this bill she thinks of a fellow teacher who now has regular panic attacks in fear of a shooting happening at their own school. Teachers and counselors are now talking about early retirement after the increase of school shootings, according to Gatrell.

Gatrell said leaving firearms unsecured is “irresponsible to say the least.” She also said the issue is complicated. Although safely storing firearms will not solve the problem, it’s a good step towards lessening school shootings.

In addition to school safety, suicide prevention was thoroughly discussed.

State Sen. Daniel Thatcher, R-West Valley City, shared the story of a young man who had attempted to take his life. The young man had gone to his parent’s room in search of his father’s pistol to end his life. His father had placed a trigger lock on his gun just a few days prior and the young man was unsuccessful in opening the lock. After struggling for several minutes he decided to give up and instead seek help.

“That young man is alive — and currently serving a mission — because his dad put a trigger lock on his weapon,” Thatcher said.

Thatcher said school shootings and suicides are a mental health issue and the lack of mental health resources and help is a major issue. He said the stigma surrounding mental health is a serious crisis that needs to be owned and acknowledged so others do not feel alone in their struggles.

He also discussed other potential issues surrounding the proposed bill. “Do we want to criminally charge a grieving parent?” he asked.

If a parent failed to secure a firearm and a child used that weapon to hurt themselves or others the parent could face potential legal consequences.

Brian Judy, a senior state lobbyist for the NRA, said the bill is something the NRA would conceptually oppose. He said Utah firearm owners are already extremely responsible and the real problem with child gun deaths is a lack of parental supervision.

“It comes back to the mental health issue…dealing with the underlying issue is the key,” Judy said.

The committee discussed the possibility that even if guns were safely stored suicidal individuals would simply seek other means to end their lives.

State Rep. Ed Redd said although people would seek out other means, firearms are the most lethal way to end a life. As a practicing physician, he explained gunshot wounds are the most fatal and deadly of all suicide attempts.

“if you use a weapon the chances of any physician or any health care provider being able to help you out of that position is very small,” Redd said. “If they take a pistol and stick it in their mouth and pull the trigger there’s nothing we can do for the most part.” 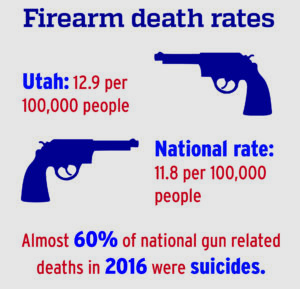 According to the Violence Policy Center suicide is the majority of firearm fatalities. The center reported that in 2016, 22,938 of the 38,658 total gun deaths were suicides and that in 21 states—including Utah—gun deaths outpaced car accident deaths.

The Center for Disease Control and Prevention reported in 2016 Utah’s firearm death rate was 12.9 per 100,000 people, while the nation’s rate was 11.8. The Safe Storage of Firearms Amendments will be voted on in the next Utah legislative session.