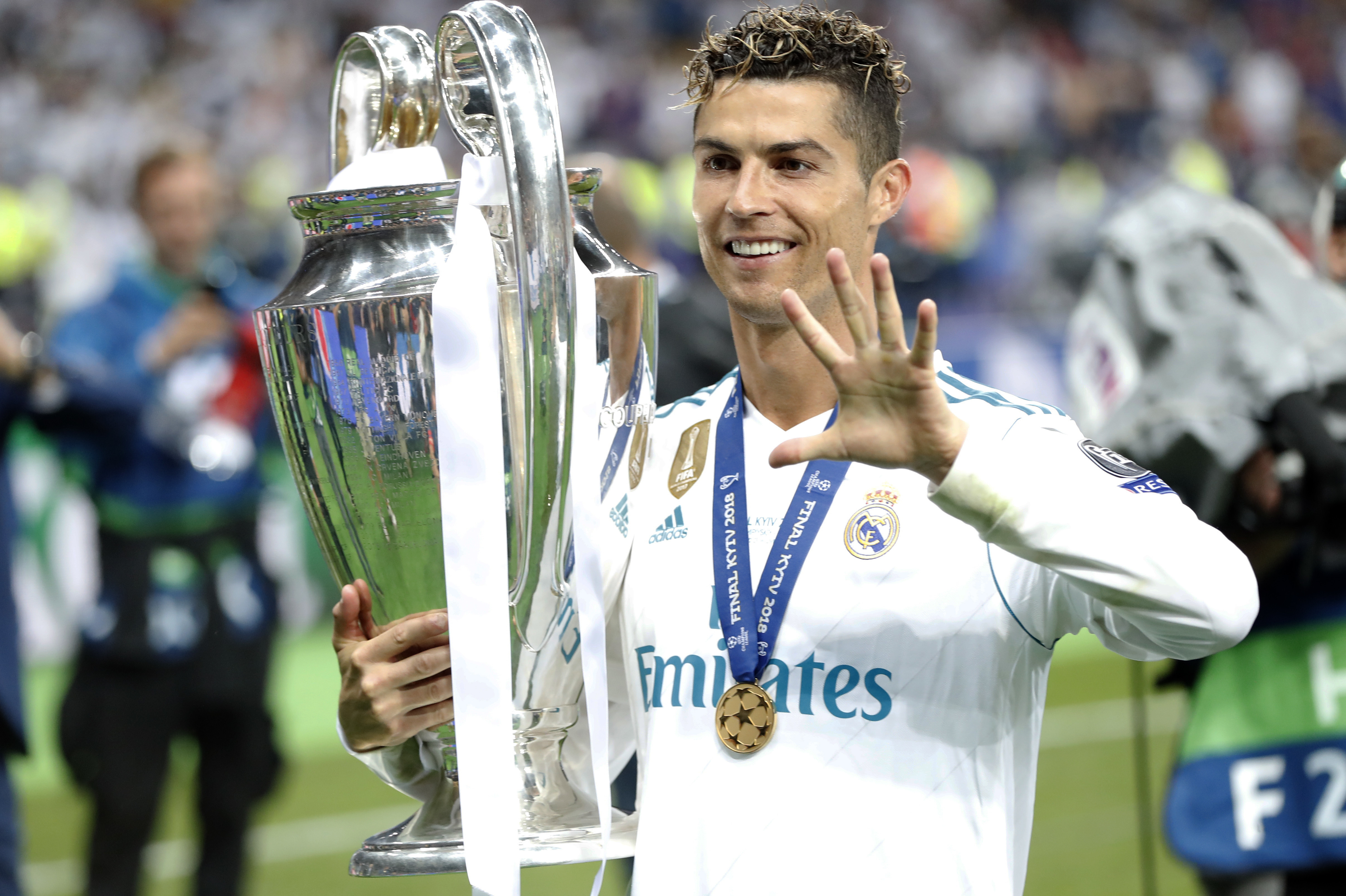 Read or listen to a Portuguese translation

It was the day after Real Madrid won its third-straight Champions League, and thousands of fans lined the sidewalks of the team’s home city, awaiting the players’ victory parade.

There were two common accessories among the fans, a Real Madrid flag and a jersey with the name “Ronaldo” on the back.

Screams and cheers erupted as the team bus appeared in the distance, making its way towards the Plaza de Cibeles, in downtown Madrid.

As the bus got closer, the cheers narrowed to one name, “Cristiano!” At the front of the bus, closest to the trophy, was Cristiano Ronaldo, who, less than 24 hours earlier, became the first player in history to win five Champions League titles.

Ronaldo is the most popular athlete in the world, and for many years was the highest paid as well. Following his impressive performance in the Champions League tournament, carrying his team to yet another final, he would appear to the casual fan or observer as the best in the world.

Yet, a debate still remains over where exactly Ronaldo stands among the greatest in history, and at the moment.

One debate, in particular, stands out from the rest, and that is between Ronaldo and Lionel Messi, who plays for rival club Barcelona. It is a debate heard on trains in Spain and in a Sunday School class in Provo, and seems to always create impassioned responses.

Fans and experts weighed in on the subject to understand why exactly this debate exists, and how to accurately describe the lasting legacy of Cristiano Ronaldo.

Diego Torres, who was born in Argentina but lives in Spain, is a sports writer who has been covering Real Madrid, Ronaldo’s current club, for over 20 years. In his mind, there is no debate.

“When you gather a group of soccer players, not just between Madrid and Barcelona, but from Manchester United or Liverpool, and you sit them down at a table and ask who the best player is, there is no debate,” Torres said. “Messi is the best.”

Though Messi has just four Champions League titles to Ronaldo’s five, Torres explained that Messi is the more complete player, being able to influence the game by passing and scoring from multiple positions.

Calvin Westfall, a junior at BYU who served his mission in Barcelona and did a study abroad in Madrid, agreed that while Messi is a more complete player, the debate is not so clear-cut.

Both players have spent time at both striker and midfielder, but Messi tends to be a more ball-dominant, attacking midfielder, while Ronaldo plays more off the ball as a pure striker.

This difference is somewhat recent, however, according to Torres, who explained Ronaldo was forced to change the way he played as he got older and his body slowed down.

“Before, Cristiano would get the ball and run straight at the goal,” Torres said. “When he realized he didn’t have the strength to do that anymore, he would pass the ball to a teammate and he would run behind the defense and get the cross.”

Below is a video demonstrating the way Ronaldo used his speed and athleticism early in his career to get past defenders and score or set up teammates.

The next video shows how Ronaldo has adapted his game to play off the ball and cut into the box for headers and close-range goals.

Torres says that altering his style of play has allowed Ronaldo to “raise his level of efficiency and elongate his career.”

Westfall and Spanish journalism student Alex Mosteiro agreed with the description of Ronaldo’s transformation, adding that his exceptional athletic ability allows him to rise above defenders and finish off crosses.

“With Ronaldo there were a couple of times when he went up for a challenge in the air and I was like ‘how did he jump that high?’” Westfall said of his experience seeing Ronaldo live. “It was ridiculous how high he got. The control with the chest, and then when he brought it down, I was like ‘I’ve never seen that before.'”

Although the goals that Ronaldo scores are important and impressive, Torres argued that Messi is able to influence the game in a lot more ways than just scoring, by passing and dribbling.

“There is another way to decide games other than just goals, and that is the last pass, the assist,” Torres explained. “Messi is the best assister in the world, Cristiano no. Messi has decided many games with his assists and his dribbling.”

The ability to decide games is what Mosteiro said sets Ronaldo apart from Messi, but the stats say otherwise, according to Torres.

“Look at the games that Messi has played against Cristiano,” Torres said. “Look at how many Messi has decided and how many Ronaldo has decided, the debate is over!”

The one accomplishment that has alluded both Ronaldo and Messi, however, is a World Cup championship. This is the only major trophy that Ronaldo has not won, and if he is able to do so, could vault him past Messi in both current and historical rankings.

“Messi has more pressure, because Ronaldo doesn’t expect to win the World Cup,” Mosteiro explained. “(Portugal) winning the EuroCup in 2016 is an exception.”

Mosteiro added that until Messi wins a World Cup he will never be as great as the Argentine legend Diego Maradona, compromising his place among the best of all time.

Torres believes that Ronaldo, on the other hand, has a better team around him in Portugal, and has a real desire and chance to win the World Cup this year.

If his hat trick in Portugal’s World Cup opener against Spain is any indication, Ronaldo is more than ready for the challenge that awaits him on the world stage.

The desire to win another trophy stems from Ronaldo’s need to prove himself and receive public praise, according to Torres, who has observed the behavior of Madrid’s star player for nearly 10 years.

“He’s a social soccer player,” Torres said. “There is a big difference between Ronaldo and the other Madrid myths, Cristiano is more childish. He much more vane and frivolous.”

This need for fame and fortune may lead Ronaldo to leave Madrid this summer, and seek a contract and transfer fee worth more than his primary competitors, Messi and Neymar.

Ronaldo hinted at a departure from Madrid following the Champions League final, saying, “It was very nice to be at Real Madrid…in the coming days I will give a response to the fans, who have always been at my side.”

No matter where he goes, Ronaldo’s legend and fame will follow him and continue to grow as he reaches more fans, both in the stadium and on social media.

Torres explained, however, that local fans having become increasingly critical of Ronaldo, despite his growing worldwide popularity.

“Madrid has played very bad at home this season, in both La Liga and the Champions League, and the (local fans) have criticized Ronaldo a lot,” Torres said. “But now they are irrelevant, because the public has become a global, virtual audience. These virtual audiences worship Ronaldo, but the people who see him in real life don’t see him as an idol. The further you are from reality, the more you worship him.”

Those who only see his best plays and stylish photos on Instagram put him on a pedestal as an icon, viewing his larger-than-life personality as a sign of greatness.

“This didn’t happen before; your admiration matched how close you were to the idol,” Torres said. “But now the further you are the more you like him, and the closer the worse.”

Ronaldo leads all athletes in the world with 203 millions followers across Twitter and Instagram, and even if he isn’t the most talented soccer player, and doesn’t win the World Cup, his status as a soccer legend can only grow from here.