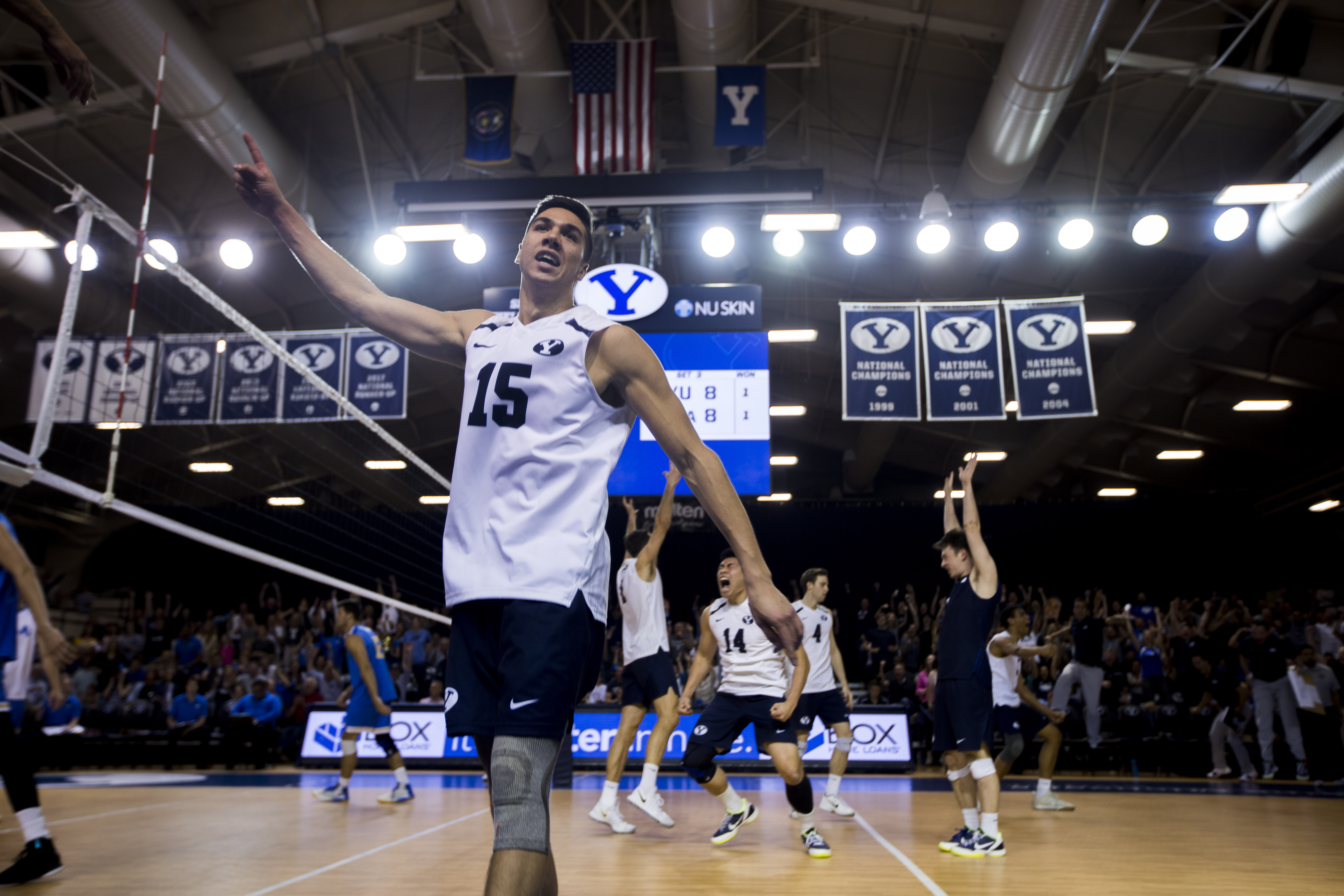 No. 4 BYU men’s volleyball took sets two through four after dropping the first to beat No. 2 UCLA in the Mountain Pacific Sports Federation Championship.

“It was a hard-fought volleyball match,” said coach Shawn Olmstead. “More than anything I’m just excited for this team.”

BYU jumped out to a quick 4-1 lead with three consecutive blocks, but service errors from both teams allowed UCLA to come back and tie the first set at 10.

The Bruins were able to take the lead midway through the first set, 15-13, hitting at a .357 clip with eight kills early.

UCLA’s hot hitting continued, extending its lead to 19-13, including two consecutive aces at one point.

The Bruins took the first set, 25-17, with Daenan Gyimah leading the way with four kills. Brenden Sander had a team-high three assists for the Cougars in the first set.

The Cougars once again jumped out to a quick 3-0 lead in the second set, but weren’t able to maintain it for long.

The Bruins came to back to take a 4-3 lead, but the set remained close, with BYU tying it 8-8.

BYU got a game-tying block to knot things up at 13, and then took a 15-13 lead with another block and an ace to get the Smith Fieldhouse rocking.

UCLA kept it close, however, tying the game once again at 17. A 3-1 run from the Cougars then caused a timeout, with BYU leading 20-18.

BYU was able to hold onto the lead, and Gabi Garcia Fernandez ended the set with a kill to win it 25-21 for BYU.

UCLA jumped out to a 4-0 lead to start the third set, capped off by an incredible diving save into the crowd.

BYU came back to take the lead, 7-6, partly due to service errors by the Bruins and some eye-popping blocks, getting the crowd back into the match.

Senior Leo Durkin on how the team came back from a first set loss to win the conference title. pic.twitter.com/8V1SnyI35E

An incredible volley capped off by a picture-perfect kill from Sander gave BYU the 12-9 lead. That was Sander’s ninth kill, leading all players at the time.

The Cougars dominated the latter half to the third set to win it 25-18. Sander was up to 11 kills, with Garcia Fernandez right behind him with eight after three sets.

Sander said he was able to perform so well by, “trusting each and every one of (his) teammates, and all the guys around (him) supporting (him).”

“One of the things I love about this team is before each game we say we’ve got each other’s backs,” Sander added. “And we end it by saying we’re a family.”

Despite a close start to the fourth set, BYU was able to jump out to a 12-7 lead, thanks to Sander’s continued strong hitting, and impressive blocks from the team, who totaled 11.5 on the night.

The game tightened, with UCLA bringing themselves within two, 17-15, but BYU was able to maintain control.

BYU looked to close it out after taking a 22-17 lead, but allowed UCLA to get back into the game and close the gap to 22-20.

A missed hit from UCLA gave BYU the championship victory, however, taking the fourth set 25-21.

Sander finished with 18 kills, with Garcia Fernandez close behind him with 12. Felipe de Brito Ferreira led the team with six blocks.

“I’m not surprised, are you surprised?” Olmstead said of Sander’s performance. “You can see it in his eyes. He’s a leader, he’s not the most vocal, but you want a leader who is going to do, and lead by example.”

The Cougars head to California next to participate in the NCAA Tournament, May 3-5.

“We’re all in for the next couple weeks until we’re there,” senior Leo Durkin said on the tournament.