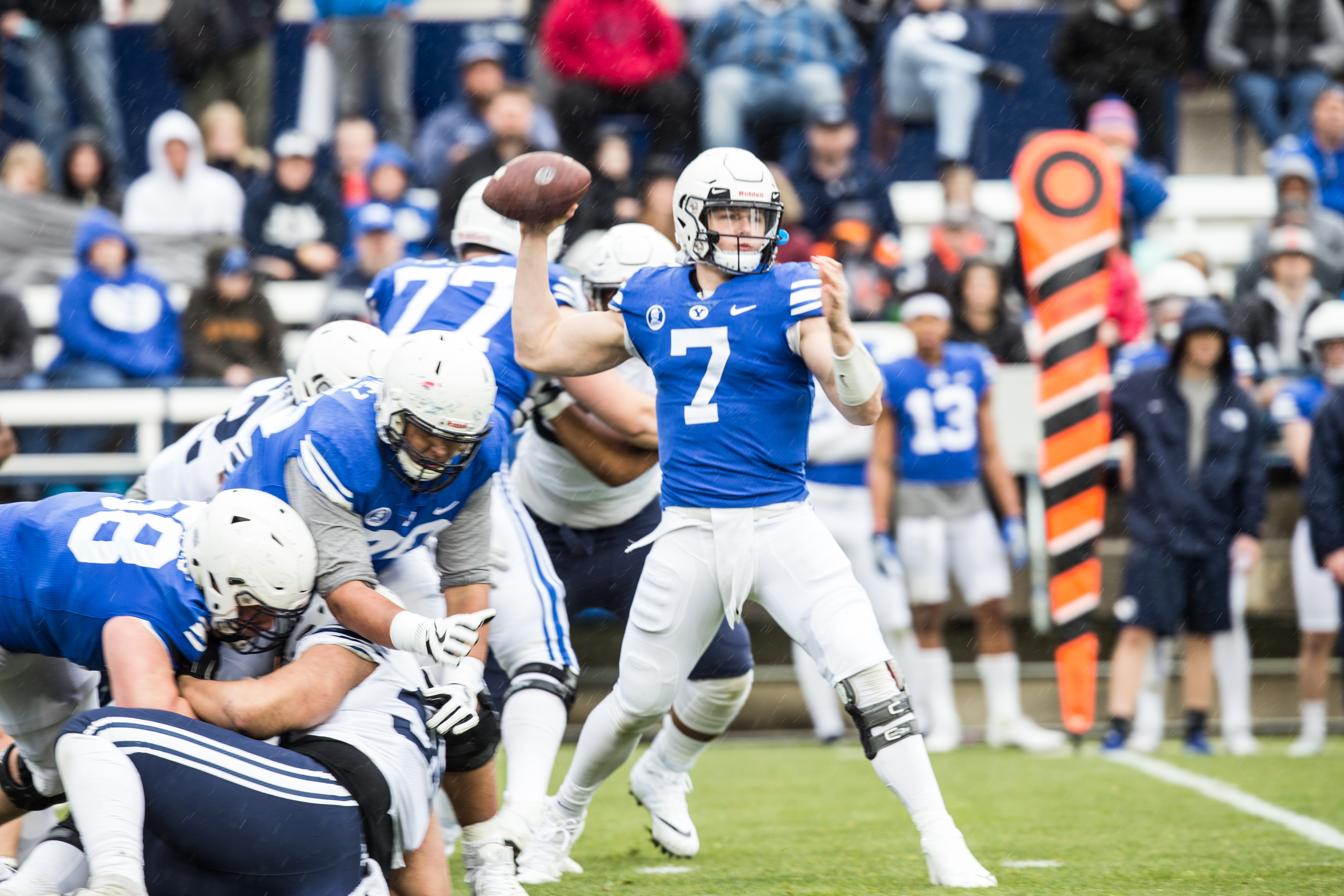 Greg Wrubell has provided radio and television commentary and analysis on BYU sports for over 20 years. He joined us to discuss the biggest stories coming out of spring ball. We asked him some questions what he observed and some takeaways going forward.

Daily Universe: What were some of the biggest takeaways from spring ball for you?

Wrubell: For being a cold, rainy day, with a new offense and a new scheme and a lot of new pieces in place, to get through (spring scrimmage) without any turnovers, offensively, I think was a real positive. As Coach (Jeff) Grimes noted afterward, there weren’t any pre-snap penalties, and so from a cleanness standpoint — and a crispness standpoint — I think he should be really happy with how the day went.

We didn’t see everybody that we’re going to see in the summer or fall, but we saw enough guys to know that some of these new plans are taking root and taking hold, and overall I was really encouraged.

DU: Who was the biggest standout on offense?

Wrubell: Zach Wilson got a lot of attention during spring camp, but Joe Critchlow got the most reps, attempted and completed the most passes and had the most scoring drives. So I think from that standpoint, what Joe Critchlow did was pretty impressive. Even though he finished the season last year as the starter, I think a lot of folks were paying more attention to either Tanner Mangum or Beau Hoge or Zach Wilson, and Joe Critchlow showed that he’s still somebody to be reckoned with.

To me what that said is you’re going to have a good competition in August. Tanner will be full-go it looks like, Beau Hoge got a lot of reps last year to show that he belongs in the mix, and then Zach Wilson was really impressive coming in as a true freshman, and Joe Critchlow showed that the reps he got last year meant something.

So, what I think it means is we’re going to see a real competition in August, and may the best man win. As Kalani (Sitake) and Coach Grimes have said, whoever the best player is, that guy plays — freshman or otherwise — and again, the candidates are kind of spread across all the different classes, from freshman to senior, so there will be a lot of things to consider when they go live in August.

Zach Katoa, Zachary Lopini Katoa, the running back, looked as good as people said he would be. I got to see him enough during practice to know he’d be an exciting player on game day in the spring, and that he was. There weren’t a ton of backs available, so Squally (Canada) and Zach Katoa got a lot of reps and looked good.

Those were a couple of guys, but beyond that, if you look at the offensive line, Tristen Hoge, James Empey, Austin Hoyt at right tackle, the fact that Shoaf could be moved inside and that Brady Christensen took a spot a left tackle. I thought the O-line looked really good, and you can tell they’re getting a lot of precise coaching from Coach Grimes and Coach (Ryan) Pugh.

So really the entire offensive line, along with Zach Katoa and Joe Critchlow, were some standouts, but Zach Wilson looked really good, as you expected he would after his strong spring camp. And the real pleasant surprise — even though he didn’t play live 11-on-11 — was how good Tanner Mangum looked in the spring doing what he was doing, and he was doing more than I thought he could do.

DU: Who was the biggest standout on defense?

Wrubell: Devin Kaufusi is someone that the older brothers, Corbin and Bronson, say might be the best of the bunch. We called his name and number a lot on spring scrimmage day, so Devin Kaufusi would be considered a standout. The fact that Zane Anderson is able to move from a safety to a linebacker spot, he and Isaiah Kaufusi both, I think will be players we hear from in the fall.

It’s tough to tell too much about the safety crew because we haven’t seen Troy Warner at full speed. Dayan (Lake) didn’t get a lot of reps on game day, but we know who Dayan is obviously. The position changes will be interesting, and it clearly signals they feel good enough about their corners to be able to move two good corners inside to safety.

DU: Who has separated themselves in the QB race?

Wrubell: The four guys we mentioned are the four guys who will be in the true competition, and it’s interesting that they are again, all spread around, freshman to sophomore to junior to senior – they’re all at different stages of their development. And you know Tanner of course has the most yards and reps behind him, but it’s kind of do or die for him now, because this will be his senior year, right? So he has to go out and really win the job, and if he does win the job, I think BYU’s in great shape, because that would mean he’s maybe back to his freshman form, if you will, which would be really positive.

Beau Hoge’s only questions tend to revolve around his health. Zach Wilson’s questions only tend to revolve around his inexperience and how young he is, but he looks to have all the tools, and Joe Critchlow is the guy that finished the year as the starter and showed that he’s to be reckoned with. So more than anybody separating themselves, I think all of them showed just how good the competition could and will be in August.

DU: What are your first impressions of the new coaching staff?

Wrubell: I was able to interact with and interview them extensively before spring ball got under way, and all of them bring a unique perspective and/or skillset to the table. But what unifies the offensive coaches in particular, not to disregard either the position switch for Coach (Ed) Lamb or bringing Preston Hadley in on defense, but things are a little more established defensively right now – there was much more turnover on offense.

The unique component of all the offensive hires is just how many of those guys have coordinated offenses before: from Steve Clark to Fesi Sitake to Aaron Roderick to now Coach Grimes. Guys who have been in that position before, at the highest level coordinating an offense, are now all coming together to contribute to what Coach Grimes is putting together. And from what I understand, while Coach Grimes is definitely the boss, it’s his offense. He wants to rely on those other experiences to help him make his playbook.

And from what I can tell, and once again no games have been played yet, but the offensive staff chemistry sounds to be top notch, and just the experience level they all bring I think elevates the current staff from where it might have been previously.

DU: What has changed since last season, and what direction do you think the team is headed in?

Wrubell: It almost took going off course to bring about such a radical course correction, and that’s what we’ve now seen. For whatever reason, Kalani probably saw his intended cultural touch points beginning to be disregarded, and I think he needed to bring everybody back around to where those touch points were relevant again, and that the culture was on the way to being restored again.

Maybe that first season, because they went 9-4 with that new staff, maybe that created a little bit of a false sense of security in that maybe some things that could have been corrected weren’t, because of how successful the team really was. And by the time real corrections were warranted things had kind of become unspooled and gotten off the rails a little bit. So credit Kalani for realizing what had happened, or was happening, and making substantial changes to, again, correct the course and get back online.

DU: Thanks for coming on, We appreciate your input and look forward to getting back at this during fall camp.