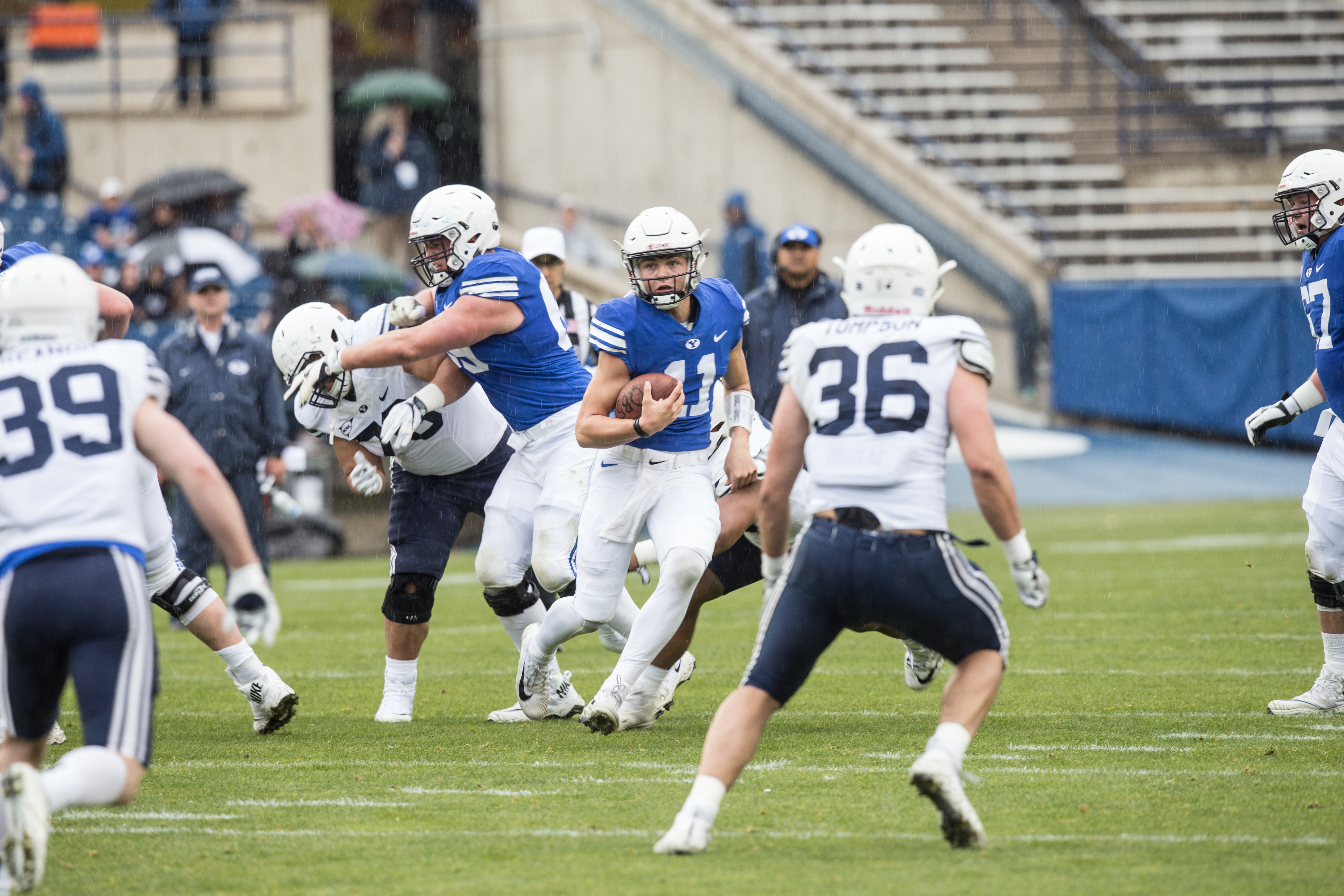 The rain and cooler temperatures did not stop thousands of BYU football fans from attending the team’s annual spring scrimmage Saturday, April 7, and the players made it worth it for the crowd, giving them a first glance at Jeff Grimes’ new offense and the surplus of talent at quarterback.

Corbin Kaufusi on the rainy and wild spring scrimmage. pic.twitter.com/iZh9l6R38R

“We probably should have practiced in the rain a little bit more, but there were some things I was pleased with,” said coach Kalani Sitake. “I thought discipline wise, the offense did a lot of hard counts today. We had more success offensively then we have had in the past.”

The battle for starting signal caller has been the talk of spring practices this year, with seven of them on the roster and each with a unique and tempting skillset.

Only five of them played during the full 11-on-11 scrimmage, with just three playing multiple possessions: Joe Critchlow, Beau Hoge and Zach Wilson.

Tanner Mangum, last year’s starter, participated in pre-scrimmage drills and some 7-on-7, but told BYUtv’s Jarom Jordan he still has a few weeks to go before being fully healthy and game-ready.

Critchlow started the scrimmage for the offense, and almost immediately threw a 40-yard pass for the highlight of the day.

The intended target was junior Micah Simon, who made the acrobatic one-handed catch to complete the play.

Critchlow and Simon connected on several plays during the scrimmage, giving hope to BYU fans who lacked a consistent quarterback-receiver tandem to cheer for last season.

Critchlow finished the scrimmage with 130 yards — over 100 more than any other quarterback — on 9-for-12 passing and also found the end zone once. The performance may come as a surprise to many who saw Hoge, and even possibly Wilson, as the frontrunner for the starting position with Mangum still out.

Hoge was the second quarterback to see action and showed off some of his dual-threat qualities with a scramble and a few solid throws, as well. He also threw a near-interception that someone landed in the hands of Inoke Lotulelei.

Wilson took over on the third possession, rushing for a few plays and for a few double-digit yard passes to Neil Pau’u and Brayden El-Bakri.

Wilson was the breakout star of spring ball, along with fellow freshman Zach Katoa at running back. Both perform composed and consistently at a high level for their lack of college experience.

Katoa led the running backs in total yards in the scrimmage with 86, but was not able to find the end zone.

Baylor Romney and Stacy Conner each played just one possession at quarterback, with no notable plays to make them stand out in the crowded race.

Squally Canada was the star of the spring scrimmage, after sitting out of several practices last month with sickness and injury.

Canada scored three touchdowns during the practice game and was the go-to option in the run game for BYU’s offense.

Offensive coordinator Jeff Grimes elected to guide the scrimmage from the press box, while his assistants communicated with players from the sideline.

“I certainly like the view and the ability to think in a calm, serene atmosphere, but I certainly don’t like not being with the guys,” Grimes said. As for whether he’ll coach from the field or the press box in the future, he said, “The decision will be answered and won’t just be about me, but about the rest of the staff and the team (on whether I coach from the field or press box).”

Looking forward, the team and staff now prepare for fall camp in July, when they hope to establish a clear depth chart and culture for this year’s squad.

“Guys are willing to be coached, willing to work hard, but we aren’t where we need to be yet,” Grimes said. “I think our culture is moving towards what we want and with a good summer and fall camp I believe we will be there.”

Sitake did not specify the current pecking order for quarterback, but did confirm that Mangum will be ready in the coming weeks.

“Tanner Mangum is really close to going live. He will join the competition in the summer at player-run practices,” Sitake said. “We would like to establish a depth chart in the position groups (during fall camp) and see what happens.”