Alan Clegg is not your ordinary BYU wrestler. At 38 years old, he’s nearly 20 years older than his competition.

After wrestling in high school, Alan attended BYU. But the Cougars didn’t have a wrestling program, so he transferred to Palomar College in California to compete.

“I was pretty good (at wrestling) in high school, and then I wrestled two years at a junior college in San Diego and I was not good in junior college.” Alan said.

After wrestling at Palomar, Alan decided he was done with the sport and retired. He began a career as an elevator mechanic, a job that brought him and his family to Utah.

Soon after, he decided to quit his job, return to BYU and pursue his dream of becoming a doctor. When he heard wrestling was now a club sport on campus, he decided to give the sport another try.

The transition was not easy. “I came in at a very soft 255 pounds. My second practice, I said, ‘I can’t do this, these kids are too fast, they’re too strong,'” Alan said. “I am wasting my time; I’m going to make a fool of myself.’” 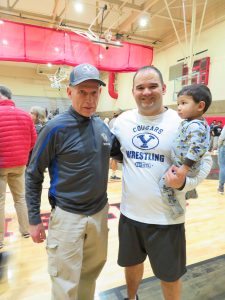 In those first few practices, Alan could barely make it through a seven-minute wrestling match. He was sure he couldn’t do it, until one practice when the coach made them wrestle for 28 straight minutes, and he did it. That’s when realized he could compete.

Alan worked hard to compete with his much younger teammates, losing 20 pounds in two months.

With full-time school and wrestling practices, Alan knew his family, including his wife, Melissa, and six children, had to make some adjustments.

“I try to get all of my studying done Monday through Friday; Saturday is family day,” Alan said.

Alan brings his children to campus when possible to let them hang out.

“After TA sessions we go to all the large classrooms on campus that I know of and let them look for things that the students have left around,” Alan said.

It’s time he looks forward to, despite his busy schedule.

Alan credits wife with keeping things organized. “Every minute I am wrestling she has the kids to herself,” he said. “I feel like I get all the glory and she does all the work, and she never complains.”

Melissa said Alan works 80-hour weeks in the summer to pay for his school expenses.

“He is truly an inspiration to us all,” she said.

BYU wrapped up its season at the National Wrestling Collegiate Association Championships on March 8. The Cougars ended the season ranked fourth in the country with eight individual champions and six All-Americans.

Alan’s season came to an end at nationals when he was pinned in the consolation round of 16. His overall record was 6 and 4 on the season.

Alan is a junior and has one more year of eligibility. Later this year, he’ll take the Medical College Admission Test, hoping to get accepted to medical school.