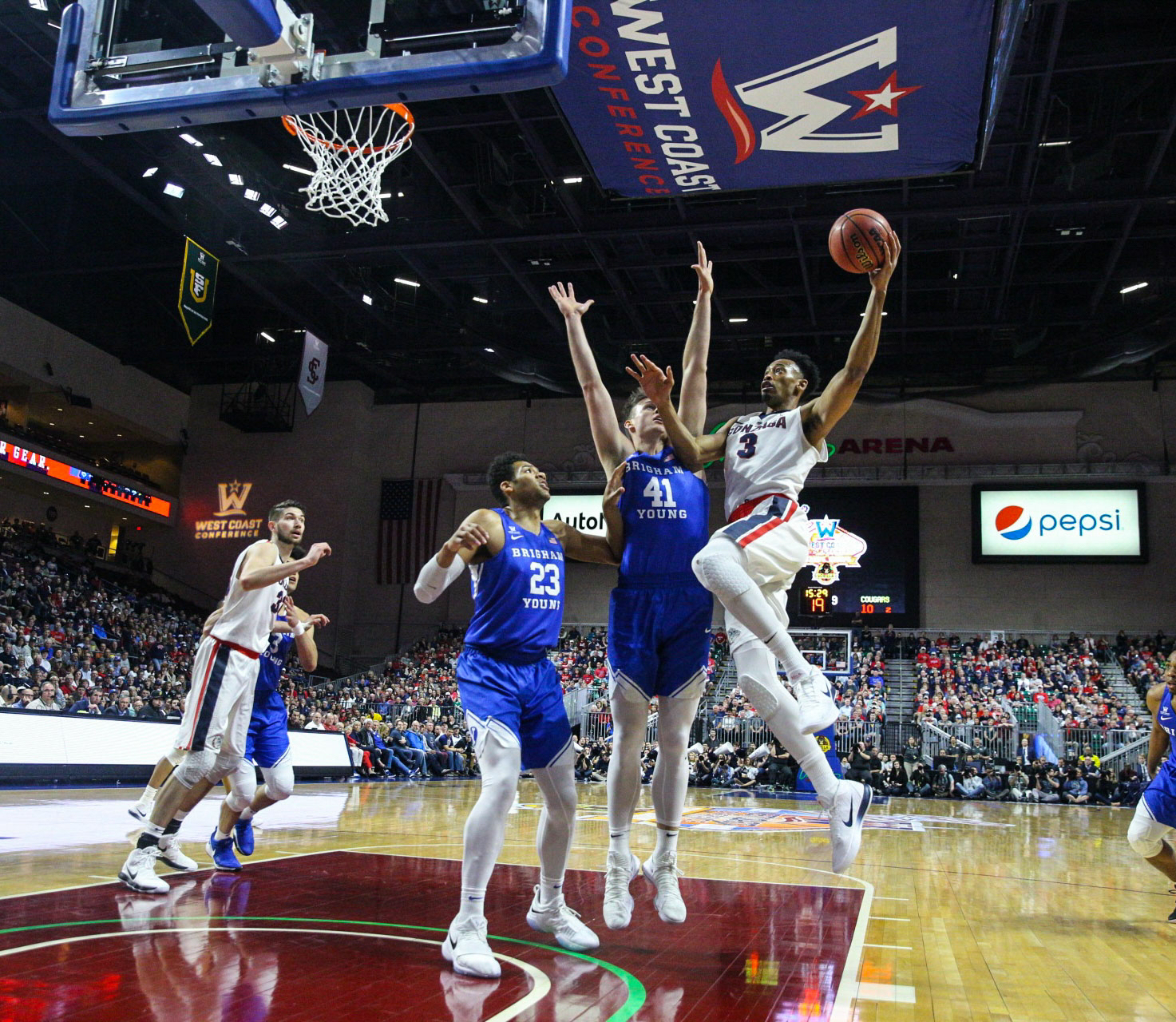 The Gonzaga Bulldogs put on a dominant performance in the West Coast Conference Championship, defeating BYU men’s basketball 74-54 in the Orleans Arena in Las Vegas.

“This team has a lot of character, a lot of heart,” said coach Dave Rose on the Cougars. “I’ll go to battle with these guys any day.”

Both teams opened the game shooting 4-for-9, with the Bulldogs leading 11-10 after the first five minutes.

Zach Norvell Jr. lit it up for Gonzaga in the early going, and finished with 11 points in the first half, including three 3-pointers.

Following the first timeout, Gonzaga went on a 4-0 run to take an 18-14 lead midway through the first half.

“They’re a great team, and they have great players,” said Elijah Bryant. “They’re well coached, and they hit shots – we didn’t.”

Bryant began to take on some of the scoring load late in the first half, finishing with seven points in the period.

Killian Tillie led the charge for Gonzaga, putting up 10 points in the first half.

Both teams struggled to shoot the ball in the first half, going a combined 27-for-66.

Despite Childs’ high-scoring period, the Bulldogs dominated in the paint, leading in rebounds 25-15 after 20 minutes.

Gonzaga started the second half on a 9-0 run, extending the BYU scoring drought, and taking a double-digit lead early in the period.

Gonzaga looked the better team by a large margin in the second half, extending its lead to 32 points midway through the period.

“For the first 17-18 minutes it was a battle,” Payton Dastrup said. “(Gonzaga) seemed to flip a switch, and were able to create some havoc and disturb us.”

The Cougars didn’t give up, putting together a 10-0 run, and bringing the score to 65-43 with seven minutes to go.

BYU wasn’t able to get over the hump, however, and Rose began to pull the starters with three minutes to go.

Four Bulldogs ended the night in double-figure scoring, putting together a complete team effort to take down the Cougars.

Tillie, the tournament’s Most Valuable Player, ended the night with 22 points and six rebounds.

“Congratulations to Mark (Few) and his team, I wish them the best of luck in the NCAA tournament,” Rose said. “I’m proud of what our guys did – they hung in there.”

Childs was named to the All-Tournament team for his stellar play, along with Tillie and Johnathan Williams from Gonzaga.

The Cougars have a 24-10 record, and are currently a “bubble team” for the NIT tournament, meaning they could be knocked out by an automatic bid team.

“We knew that we put ourselves in a situation to win all three and go to the NCAA tournament, so we’re going home a little disappointed,” Rose said. “We have improved and we continue to improve, and we’re on a trajectory to get better and better.”