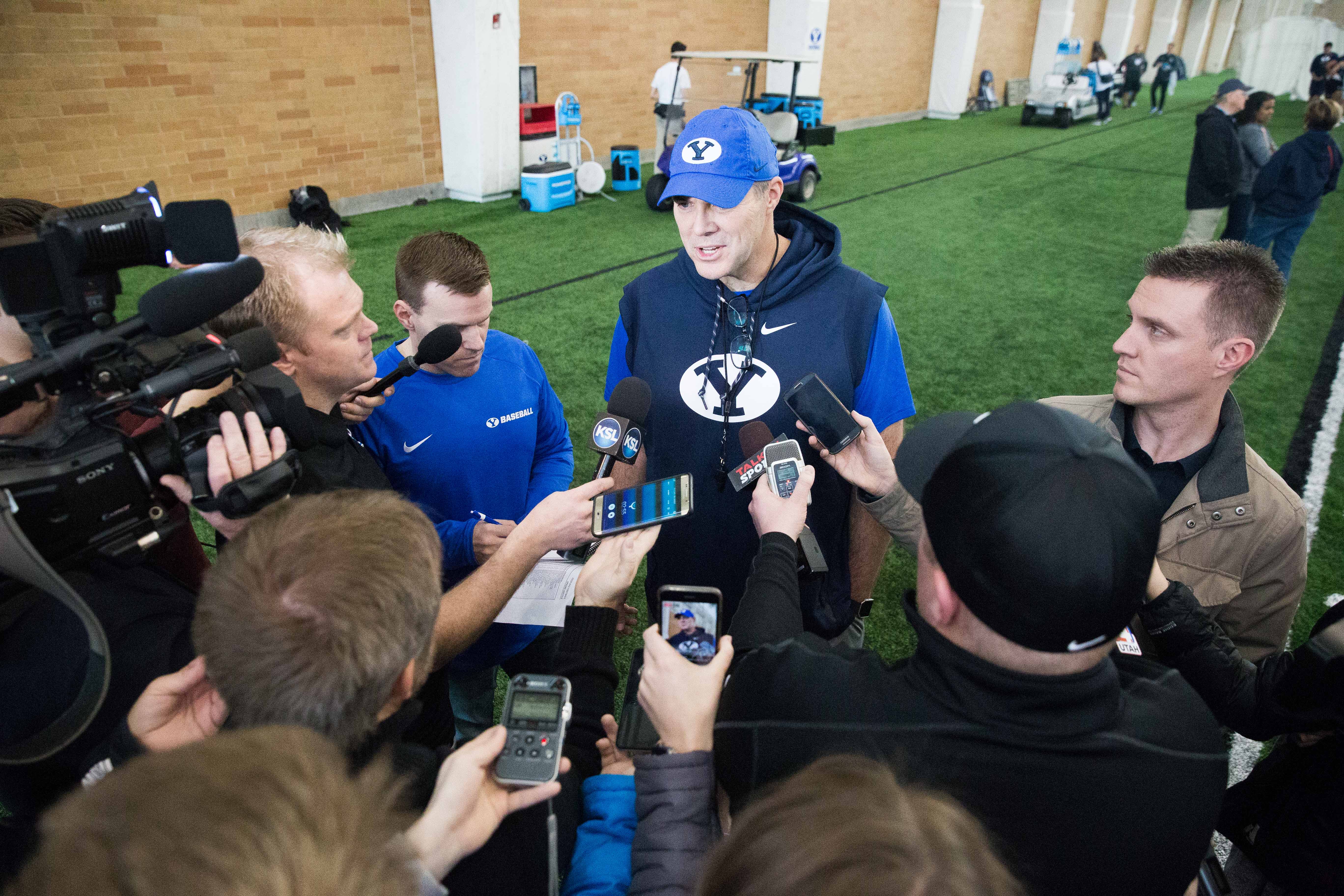 BYU spring football camp began Monday, Mar 5, as the team hopes to improve on its dismal 4-9 record last year — the worst at BYU since 1955.

With that record came a big coaching turnover and the expectation of more discipline on and off the field.

Coach Kalani Sitake replaced Ty Detmer with Jeff Grimes as offensive coordinator, along with a slew of new assistants and players. The Cougars ranked 121st in offensive efficiency last season.

Both Grimes and Sitake mentioned high energy and desperation after the first day of practice, with old and new players fighting for playing time.

Though it is only March, there are several things to watch for as the team hits the field for the first time in 2018.

Who will be BYU’s quarterback?

Tanner Mangum, BYU’s starting quarterback in 2017, endured a season-ending Achilles injury on Nov. 4, 2017. Though he’s back to throwing, he will not participate in spring practices.

Backup Beau Hoge also missed the end of last season with a toe injury, but said on Monday he is “back at 100 percent” for spring ball. He was the first quarterback to play during full-squad drills and may be the guy to beat at the quarterback position.

Joe Critchlow, who finished the season as BYU’s go-to guy, will get plenty of reps in practices, but this will be an opportunity for the new recruits to prove themselves.

Zach Wilson of Draper and Stacy Conner of Wylie, Texas are both already enrolled at BYU and may surprise people with their dual-threat talents.

Wilson especially, a three-star prospect and the No. 1 ranked quarterback out of Utah, could really make some noise, even threatening the starting spot come fall.

With a revolving door of quarterbacks and raw talent at the wide receiver position, BYU’s passing game was anything but consistent last year. None of the wide receivers totaled over 500 yards, and the only player to reach the milestone was freshman tight end Matt Bushman.

Junior Moroni Laulu-Pututau suffered a serious foot injury prior to the season opener, after increasing his total yards and touchdown each of the previous two years. With his potential return and some intriguing freshman prospects, the opportunities in the air suddenly seem a lot more explosive for the Cougars.

Junior Micah Simon also looks to be a veteran presence and reliable option in the passing game.

In the running game, senior running back Squally Canada looks to improve on a breakout 2017 season where he ran for 710 yards and six touchdowns.

Other runners to watch are juniors Riley Burt and KJ Hall, and senior Trey Dye, who all experienced injuries last year, and each pose athletic options at running back.

Sophomore Ula Tolutau endured some off-the-field issues last year, but will look to return to his impressive form from last season when he was second on the team in rushing yards.

Can the offensive line hold its own?

Grimes — running an offense for the first time — has spent his entire career coaching offensive lines, and will expect nothing but the best from the front line.

At 6-foot-8 and 305 pounds, senior Austin Hoyt will be the man to watch for leadership, and returned missionary Harris LaChance leads a fresh group of incoming freshmen that will fight for playing time on the line.

“One advantage of being at BYU is that we can have size and length at every position,” Grimes said, “and that begins with the offensive line”

The strength of the offensive line may decide how successful BYU can be on offense this year, and will also show early on the impact Grimes will have on the team.

Look for intense competition between the veterans and newcomers trying to make an impression on the coaching staff and secure their spot on the line for fall practices.

Who will be the face of the defense?

Fred Warner, arguably the best player on last year’s team and the face of the defense,  graduated and is on his way to the NFL.

Warner’s brother, Troy, should see playing time at defensive back this year, but will likely take time to develop into the kind of player his older brother was.

One of last year’s captains, Butch Pau’u, is a senior, but saw his total tackles decrease last year after a stellar sophomore season.

In an interview after day one of practices, Pau’u said the coaches asked him to get into better shape for this season, and he spent the offseason getting leaner and faster.

Both are over six feet tall, and possess the length and athletic ability to make an impact in the backfield.

BYU also got 6-foot-5, 270-pound lineman Chinonso Opara out of Juan Diego Catholic HS in Draper. He is originally from Nigeria and also played varsity basketball.

He, along with 6-foot-7, 410-pound Mo Langi form a scary defensive line with size and strength to spare.

BYU has enough raw athletic talent to excite Cougar fans, but spring camp will show whether or not they have developed the skill and maturity to make the right decisions.

Check out what ESPN 960’s Ben Criddle had to say about the guys to look out for and what to expect from spring ball online in the DU Sports Podcast.