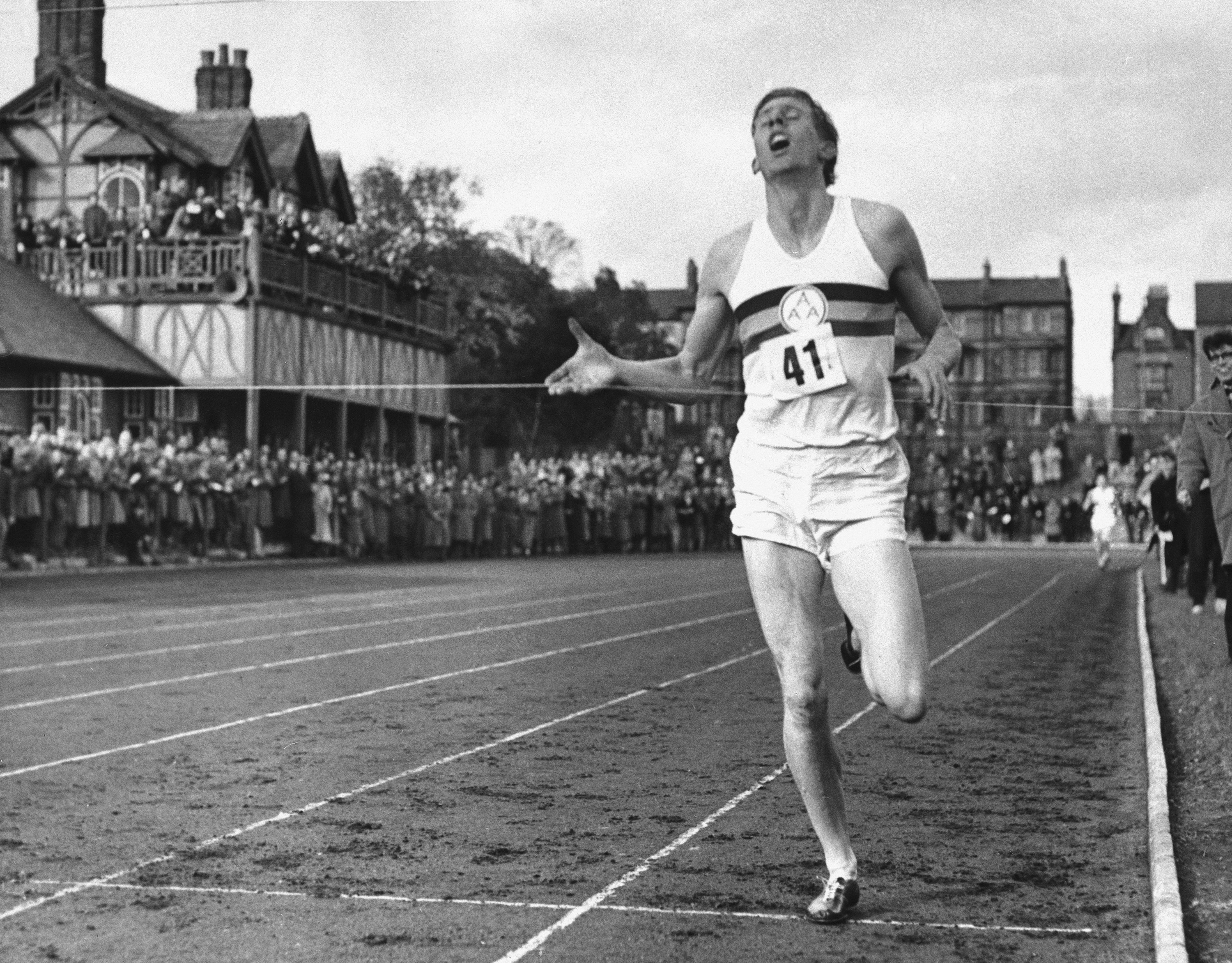 Roger Bannister, who as a lanky medical student at Oxford in 1954 electrified the sports world and lifted postwar England’s spirits when he became the first athlete to run a mile in under 4 minutes, has died at 88.

Bannister died Saturday in Oxford, the city where he accomplished the feat many had thought impossible. He had been slowed in recent years by Parkinson’s disease and, before that, an ankle shattered in a 1975 auto accident.

On a typically cool, wet and blustery English day in May nearly 64 years ago, Bannister put on his spikes and ran four laps around a cinder track in 3 minutes, 59.4 seconds, for one of the defining sporting achievements of the 20th century.

The image of the young Bannister — head tilted back, eyes closed and mouth agape as he strained across the finishing tape — captured the public’s imagination, made him a global celebrity and boosted the morale of Britons still suffering through austerity measures.

Bannister soon retired from competition and went on to a long and distinguished career in medicine, and his mark was broken over and over again, with the world record for the mile now at 3:43.13. But he was a national hero to the end.

Prime Minister Theresa May saluted Bannister as a “British sporting icon whose achievements were an inspiration to us all.”

While he will forever be remembered for his running, Bannister said he considered his contributions to neurology more satisfying.

“I wouldn’t claim to have made any great discoveries, but at any rate I satisfactorily inched forward in our knowledge of a particular aspect of medicine,” he said. “I’m far more content with that than I am about any of the running I did earlier.”

Olympic gold medalist Sebastian Coe, president of the IAAF, the international sports governing body, said Bannister’s death was a “day of intense sadness both for our nation and for all of us in athletics.”

“There is not a single athlete of my generation who was not inspired by Roger and his achievements both on and off the track,” Coe tweeted.

On the day he made history, May 6, 1954, Bannister looked up at the white-and-red English flag whipping in the wind atop a church and figured he would have to call off the attempt. But then, shortly after 6 p.m., the wind subsided, and the race was on.

With two friends running with him as pacesetters, Bannister churned around Oxford’s Iffley Road track, his long arms and legs pumping, his lungs gasping for air. He put on a furious kick over the final 300 yards and nearly collapsed as he crossed the finish line.

The announcer read out the time:

The rest was drowned out by the roar of the crowd. The 3 was all that mattered.

Bannister followed up his milestone a few months later by beating Australia’s John Landy in the “Miracle Mile” or “Mile of the Century” at the Empire Games in Vancouver, British Columbia, with both men clocked at under 4 minutes. Bannister regarded that as his greatest race because it came against his fiercest rival.

“It’s amazing that more people have climbed Mount Everest than have broken the 4-minute mile,” Bannister said in an interview with The Associated Press in 2012.

Bannister was born on March 23, 1929, in the London borough of Harrow. At the outbreak of World War II, the family moved to the city of Bath, where Bannister sometimes ran to and from school.

His passion for running took off in 1945 when his father took him to a track meet at London’s White City Stadium, built to host the 1908 Olympics. He resolved to take up running seriously at Oxford.

At the 1952 Helsinki Games, Bannister was considered the favorite for the gold in the 1,500 meters — the shorter metric-mile distance run in the Olympics. But the organizers added an extra round of heats, meaning he would have to run on three consecutive days. With his rhythm thrown off, Bannister finished fourth.

Criticized by the British press and disappointed in his own performance, he decided to keep running, dedicating himself to beating the 4-minute mile.

At the time, Bannister was a full-time medical student and had to juggle his studies with his training. By modern standards, his daily half-hour workout was remarkably light.

Sweden’s Gunder Hagg came tantalizingly close to breaking the 4-minute mile in 1945, when he ran 4:01.4. But time and again, runners came up short. Hagg’s record was still the time to beat nine years later.

“There was no logic in my mind that if you can run a mile in 4 minutes, 1 and 2/5ths, you can’t run it in 3:59,” he said. “I knew enough medicine and physiology to know it wasn’t a physical barrier, but I think it had become a psychological barrier.”

Bannister, Landy and American miler Wes Santee were all threatening to break the mark.

“As it became clear that somebody was going to do it, I felt that I would prefer it to be me,” Bannister said.

He also wanted to deliver something special for his country.

“I thought it would be right for Britain to try to get this,” he said in 2012. “There was a feeling of patriotism. Our new queen had been crowned the year before, Everest had been climbed in 1953.”

The current record has been held by Morocco’s Hicham El Guerrouj since 1999.

Bannister was chosen Sports Illustrated’s first Sportsman of the Year in 1954.

Later, as chairman of Britain’s Sports Council from 1971 to 1974, he developed the first test for anabolic steroids. In 2012, he edited the ninth edition of a textbook on nervous-system disease.

He said his most treasured trophy was the lifetime achievement award he received in 2005 from the American Academy of Neurology. He was knighted for his medical work in 1975.

Late in life, he walked with crutches inside his home and used a wheelchair outdoors.

Bannister married Moyra Jacobsson, an artist, in 1955. They had two sons and two daughters and lived in a modest home minutes from the track where he made history.