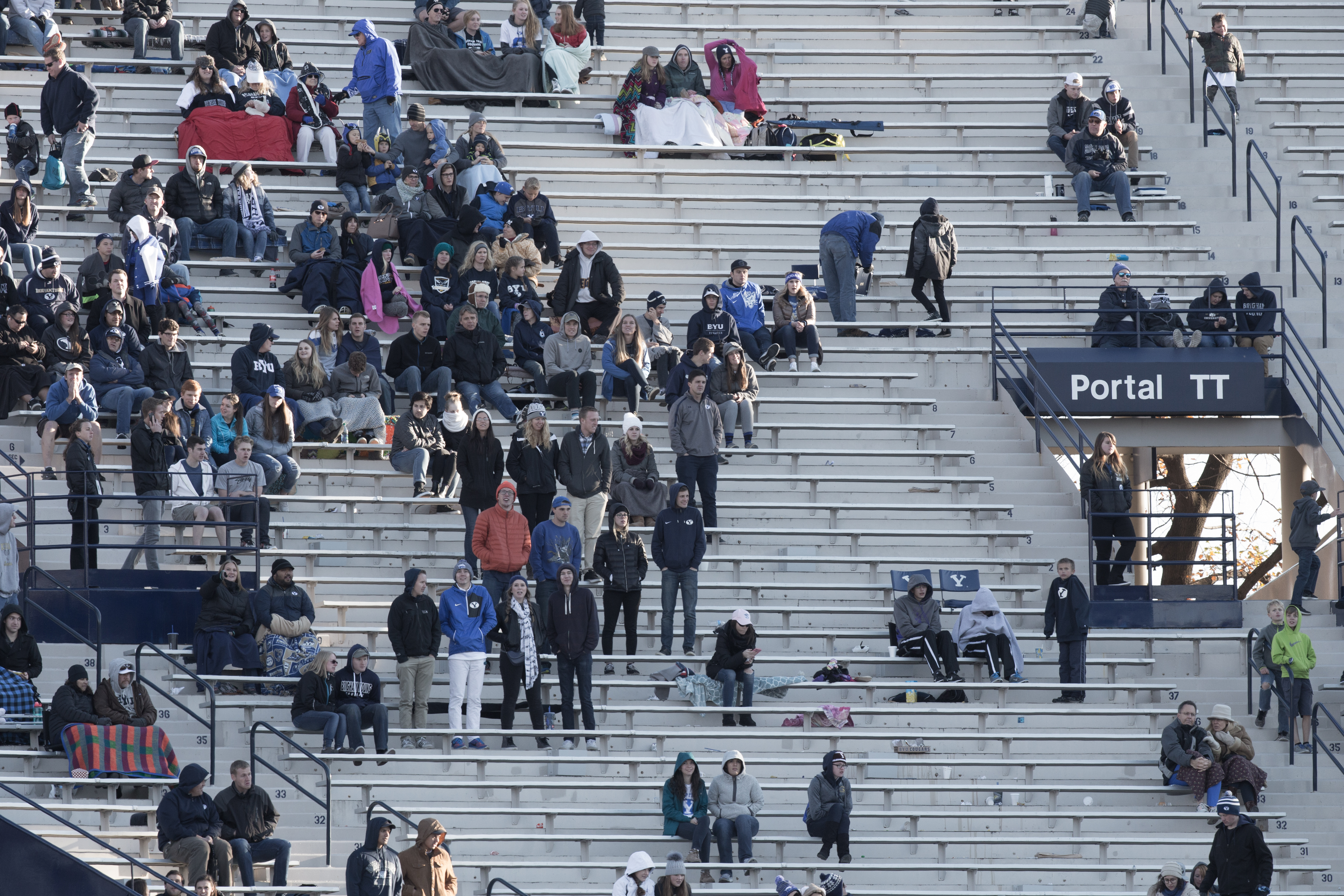 On Feb. 13 the NCAA released the official attendance records for the 2017 football season, and the findings weren’t good. Average attendance dropped by more than 1,000 across all Division I teams, and BYU was no exception.

For the fourth-straight season, BYU football failed to reach the 60,000-in-attendance threshold, averaging just 56,267 fans in the stands per game.

This represents just 88 percent capacity for LaVell Edwards Stadium, which can hold up to 63,725 people.

This change may be due to a more widespread drop in football attendance and interest in the sport in general, and not directly tied to the BYU program’s success.

The lowest, single-game attendance of the season was on Oct. 28 against San Jose State, when just 46,451 people showed up to cheer on the Cougars.

It was the smallest BYU crowd since Oct. 31, 1981, when just 36,343 fans cheered the Cougars, featuring Jim McMahon and Kyle Whittingham.

Since the expansion of BYU’s stadium in 1982, six of the ten-lowest attended games happened in the last four years.

“Despite a down year in 2017, BYU’s average home attendance was better than the average attendance in the ACC and Pac-12,” said associate athletic director Duff Tittle. “BYU also improved to No. 3 in the West in average attendance behind only USC and Washington, our highest ranking in the past five years.”

This is mainly due to the size and capacity of LaVell Edwards Stadium, which is by far the largest football stadium in Utah.

BYU has always had more fans in attendance than many schools due to its capacity, and this ranking is maintained simply because other schools either can’t hold as many fans or are losing more fans than BYU.

Whatever the reason for the drop in attendance, BYU athletics has made moves to spark more interest and increase trust in the program.

On Nov. 18 against UMass, a Wi-Fi network was beta-tested in LaVell Edwards Stadium, bringing positive fan reactions. Tittle confirmed this will be a permanent fixture starting with the 2018 season.

On the personnel side, BYU hired Jeff Grimes from LSU as its offensive coordinator, coming in with much more experience than Ty Detmer who ran the Cougar offense for two seasons before being relieved of his duties in December.

Grimes received a raise last year at LSU, bringing his total salary up to $525,000. It is doubtful he took a pay cut in coming to BYU, especially after athletic director Tom Holmoe said, in his semi-annual Q&A, the hiring was the most BYU football has ever agreed to pay an offensive coordinator.

Even with a revamped offensive staff, BYU may have more work to do to increase fan interest and bring attendance back up over 60,000.

We discussed football attendance and interviewed wide receiver Micah Simon in the latter half of last week’s DU Sports Podcast.