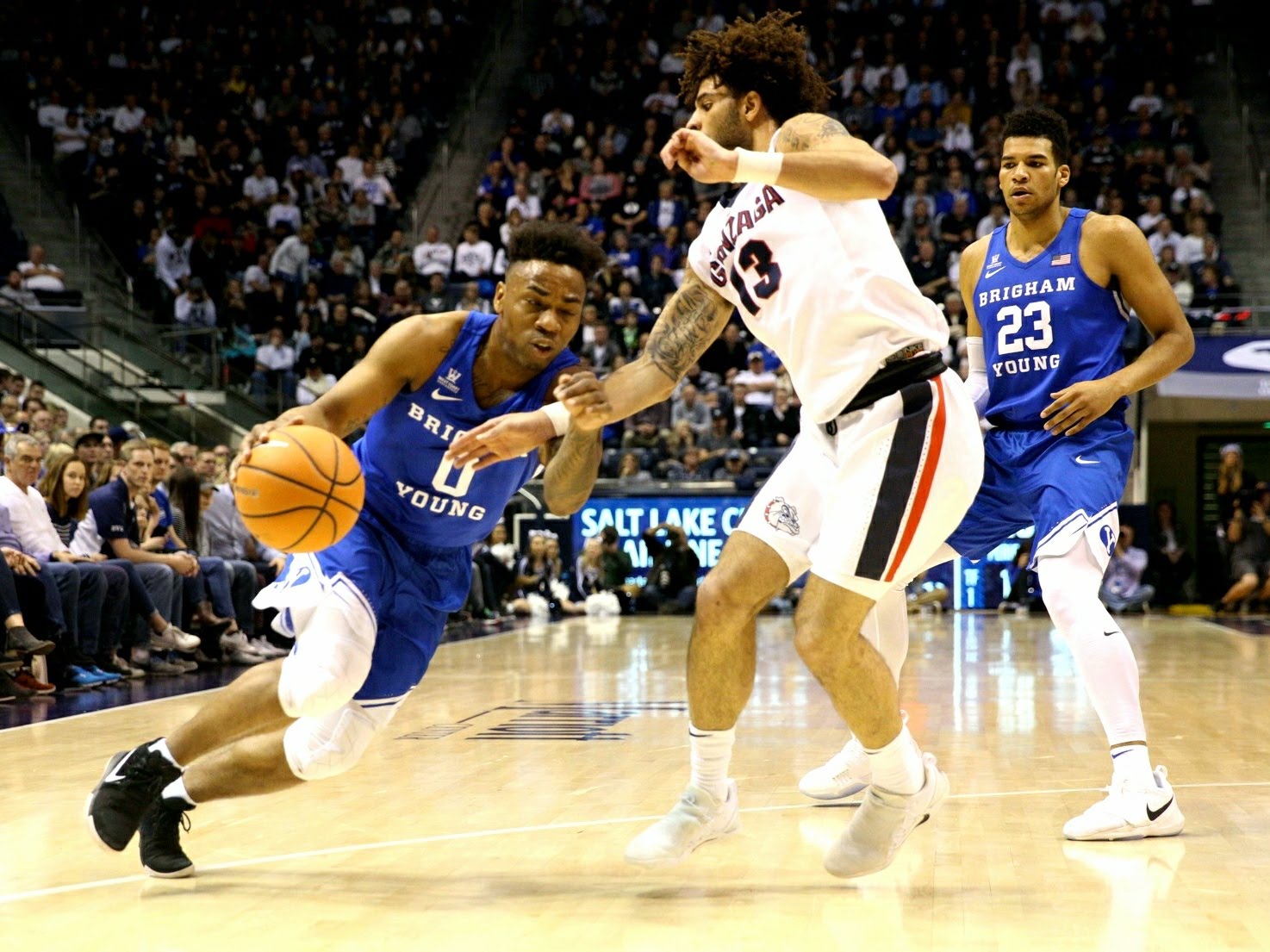 BYU men’s basketball ended the regular season on a low note, falling 79-65 to No. 6 Gonzaga in the Marriott Center on Saturday, Feb. 24.

“Congratulations to Gonzaga, for winning the (regular season) championship and coming in here and beating us,” said coach Tim LaComb. “We competed in stretches, but give credit to their guys.”

BYU opened up shooting 2-for-9 from the field in the first five minutes, allowing Gonzaga to get out to a 10-5 lead early. Elijah Bryant missed his first four shots in a row. Yoeli Childs didn’t do much better, making just one of his first five shots.

Jahshire Hardnett hit two threes from the same spot to tie his career high early in the first half. He had eight of BYU’s first ten points.

Gonzaga shot 82 percent from the field in the first 10 minutes, including nine made shots in a row. They took a 23-10 lead with 11:46 left in the first half.

Hardnett reached double-digits with 6:10 left in the first half, but also accumulated three fouls.

TJ Haws hit a deep 3-pointer and then converted an and-one to bring the Cougars back within six with 4:46 left in the half.

Back-to-back 3-pointers from Bryant brought BYU back within two points, down 38-36 with 2:10 remaining in the half.

3LIJAH with a little shake & bake for back-to-back #MACU3's!!

A deep three from Josh Perkins put Gonzaga up 43-38 to end the first half.

Perkins took another deep three, this time from the Marriott Center logo, to open the second half and put the Bulldogs up by eight.

BYU missed five consecutive field goals to allow Gonzaga to extend its lead to double digits once again, 50-40 with 16 minutes left in the game.

Childs was the third Cougars to reach double figures with 15 minutes left in the game. He also contributed eight rebounds on the night.

The Cougars went through a scoring drought midway through the second half, making just one of ten shots, and sinking their shooting percentage back under 40 percent.

Gonzaga continued its hot shooting night, taking a 15-point lead with 12:22 left in the game.

“They hit shots and we couldn’t,” Bryant said. “If you can’t make shots and can’t get stops it’s a recipe for disaster.”

The Bulldogs took their largest lead of the game, 69-48, with nine minutes left in the game.

It was all Gonzaga from there, with the Cougars never pulling back within single digits. Rose elected to go with almost entirely bench players in the final minutes.

“Our guys showed some character and battled back when they could have gone down by a lot,” LaComb said.  ” Now it’s time to start playing ‘survive and advance.'”

Next up for BYU is the WCC Tournament in Las Vegas where they will take on San Diego in the first round.

“We’ll have greater urgency on the defensive end,” Hardnett said on what the team will take from this loss into the tournament.

Opinion: American patriotism through the eyes of a noncitizen