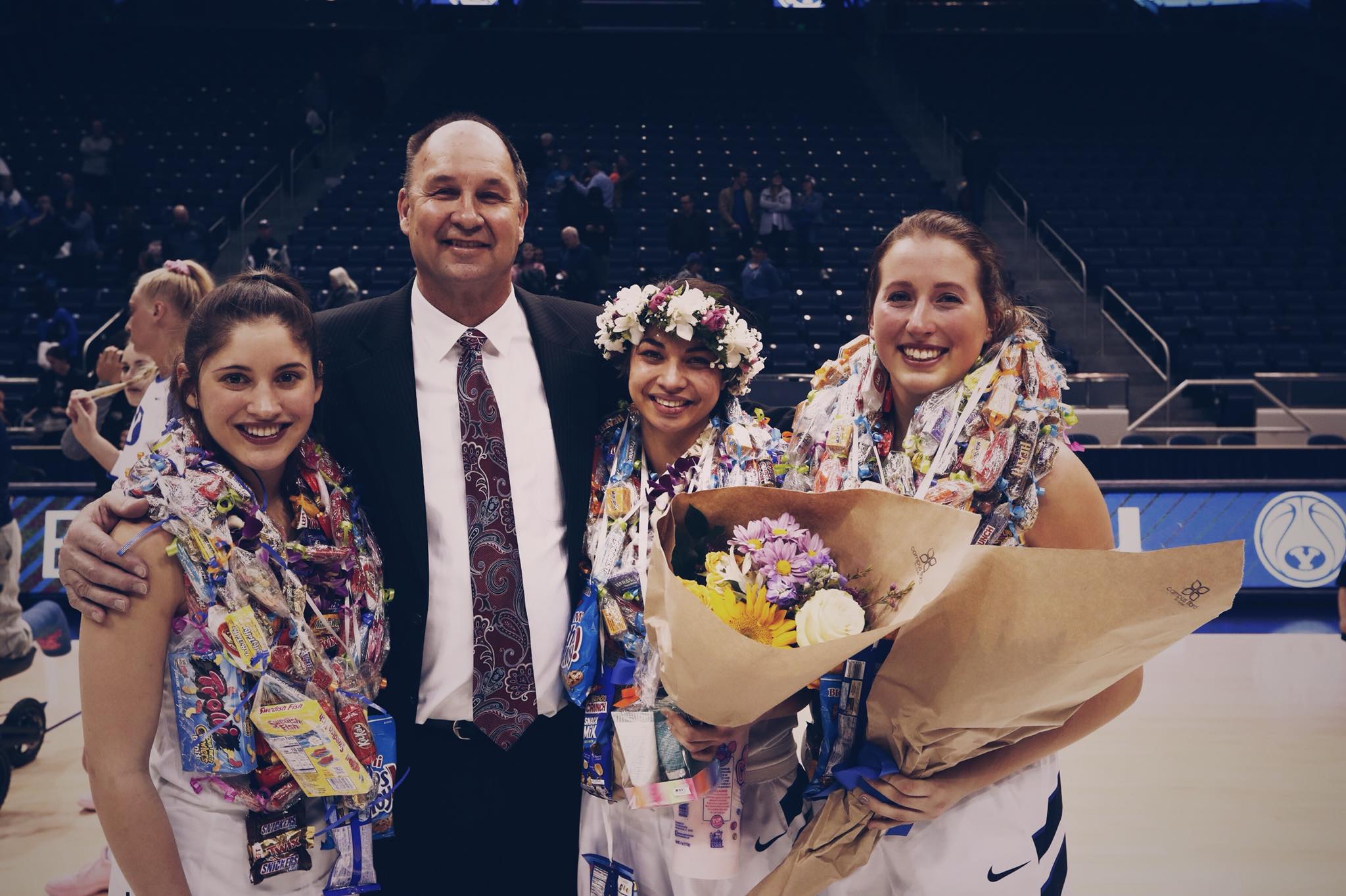 The crowd chanted “Thank you!” as seniors Cassie Devashrayee, Malia Nawahine and Amanda Wayment left the floor for the final time at the Marriott Center in a 73-35 victory over Portland on Feb. 22.

“Cassie is probably one of the best players to ever play here at BYU, Amanda does her work, she does whatever the team needs to win, and Malia played one of her best games tonight offensively,” said coach Jeff Judkins. “They are hard to replace.”

As Devashrayee and Nawahine were asked about senior night, emotions ran high.

“It was nice to have a win where we all played well,” Devashrayee said. “For me towards the end it was really sad – I got really sad. It’s been a great journey here at BYU, I wouldn’t change it for anything. It doesn’t feel like it’s my last game here.”

Nawahine played just one year at BYU, being a graduate transfer from the University of Utah, but she also expressed her gratitude to the program.

“I’m grateful that BYU let me come here – I made some of my best friends,” Nawahine explained as she looked over at Devashrayee.

Tears streamed down Devashrayee’s face when asked about what it was like having a standing ovation from the crowd at the end of the game.

“It means a lot personally. I worked really hard to give my best, and so for them to do that was a moment I won’t ever forget,” Devashrayee said. “There isn’t as many fans as the men’s team, but our fans are so loyal. They are seriously like family.”

As one of the two co-captains, Devashrayee led the team this season in points and assists while scoring in double figures every game. She received many awards over the years at BYU including West Coach Conference Player of the Year last season, WCC First Team, WCC Player of the Week and Female Crowd Pleaser Award.

Nawahine started every game this season. She scored in double-digits 13 times, and also received a WCC Player of the Week award.

Wayment, the other co-captain of the team, also started every game this season. She had seven games scoring in double digits, and led the team in rebounds in five games.

Devashrayee came out strong against Portland, making back-to-back three’s for a 15-3 lead early.

Portland’s three points were the least amount scored against BYU this season in the first quarter.

Nawahine had 14 points, four rebounds, and two steals for BYU halfway into the second quarter, maintaining a 34-6 lead.

At halftime, the Cougars had a 44-14 lead over Portland, making this their largest lead at the half all season.

The third quarter was a breeze for the Cougars as they made shot after shot bringing the score 62-29 over Portland.

“I thought it was a great game today,” Judkins said. “I thought we played the best defensively during the first quarter than we have in a long time. The way they played, the way they moved and the way they helped each other is the way that defense is supposed to be played.”

With the fourth and final quarter of the game underway, the seniors stepped off the court.

Devashrayee, Nawahine, and Wament sat side by side on the bench during the last few minutes of the fourth quarter as they shared laughs, smiles and even a few tears.

“What do you say about the seniors? I’ve been through a lot of war with those three,” Judkins added. “This is a sad day for a coach. The only thing that makes it a little easier is I’ve done this for 17 years.”

The words “Thank you Cassie, thank you Malia, thank you Amanda!” roaring from the crowd will forever be a closing memory for these three seniors and their basketball careers at BYU.