A Utah Transit Authority bus and a car collided Thursday morning in the intersection of Bulldog Boulevard and University Avenue in Provo.

According to Provo resident Orion Evans, an eyewitness to the accident, the UTA bus ran a red light and hit the car, which had two passengers. There were four passengers on the bus, in addition to the driver.

Police hadn’t yet determined fault in the accident.

Evans said the woman was unconscious until an ambulance arrived. According to Evans, emergency responders had to extricate the woman from the car.

Detective Nick Dupaix of the Provo Police Department said the two people in the passenger car were transported to the Utah Valley Hospital for their injuries. The four bus passengers were all uninjured.

This story will be updated. 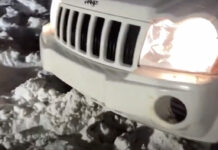