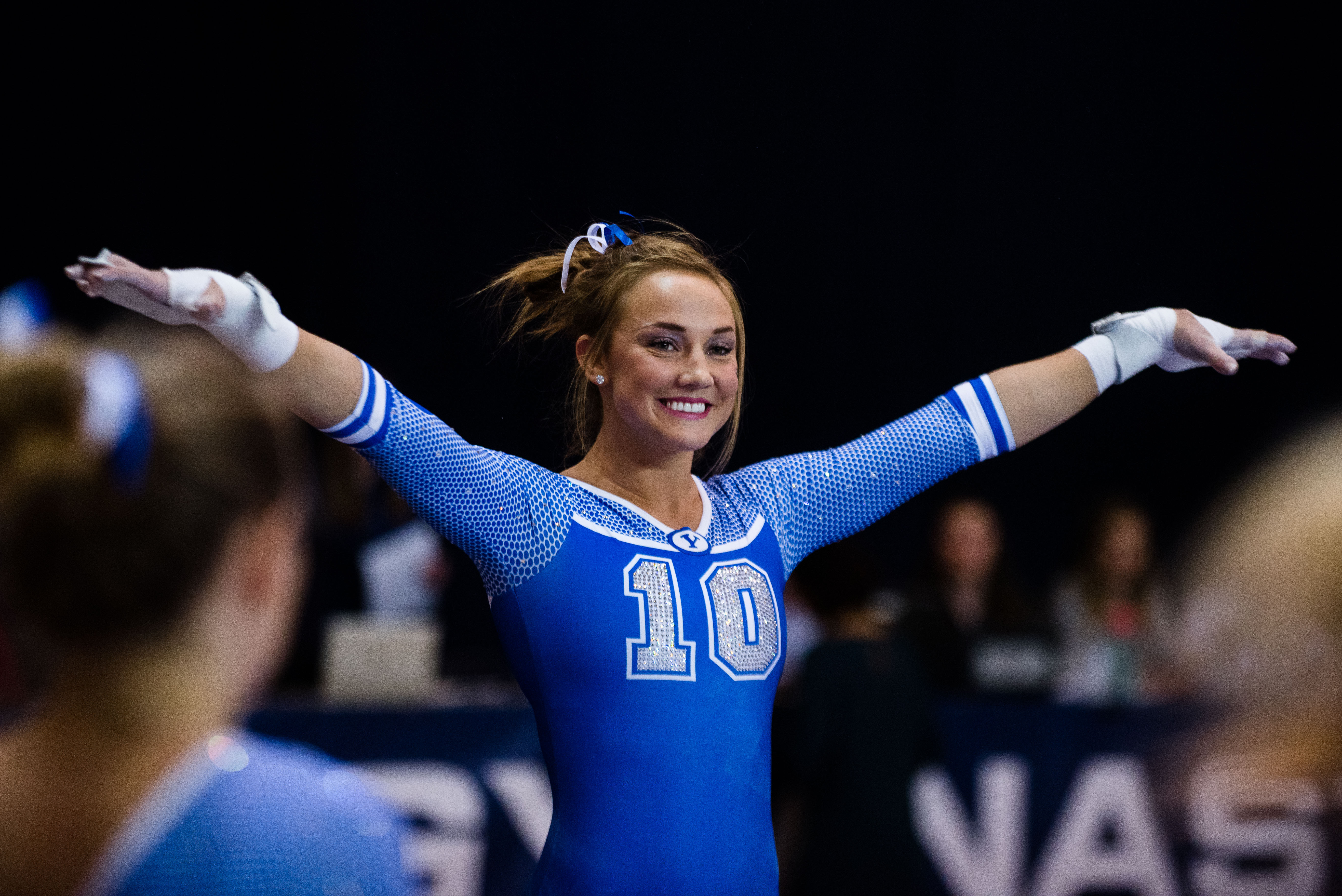 “Hard work, loyalty, and determination.” These three words can be seen on the wall as you walk into the BYU gymnastics facility. Coach Guard Young wants his team to live and breathe these words, and with record-breaking attendance and a No. 19 national ranking, it seems to be paying off.

In their meet against Southern Utah on Jan. 19, the Cougars broke their attendance record with 5,112 fans in the Smith Fieldhouse. The previous record of 4,753 attending had stood since 1999, according to BYU Athletics.

The team has also been consistently ranked in the top 25 in the nation since the early part of the season, getting as high as No. 18.

“I’m convinced that we have improved so much as a team this season mainly because of hard work,” said Young. “Hard work trumps everything at the end of the day.”

The NCAA has strict requirements on how many practices a gymnastics team can hold, allowing just 131 official days of practice each year.

This season, Young offered to keep the gymnastics facility open for any gymnasts that wanted to come and train on their own.

“This season, we trained year round, and that was something that was very new to this team,” Young explained. “The training during the summer was all on them.”

Though the summer, training was completely voluntary. Due to the NCAA limitations, most still chose to stay and train in their free time.

“This (allowed) them to be able to learn new skills to compete at a higher level,” Young added. “That is one huge factor in why we are having so much success.”

BYU gymnastics has gone through a bit of a youth movement over the past two years, being made up of mainly freshmen and sophomores.

“Not only are these kids talented but they are great workers. They are competing, they are making line up and they are taking some of the spots from the upperclassmen,” Young said. “It’s created this environment of competition amongst themselves as teammates.”

The seniors on the team have also stepped up to the competition created by the ambitious freshmen and sophomores on the team.

Senior Brittni Hawes from Idaho said she feels like her success, as well as the team’s success, can also be credited to working hard.

“We are working a lot harder and we are a lot closer as a team,” Hawes said. “I also noticed that our overall confidence as a team is a huge help this season. We are determined and ready to win a national championship – we can do it.”

The team’s main focus has been on learning and practicing good gymnastics technique.

Along with the team’s performance and techniques, another major contributing factor to their success has been the fundamentals.

“We spent a lot of time over the summer fixing fundamentals. We were making a lot of mistakes,” Young explained. “I feel like we improved a lot on our fundamentals, and our consistency and performances have been better.”

Senior Kyleigh Greenlief from Washington also said having a “team mentality” has made all the difference this year. Win or lose, everything they do is as a team.

“The biggest changes I’ve seen this year as a team are our attitude, capability, togetherness and that we are all on the same page,” Greenlief said. “We practice with confidence, and we compete with confidence.”

As for future plans and goals, BYU gymnastics is dreaming big.