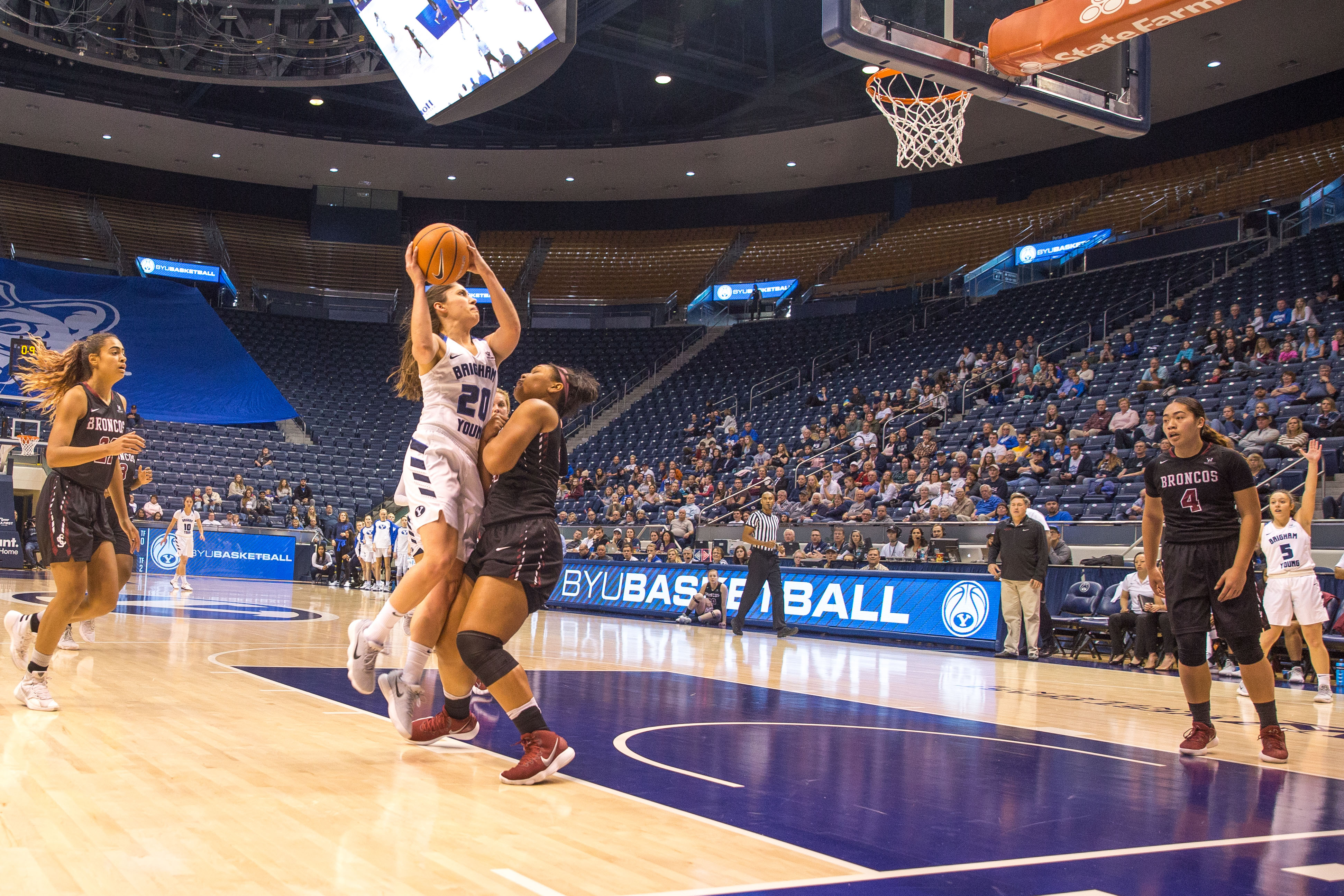 BYU women’s basketball bounced back from a loss to San Diego with a 63-54 home victory over Saint Mary’s. The team improves its conference record to 7-2, taking control of second place in the standings.

It was a physical game to start, with Brenna Chase getting fouled and hitting both of her free throws to tie the game at six.

Cassie Devashrayee got on the scoreboard soon after, putting the Cougars up on Saint Mary’s 12-8.

Chase played with confidence as she drove to the hoop and got the and-one. At the end of the first quarter BYU led the game 17-11.

The second quarter was no different, with the same high energy from the Cougars allowing them to keep momentum. Sara Hamson had a major block for BYU to keep their lead safe.

Malia Nawahine then got on the board, pushing the BYU lead to 21-16 over Saint Mary’s.

Hamson kept the blocks coming throughout the first half. She finished with a game-high eight blocks on the night.

Chase hit another three to give the Cougars the biggest lead of the game 32-25 over Saint Mary’s at the half.

Chase and Devashrayee were both in double-digits for the Cougars with 10 and 11 points.

Devashrayee stayed hot in the second half, extending the BYU lead to 41-28 as Saint Mary’s started to fall behind.

She had 18 points and five rebounds for BYU at the end of the third, and the Cougars led 49-38.

Chase showed no signs of slowing down either, opening the fourth quarter with back-to-back layups.

Every shot was falling for the Cougars as the lead soared to 58-40 over Saint Mary’s.

The Cougars went on a 14-3 run late in the fourth quarter to seal the victory.

BYU shot 45 percent from the field on the night, and assisted on over half of its shots.

“I’m really proud of these guys,” said coach Jeff Judkins. “I thought tonight we played better defense than we’ve played in a long time. It was a different kind of defensive effort—it was guarding people off the dribble, looking to help and recover while trying not to foul them.”

The Cougars travel to Pacific Saturday, Jan. 27 to take on the Tigers at 2 p.m. MST. The game will be streamed live on the TheW.tv