A homeowner places a ‘For Sale’ sign in front of their house, and quickly, the property is off the market, usually with multiple purchase offers.

A landlord places a ‘For Rent’ sign in the window and a lease has been signed within days, sometimes hours.

The United States Census Bureau reported Utah is the fastest growing state in the nation, and the state hasn’t been able to keep up with the demand for housing. For the first time in more than 40 years, the number of households exceeds the number of properties available, according to a study from the Kem C. Gardner Policy Institute. The situation has put Utah in the middle of a housing shortage that doesn’t seem to have an end in sight.

BYU economics professor Jaren Pope said the shortage is a typical case of supply not meeting demand. Utah has a rapidly growing population along with a strong job market, but other factors could also be contributing to the shortage.

“My hypothesis would be, well, we went through the Great Recession,” Pope said. “People are a little more nervous about housing because a lot of people lost a lot of money. Construction dried up in housing during that time period — nobody was building homes. It takes time for the economy to regroup and start building homes again.”

The Gardner study revealed the growth of households was higher than previously believed. It also showed that between 1970 and 2010 there was an average of 11 percent more housing available than the number of new households. Between 2010 and 2015, that number changed. With roughly 109,321 new households, only 81,656 new housing units were available — leaving 34 percent of new households without housing. 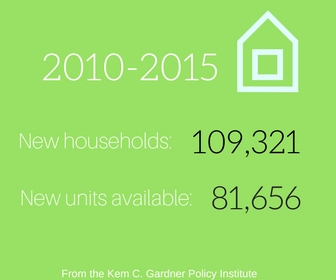 The housing shortage has left families scrambling to find a place to live and inflated the prices of available properties.

Utah real estate agent John Wallace has seen many would-be buyers become discouraged and even drop out when they are unsuccessful at finding a home. There are also fewer and fewer homes available.

“One of the main reasons that people are not putting their homes on the market is that they worry they will not be able to find and negotiate the purchase of a replacement property,” Wallace said. 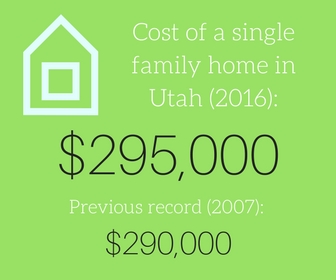 While Utah has previously been called a “starter home” market, more potential homeowners have chosen to remain in rentals or move in with family instead of facing the current real estate market. Trulia currently lists only 15 percent of available units in the “starter” ranger.

Director of the Utah County Housing Authority, Lynell Smith, said roughly 40,000 displaced families in Utah are looking for a place to live, but there just isn’t anything affordable that’s available. That number of people is large enough to fill Rio Tinto stadium almost twice. She said 15,000 of those people are in Utah County alone.

Wallace has described the current situation as being a “seller’s market” and said it can be frustrating for couples when they are outbid continually.

“They may overbid on the next home we find just to get into the market,” Wallace said. “Bidding above what we might assume to be the ‘fair market value’ of the home is quite common these days.”

Much of the developable land throughout the state is removed from current transportation systems, which means residents could be faced with long commutes and no option for public transportation.  Envision Utah statistics found that parcels of land near transportation are getting smaller and more crowded as time goes on.

These parcels are being developed as quickly as possible, but the Gardner study found builders are working at full capacity and have almost no unsold inventory. They are only limited, according to the study, by the lack of available labor.

Pope said a lag between an increase in population and the time it takes to catch up with housing is normal, and he doesn’t expect it to last more than a few years. But with the problem being even worse than believed, builders and lawmakers are scrambling to find a solution to the housing shortage.

As city lawmakers have tried to adjust zoning and building regulations to keep up with the demand, they’ve been hindered by public outrage from citizens who don’t welcome the idea of more high-rise buildings or neighborhoods.

Perkins said he’s unsure what the best solution is, but he thinks there needs to be an incentive for people to be willing to move outside of major city limits and have those areas become more developed.

“I know many apartment buildings and houses are being built, but the demand is growing faster than the buildings are going up,” Perkins said.