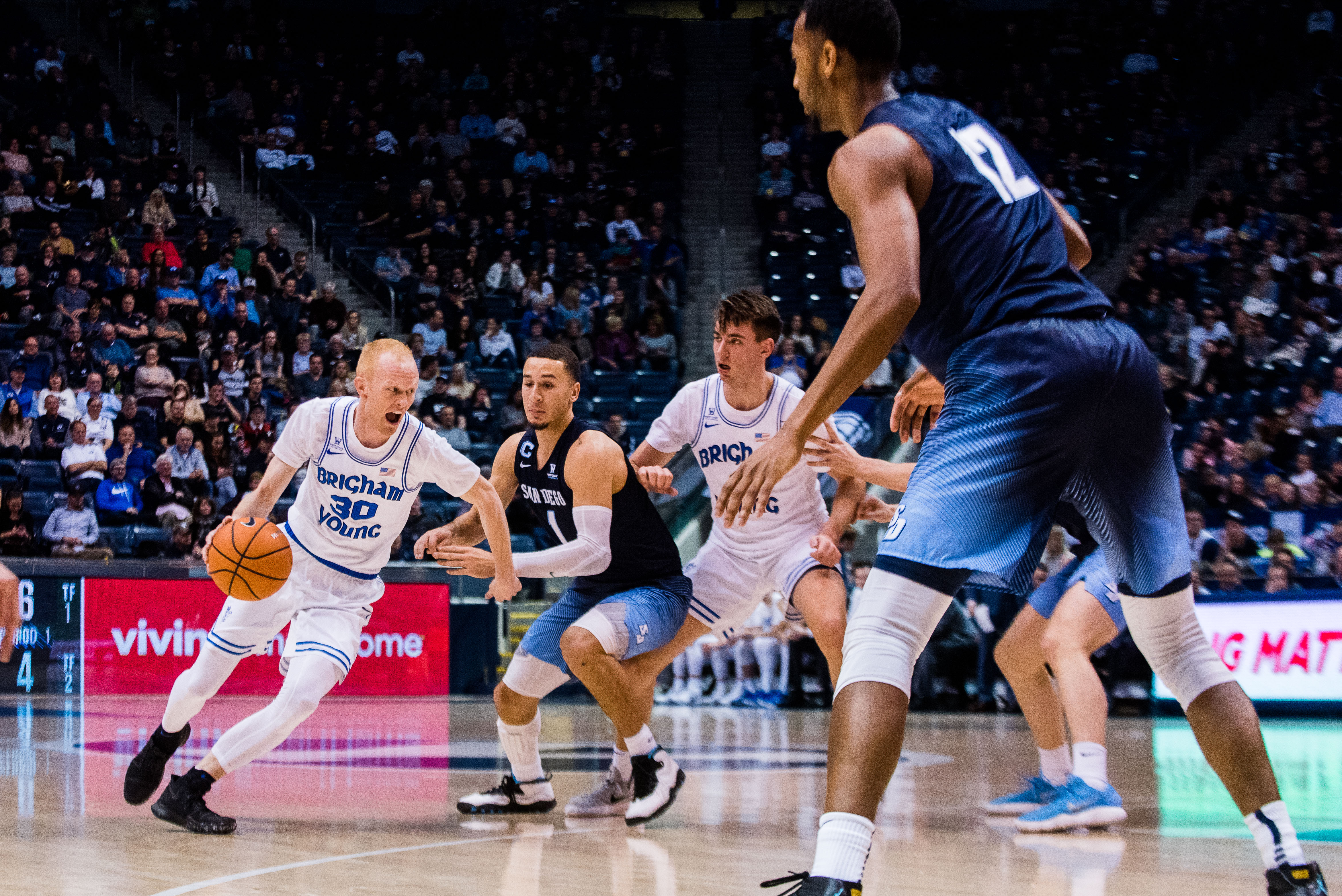 BYU men’s basketball beat the San Diego Toreros 74-58 in their second home game this week. TJ Haws matched his season-high with 24 points, including going 4-for-8 from three.

The game got off to a slow start when the Cougars missed their first five shot attempts and scored just two points in the first three minutes.

Five minutes into the game the score was 6-4 for San Diego, with BYU shooting just 13 percent from the field.

Coach Dave Rose felt that San Diego’s presence in this game made it hard on both ends of the floor for BYU. “It was a good challenge back and forth,” said Rose. “I am happy we got the win.”

BYU got four quick offensive rebounds and started scoring to give themselves the lead over the Toreros. They also brought their shooting percentage up to 40 percent with eight minutes left in the half.

Dalton Nixon came into the game in the first half after missing 11 games due to injury. This was the first game back for Nixon since Dec. 6 against Illinois State.

Near the end of the half the Cougars started expanding their lead going up eight points bringing the score 29 to 21, behind Yoeli Childs’ nine points.

San Diego’s leading scorer, Isaiah Pineiro, picked up his third foul at the end of the half. The Cougars entered the locker room up 35-26 at halftime.

As the second half started, Jahshire Hardnett was already close to a double-double with eight points and seven rebounds.

San Diego came out hot in the second half going on a 7-0 run, forcing Rose to call a timeout.

The Toreros took the lead for a couple of seconds before TJ Haws hit a three-pointer, his 14th point of the game. Six minutes into the second half BYU led 40-38.

Ten minutes into the second half San Diego tied the game again at 43, until a nice assist from Haws to Childs for three gave BYU the lead back.

TJ Haws was shooting lights out midway through the second half, going 7-for-10 from the field, including 3-for-6 three-pointers. He was the game’s leading scorer thirteen minutes into the second half with 17 points.

BYU got he lead up to 13 points on the Toreros with only four minutes to go in the game follwoing a three from Haws and an and-one from Hardnett.

At the end of the game, BYU had four players in double figures: Haws, Childs, Elijah Bryant, and Hardnett. This team effort pushed them past the Toreros, ending the game 74-58.

BYU plays again next Thursday, Jan. 25 against Saint Mary’s in Moraga, CA at 8 p.m. PST. It will also be broadcast on ESPN2.