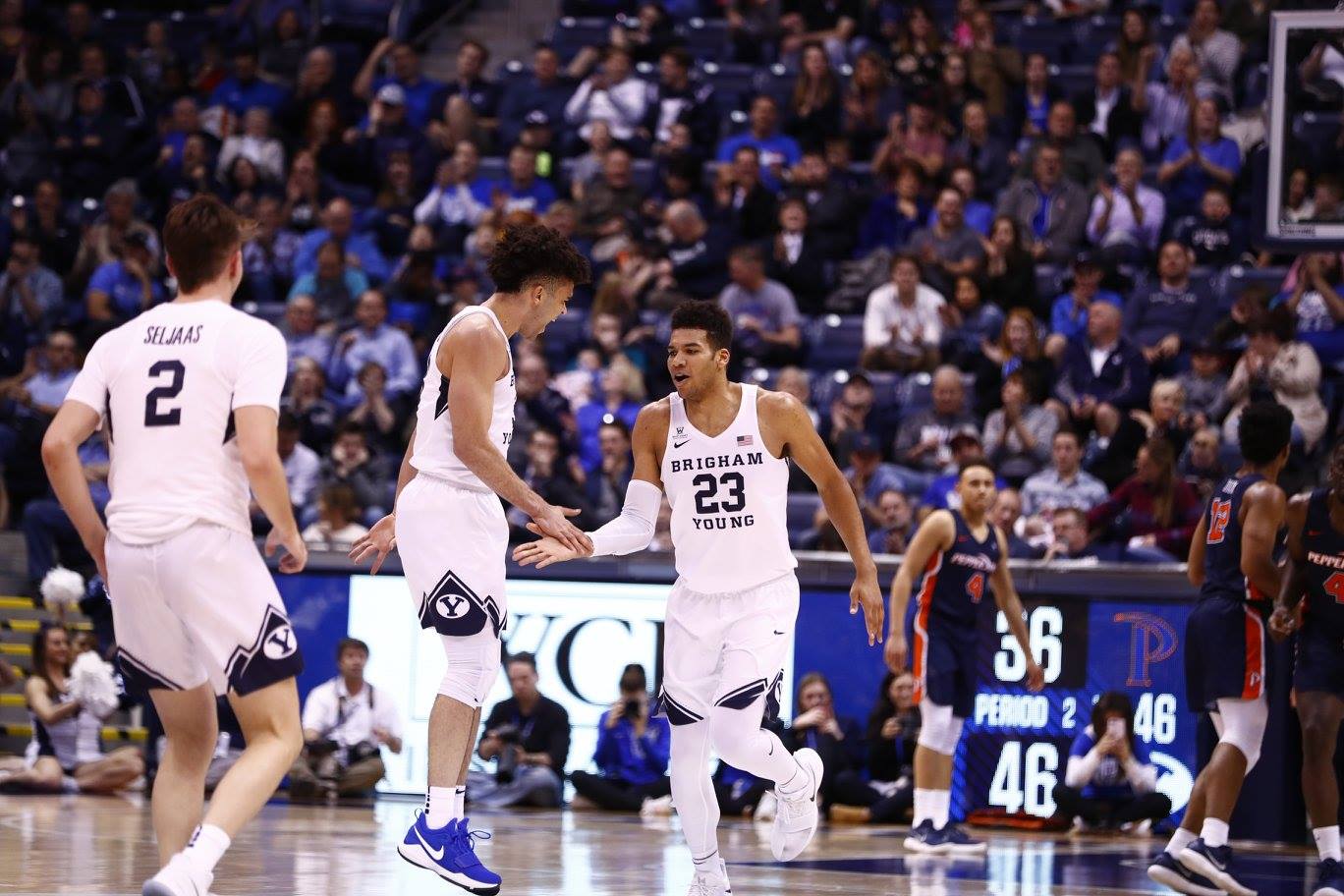 On Dec. 28 Elijah Bryant and Yoeli Childs both scored 20 point double-doubles in a 24-point Cougar victory over Portland to open West Coast Conference play. If we didn’t know it then, we definitely know it now: those two are special players, and as they go, so goes the team.

BYU is 2-0 in conference play when both Childs and Bryant score 20 or more points, and the duo accounts for nearly half of BYU’s average of 75 points this season.

Childs averages 17.8 points per game and Bryant 18.3, marking just the second time in the past five seasons that BYU has no players averaging over 20 points.

Bryant and Childs are the highest-scoring tandem for BYU basketball since Tyler Haws and Brandon Davis in the 2012-2013 season.

They are currently the highest-scoring duo in the West Coast Conference, edging out Saint Mary’s Jock Landale and Logan Hermanson by nearly two points.

Bryant and Childs also crack the top 10 in the conference for rebounds and field goal percentage.

BYU’s only conference game where one of the two did not score 20-plus points was over San Francisco, when Jahshire Hardnett stepped up and scored 11 points to match his career-high as a Cougar.

BYU’s two losses in conference play came when only one of either Childs or Bryant scored twenty or more points, and no one besides the two of them scored in double digits.

Just like Hardnett did in the game against San Francisco, BYU will need a third scorer for the Cougars to have a chance against top WCC teams Gonzaga and Saint Mary’s.

TJ Haws, BYU’s second-leading scorer last year as a freshman, is averaging 11.1 points so far this year, but scored in double figures for the first time in conference play against Pepperdine on Jan. 11.

Haws’ shooting percentages both from the field and from behind the arc are down compared to last year as well.

Forward Dalton Nixon is BYU’s fourth-leading scorer on the season, but has not seen the court since the team’s game against Illinois State on Dec. 6.

Zac Seljaas would be next in line at 6.5 points per game.

His freshman year, Seljaas was more of a wing player who lived and died by the 3-point line, but this year has seen more minutes in the paint with a depleted frontcourt.

His 6-foot-7 frame allows him to work as a forward alongside either Childs or Payton Dastrup in a small-ball rotation, while also adding another 3-point threat.

Seljaas got his first start in conference play against Pepperdine, and went a perfect 3-for-3 from the floor for eight points. He also added four assists on the night. At Santa Clara, he shot 5-for-8 from the field, scoring 11 points to tie a season high.

In the end, however, it all comes back to Haws.

The team’s transition to a slower offense and more focused defense have been a challenge for the second-year guard, who thrived in BYU’s fast-paced, free-flowing style last year.

If his shot begins to fall like last season, and he learns his place within the efficient BYU half-court offense, Haws will be a much needed third option to help the Cougars against more talented teams.

Until then, the terrific tandem of Bryant and Childs continue to carry the Cougars.  Last week against Pepperdine and Santa Clara, the two totaled 46 and 36 points respectively.

Haws scored a season-high 14 points against Santa Clara, including 4-for-5 from three. This contribution allowed for less dependance on Bryant and Childs and a more balanced attack from the Cougars, but it will take a few more games to know if he is here to stay.

Even with the scoring help, it took double-doubles from both Childs and Bryant to come away with the win, the second time in four games the two have achieved the feat.

As the season progresses, we’ll see if Bryant and Childs will get scoring help on a consistent basis to carry the Cougars to the NCAA tournament. If not, the Cougars may find themselves with a third-consecutive NIT bid.