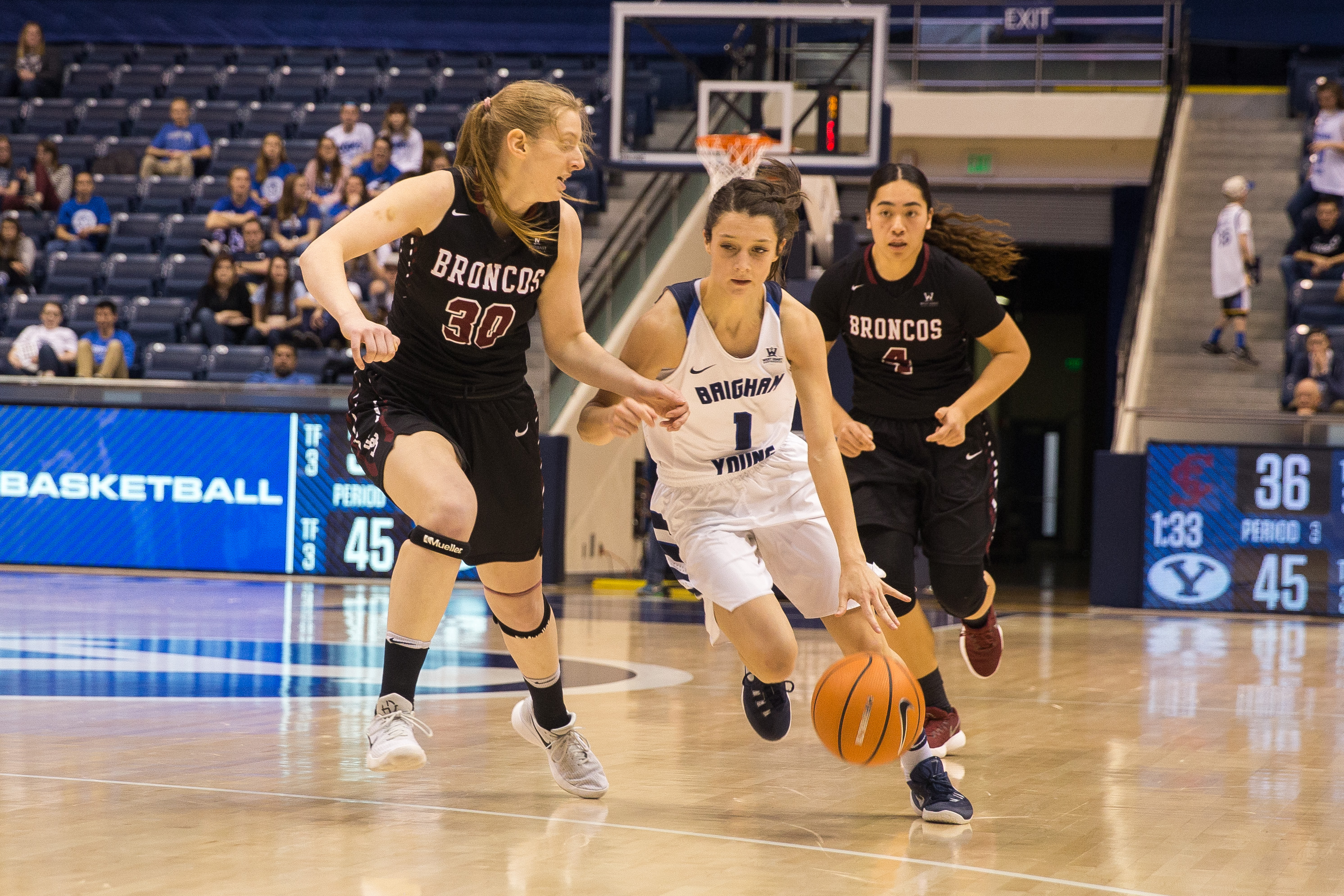 BYU women’s basketball brought home another win 67-55 over Loyola Marymount on the road to increase their win streak to five games. The victory improves BYU’s conference record to 6-1, and hands LMU their fourth-straight loss.

“We have tough games on the road, and I am glad we are able to take care of this one today,” said coach Jeff Judkins. “I was really impressed with Brenna (Chase) and Cassie (Devashrayee) today. Brenna is a tough kid. She shot the ball well and made some great passes and plays today. The game is coming more easily to her.”

Chase and Devashrayee combined for 51 points and led the Cougars in a dominant fourth quarter where they outscored LMU 28-16.

After a back-and-forth affair, however, the Lions took an 18-9 lead to end the first quarter.

Clutch shots by Sara Hamson and Maria Albiero trimmed the lead to just two, as the Cougars trailed 24-22 in the second quarter.

With a couple minutes left in the second quarter, Devashrayee hit another huge 3-point shot to give the Cougars their first lead over the Lions 27-26.

The energy from both teams began to rise as the game became competitive once again.

BYU continued its strong play in the second quarter to lead LMU 31-30 going into the half.

In the middle of the third quarter, Devashrayee got up to 19 points for the Cougars to maintain a one-point lead over the Lions 35-34.

Chase joined the 3-point party in the third quarter, getting up to 10 points, and increasing the BYU lead to 38-37.

Chase with another 3-pointer to open the fourth quarter, and keep the Cougars up 42-41 on LMU.

She then hit a two-point shot to give BYU their largest lead of the game 46-42.

Chase stayed hot, hitting another three to put the Cougars up 49-44 over the Lions.

Chase really got in the zone and performed well under pressure in the fourth quarter.

Hamson followed Chase’s lead by putting up another bucket, followed by a rebound. BYU slowly started to increase the lead over the Lions 51-44 with nine minutes left in the fourth quarter.

The Lions were forced to foul to buy time for a doubtful comeback.

Despite some struggles on offense (21 turnovers, 37 percent from the field), the Cougars were able to out-rebound the Lions and protect the paint with six blocks.

Defense won the night, as BYU held LMU to its second-lowest point total of the season, allowing just 55 points on the road.

The Cougars improve to 6-1 in conference after taking down LMU 67-55!!#GoCougs #BYUWBB pic.twitter.com/D57P0CGamg