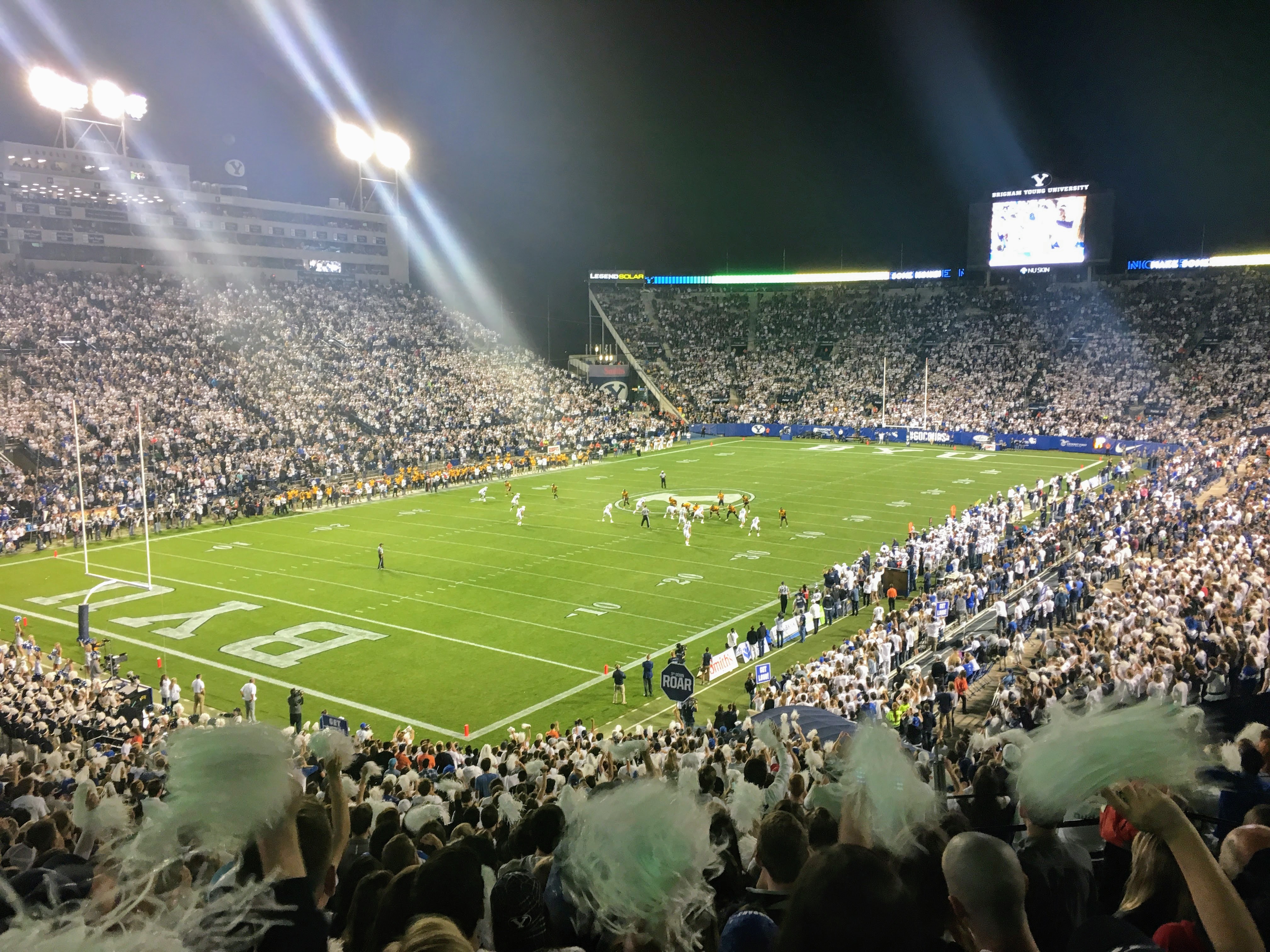 In-stadium Wi-Fi and live streaming are giving Cougar fans a chance to interact and contribute to games in ways they couldn’t in the past.

Despite rumors and years of fan complaints, this was the first announcement of Wi-Fi coverage for any BYU athletic venue.

In today’s online world, most people expect to be able to connect to the internet everywhere they are, and especially at sports venues, where they share photos and game updates.

In 2014, 32 college football stadiums and 20 NFL stadiums already had Wi-Fi systems, according to Bloomberg and Social Sign In, with the leagues and conferences encouraging the other teams to follow suit.

“Lack of internet is one of many reasons why people don’t attend (football games),” said Zachary Lowder, who worked in the department that maintains the University of Utah’s Rice-Eccles Stadium, in a 2015 Daily Universe article.

BYU is four years late in joining the Wi-Fi party — a wait that was more than long enough for fans, whose reactions after the announcement and implementation were nothing but positive.

“We were in one of the test sections last game and it was a strong signal the whole game,” said Reed Beatse on Twitter.

Paul Stokes, another Twitter user, said the Wi-Fi also worked great for him.

It appears that the beta test was only available in certain areas of the stadium, and it is unclear what the plans for the network are going forward. Neither BYU Athletics nor Horizon responded to inquiries into future plans.

Wi-Fi implementation in LaVell Edwards Stadium is just the latest in a series of technological advances and growth for BYU Athletics.

For several years now, BYU games have been streamed live over the internet, and the number of streamed events is steadily growing.

The most recent high-profile recent stream was the men’s basketball game between BYU and No. 25 ranked Alabama on Nov. 24 in Brooklyn, New York. Stadium Sports hosted the stream through a Facebook live event.

Fans encountered technical difficulties early on: the stream did not connect for the entire first half.

“Is this a joke? All I have seen in the 5 minutes I’ve been here is a message saying ‘Something went wrong. Sorry, we’re having trouble playing the video,’” said Facebook viewer Ben Burton.

The hosts created a second link for the second half that worked much better, amassing over 118,000 views.

Stadium even gave the fans a chance to choose who they wanted to hear from in the post-game interview by commenting and using the hashtag #BAMAvsBYU.

Though the comments were somewhat critical during the early technical difficulties, several fans expressed their satisfaction with the ease and convenience of viewing over an internet stream.

“Go Cougars, watching live from Bluffdale, Utah,” viewer Brandon Branch said in the Facebook comments. “I don’t understand the criticism of watching the game in this format. I’m chromecasting in HD to my big screen and following comments on my phone. No commercials and free, can’t beat that.”

The game against UMass the following day at the Barclays Center in Brooklyn was also streamed on Facebook with Stadium, this time going off without a hitch.

Cougar fans would usually have no way to view away games that are not broadcast nationally, but thanks to Facebook and other streaming mediums, they are becoming more accessible.

In January 2018 alone, according to the Cougar Athletic calendar, at least 21 BYU athletic events will be streamed live over the internet, with varying degrees of accessibility based on cable plans and regions.

BYUtv programming is streamed live on its website, meaning every sporting event broadcast on its TV channel will also be available anywhere in the world that has internet.

In the Facebook streams, fans can respond to the hosts and commentators as well as each other, sharing predictions and insight with each play.

And stadium Wi-Fi allows fans to share content from their game experiences, such as photos and videos, as well as stay up-to-date on game stats and injuries.

Though it has taken BYU a few years to catch up to the rest of the sports world in technology, expect things to keep growing and developing as the fans and sponsors realize its positive impact.