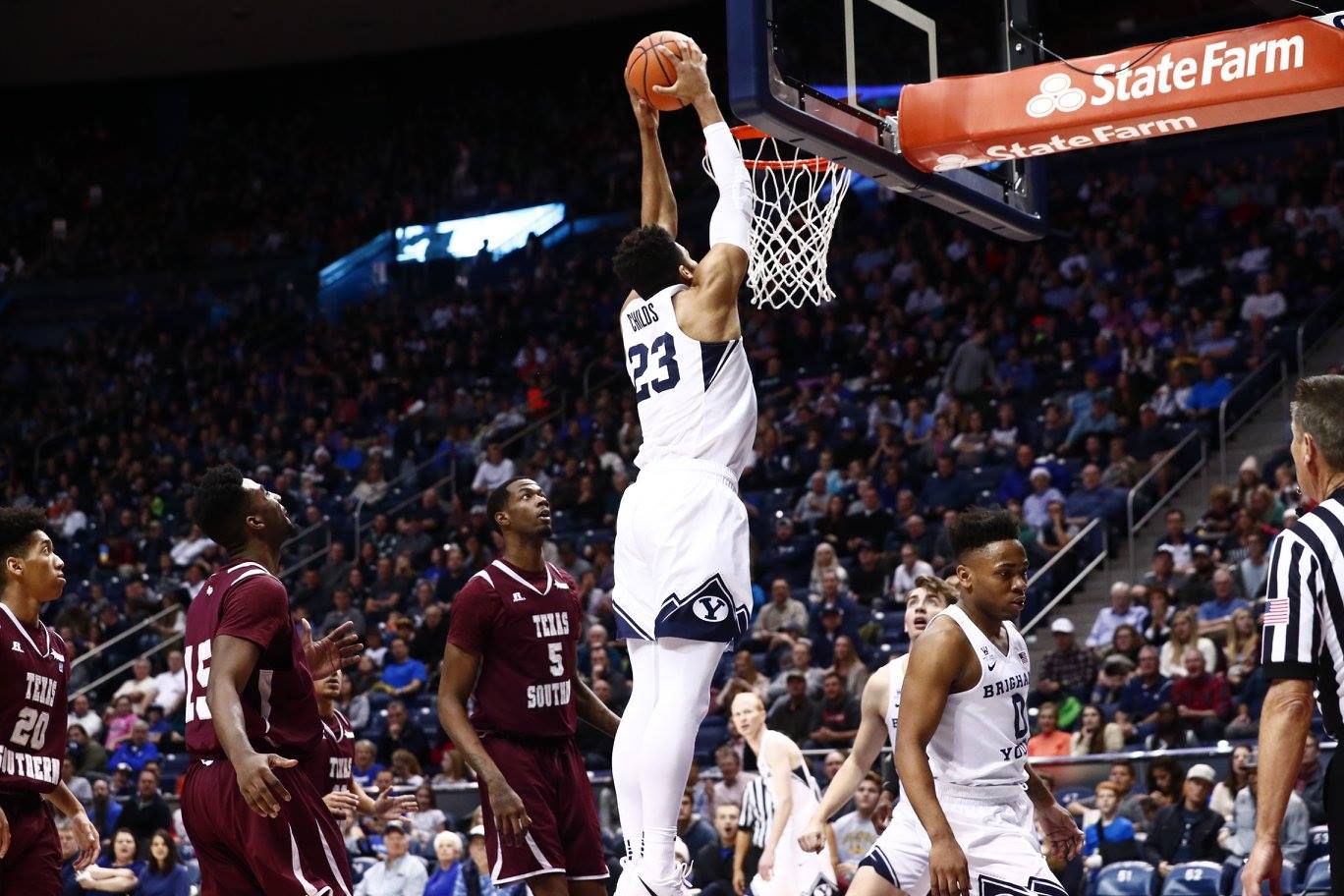 BYU improved its record to 11-2 and finished non-conference play with a 73-52 win over Texas Southern. Yoeli Childs led the charge with 19 points and eight rebounds.

Though it wasn’t the best shooting night for the Cougars, they were able to trust each other and stay focused on both ends of the floor to stay in control.

The team finished with 19 assists, forced 17 turnovers, and won despite no one crossing the 20-point threshold.

The game got off to a rough start, with both teams shooting below 40 percent, going into the first timeout tied 5-5.

The score remained close for the next several minutes, before threes from Elijah Bryant and Zac Seljaas allowed the Cougars to pull away to a 19-11 lead midway through the half.

Payton Dastrup entered the game for Childs, who started the game 1-for-6 from the field, and gave the Cougars the lead again with 7:42 to go.

7-foot-2 Trayvon Reed gave BYU a tough time on the boards early, battling with Childs for every rebound.

Texas Southern continued to keep it close for the remainder of the first half, and took a 22-21 lead with 5:33 left.

Both teams struggled to score in the final minutes of the first half, shooting under 50 percent.

Texas Southern took their largest lead 28-24 before Jahshire Hardnett got on the board with a 3-pointer to bring BYU within one.

Solid inside play from Luke Worthington and a quick fast-break layup by Hardnett gave the Cougars a 31-28 lead heading into halftime.

Worthington led BYU with six points and five rebounds in the first 20 minutes.

Following a poor shooting performance in the first half, BYU opted to get to the paint for higher percentage shots.

After going 1-for-7 from the field in the first half, Childs got a slam dunk off an assist from Hardnett early in the second half.

Texas Southern’s Donte Clark led the Tigers with 15 points in the second half, but headed to the bench with four fouls early in the period.

BYU took advantage of the situation to extend its lead to 10 with 12:32 left in the game.

Dastrup hit his first three of the night to give BYU a 48-35 lead, before the Tigers hit back-to-back threes of their own to bring it back within single digits.

Shooting woes continued to hinder the Cougars in the second half, shooting under 40 percent from the field and from three, with no single player making more than one 3-pointer.

The foul trouble continued for the Tigers, as BYU entered the bonus with over eight minutes left in the game.

Free throws from Dastrup extended the BYU lead back to double-digits.

McKay Cannon got on the board with a 3-pointer, giving BYU a 57-43 lead with seven minutes left.

The Tigers’ Marquis Salmon then fouled out trying to contest a dunk by Childs, finishing with 10 points and six rebounds.

Clark followed him to the bench just minutes later after trying to stop Cannon on the fast break.

BYU’s focus on shots close to the basket gave them a 32-8 advantage in points in the paint for the game.

Haws was the only other Cougar in double figures with 11 points, thanks to his fearlessness in driving to the hoop.

“I saw a lot of growth in our team,” said coach Dave Rose. “A lot of things we showed tonight can help out down the road when trying to win a conference championship.”

The Cougars start WCC play Dec. 28 in the Marriott Center against Portland. Tipoff is at 7 p.m. MST and the game will be broadcast on BYUtv.