Elder D. Todd Christofferson spoke to students about the importance of gratitude, Jesus Christ, and the power of the Atonement in his Christmas-themed devotional address.

Elder Christofferson began his remarks by acknowledging the stressful nature of the holiday season for students. He wished the students the best on their finals and asked that there be “a little divine aid added in for good measure.

Elder Christofferson continued by telling stories of pioneers and their Christmas experiences from years ago. Though most of the pioneers from his stories had very little earthly treasures to be thankful for, Elder Christofferson said they were still happy with the love they had for each other, and were grateful for the things they did have.

“Let us be especially thankful for family and friends and the necessities and
comforts of life,” Elder Christofferson said.

Elder Christofferson continued his address by expressing gratitude for the opportunity he has at this time of year to remember the prophet Joseph Smith, who’s birthday is on Dec. 23.

“Through the Book of Mormon and by his visions and revelations, Joseph has revealed
Jesus Christ in his true character as the Only Begotten Son of God and Redeemer of
mankind,” Elder Christofferson said.

Elder Christofferson then shifted his focus to the Savior, Jesus Christ. He asked the question, “Can’t God do whatever he wants and save us just because he loves us, without the need for a Savior?”

He said in today’s world there are many people with this question. They believe in a life after death, but assume that since God loves us he will just “take care of things.”

“Lucifer’s plan was founded on coercion, making all the other sons and daughters of God —all of us — essentially his puppets,” Elder Christofferson said.

Elder Christofferson continued by saying Heavenly Father’s plan offered us an “essential mortal experience.” He said this means the Father’s plan was designed to give us opportunities to choose. One of the purposes of our earthly experience is to demonstrate our ability to make good choices.

“This requires a knowledge of good and evil on our part with the capacity and opportunity to choose between the two, Elder Christofferson said. “It requires accountability for choices made — otherwise they aren’t really choices.”

Elder Christofferson said it is only through Jesus Christ that we can find true peace and happiness in this life. He said he understands students lead busy and hectic lives, but encouraged each listener to take an hour at some point over the Christmas holiday to reflect on the wonder and majesty of the Son of God. 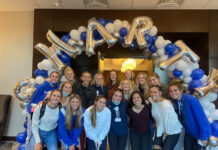