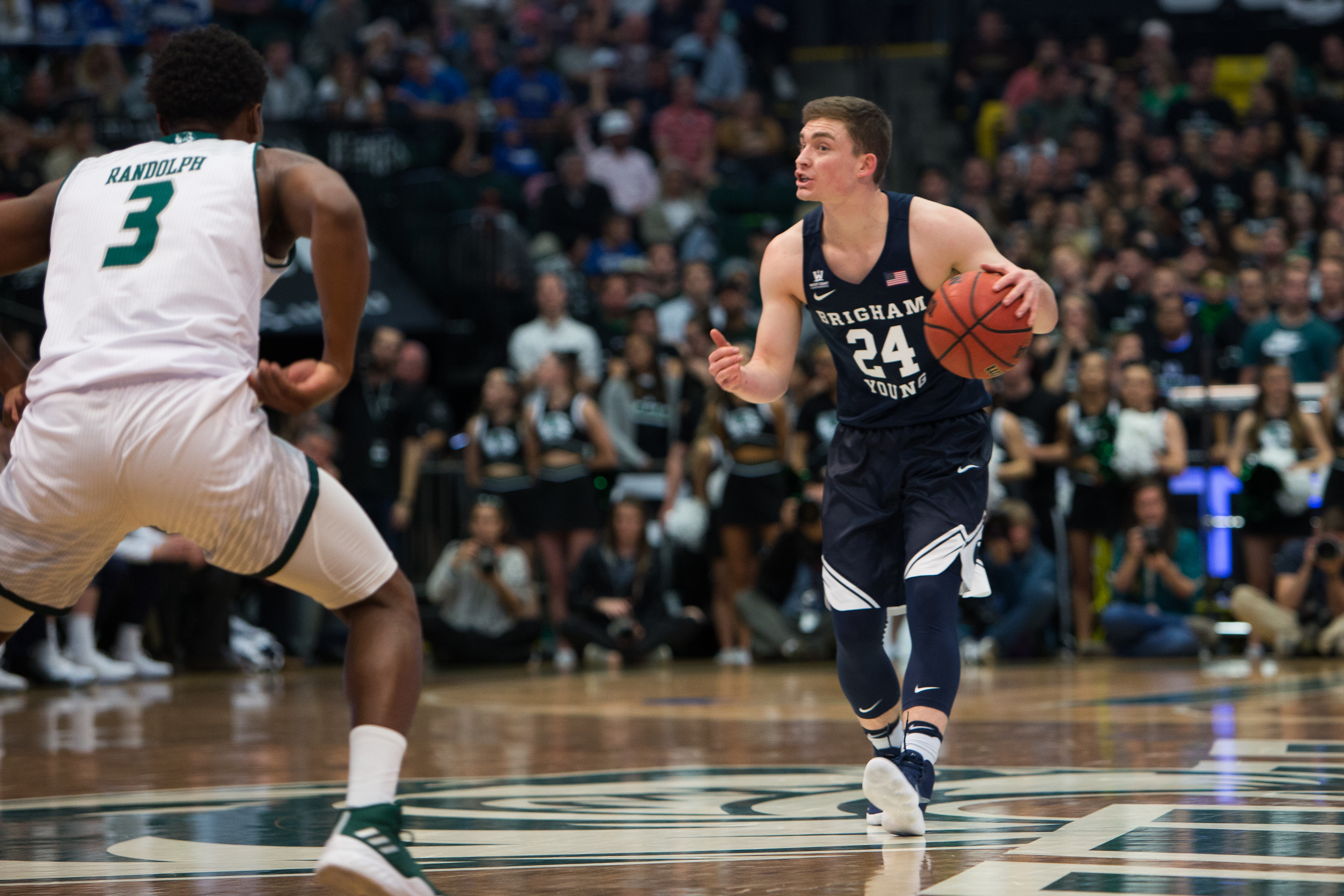 BYU men’s basketball came away with a 75-66 win over Utah State in Logan, Utah, to improve its record to 6-2 on the season.

Both teams shot under 50 percent from the field in a slow-paced, defensive matchup.

McKay Cannon, the surprise story of BYU’s win over UVU, matched Childs’ 17 points in 31 minutes off the bench.

Cannon hit his first five shots of the game and went a perfect 8-for-8 from the free-throw line.

The shooting struggles started early for the Cougars, who missed their first 10 3-pointers.

The Aggies, on the other hand, hit four of their first eight shots from deep.

Utah State led 12-5 midway through the first half, with Koby McEwan finding his shooting stroke for the Aggies. He ended the night with a game-high 20 points, including five three-pointers.

Dalton Nixon helped spark a comeback for the Cougars late in the first half, contributing five points, three boards and two assists off the bench.

Childs then re-entered the game and scored five quick points, giving the Cougars a 28-24 lead heading into halftime.

The teams shot a combined 32 percent from the field in the first half and committed 23 fouls in total.

Both teams shot nine free throws in the first half, with BYU making eight and the Aggies only two.

Accuracy from the charity stripe went on to be an important factor in the game as USU left 13 points at the line, hitting only 10 of its 23 free throws while BYU finished 24-for-28 on the night from the free-throw line.

TJ Haws and Elijah Bryant struggled early for the Cougars, picking up three fouls apiece early in the second half, and going a combined 2-for-10 from the field.

With the two starting guards in foul trouble, Cannon got his chance to shine handling the ball for BYU. He played the third-most minutes on the team in just his second game as a Cougar.

USU went on a 9-0 run early in the second quarter as  BYU’s shooting woes continued.

McEwan and Sam Merrill both scored in double-figures and were the only two USU players to log over 30 minutes of playing time.

Both squads began to find their shooting touch midway through the second half, and Bryant and Cannon hit back-to-back 3-pointers to end an Aggie run.

The game remained close until Bryant hit a go-ahead 3-pointer to give the Cougars their first double-digit lead with three minutes left in the game.

Bryant fouled out in the final minute of the game and finished with 15 points and six rebounds.

USU was forced to foul to extend the game, and the Cougars hit nine of their 10 free throws over the final minutes to seal their third win in a row and go 2-0 on their Utah road trip.

BYU returns to the Marriott Center to host Illinois State on Wednesday, Dec. 6. The game will begin at 7 p.m. MST and will be televised on BYUtv and broadcast on BYU Radio.