Editor’s note: This story is paired with “BYU and other schools have difficulty attracting education majors“

The United States is currently in the middle of a teacher crisis that isn’t expected to improve anytime soon. According to a study by the Learning Policy Institute entitled, “A Coming Crisis in Teaching? Teacher Supply, Demand and Shortages in the U.S.” the annual teacher shortage could surpass 100,000 by 2018.

This is the worst teacher shortage the United States has seen since the 1990s. As a result of the Great Recession of 2007-09, schools were forced to layoff teachers. Now that the economy has recovered, schools are looking to hire more teachers to balance out the teacher-to-student ratio and reinstate programs that were previously cut. However, that is proving difficult. 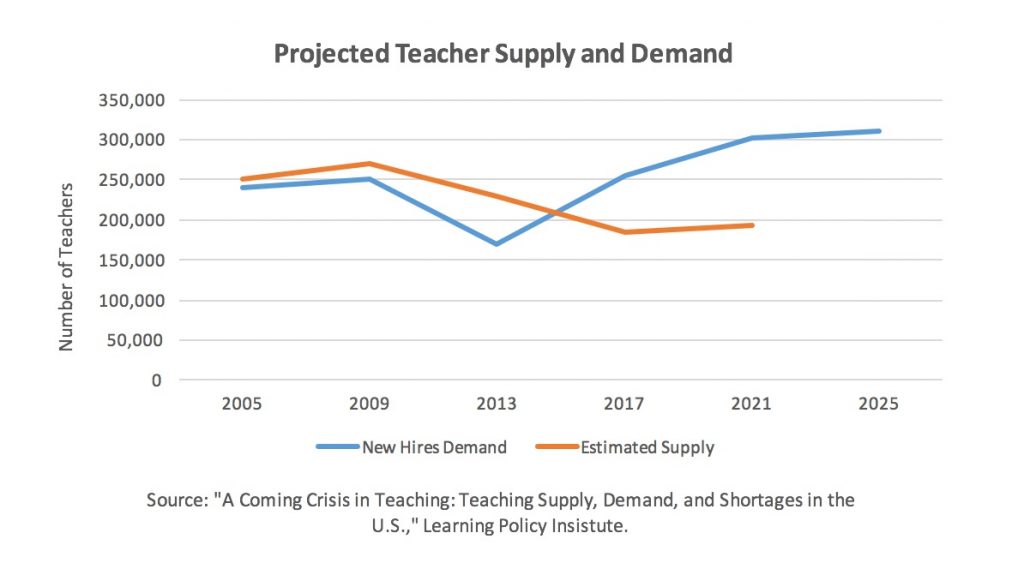 To return the current national average student-teacher ratios at 16 to 1 to the former pre-recession ratios of 15.3 to 1 would require the hiring of 145,000 additional teachers on top of standard hiring needs, according to the study.

Researchers found that fewer people are entering teacher-preparation programs and many teachers are leaving the field before they retire.

Americans are not as interested in education as a profession as they were in previous generations because of the low income and lack of benefits. In addition, the study found that nearly two-thirds of teachers who have left the education field before retiring cited dissatisfaction with their job as their reason for leaving.

As a result, schools have been forced to hire uncertified teachers as a result and the pupil-to-teacher ratio hasn’t declined.

Linda Rollins, a 7th grade choir and Utah Studies teacher at Joel P. Jensen Middle School in West Jordan, said her school has been impacted by the teacher shortage.

“Some of our teachers don’t have certificates and are working towards them. We are especially short on STEM teachers and it shows through our state testing,” Rollins said.

There has been a dramatic decrease in people enrolling in teacher-preparation programs or college students choosing education majors, making it increasingly difficult to overcome these shortages.

Emily Eastman, kindergarten teacher at Reagan Academy in Springville, said more people would likely be interested in teaching if it offered better benefits such as health care, 401k matching and higher salaries.

“I definitely think that if teaching had better benefits like it used to a couple (of) decades ago, more people would be drawn to the field,” Eastman said.

She also said more men would consider education if they felt certain they could support their families on a teacher’s salary.

Another source of contention among some teachers is the lack of control of the curriculum in their own classrooms.

“I love working at a charter school because when I’ve needed help or wanted to change something, for example, when I found that current math curriculum wasn’t improving student scores like another program could, I was able to just walk down the hall and show data to the principals,” Eastman said. “I didn’t have to work through a district.”

Rollins shared another perspective on why fewer people are entering the education field.

“Personally, I believe less women now go into education because they have more options and encouragement to pursue careers in other fields than they have in the past,” Rollins said.

As a result, schools across the country are suffering and failing to both recruit teachers and to retain those they currently employ.

The Learning Policy Institute found that about eight percent of teachers leave in any given year over the past decade. This rate is even higher among new teachers and those in high-poverty school districts.

Many school systems are trying to attract more teachers and maintain the teachers they do have by offering more competitive pay. Whether the change will reverse the current trend and bring people back to the profession is yet to be determined.