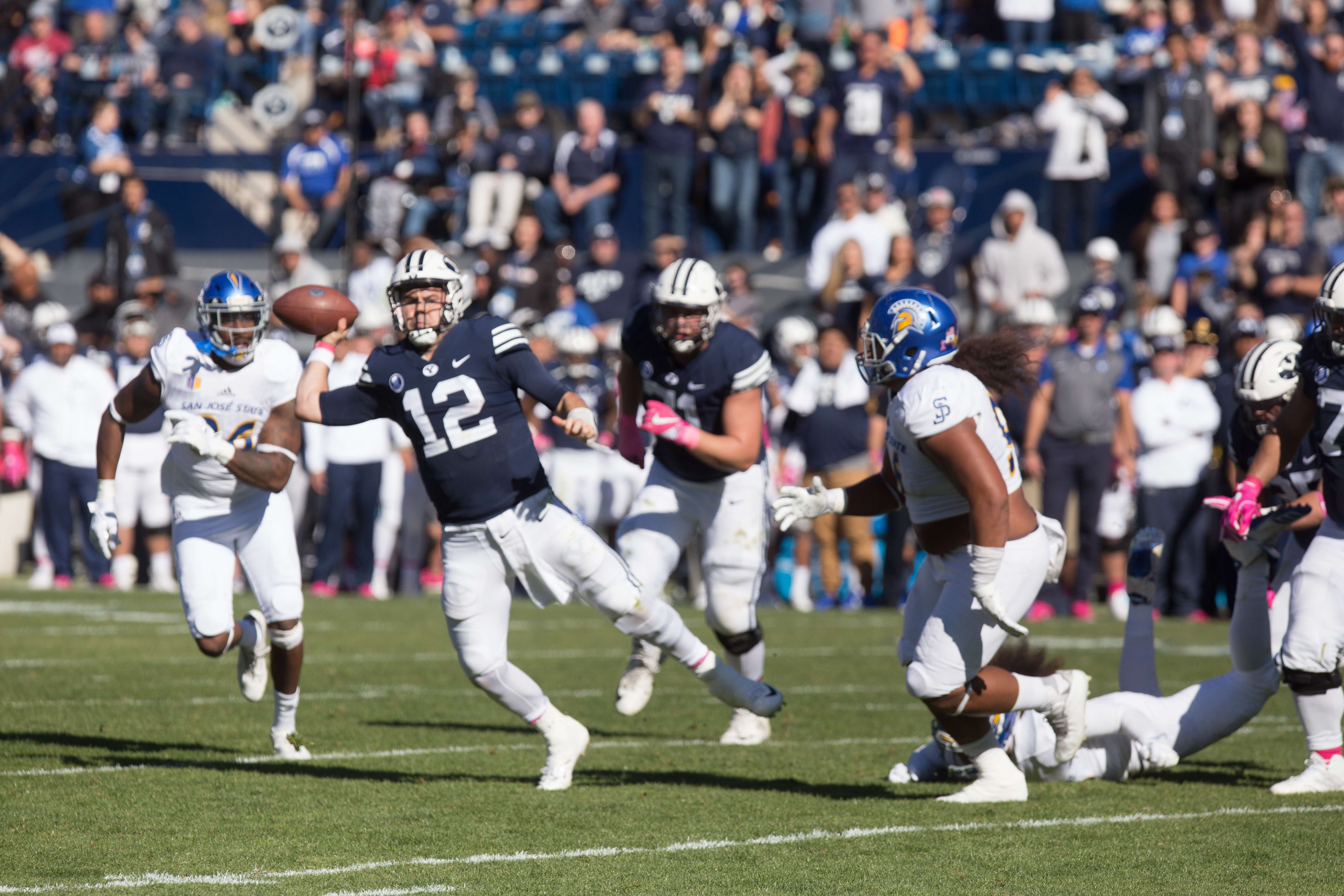 BYU football fell to Fresno State 20-13 on Nov. 4 for the team’s eighth loss of the year.

Not only did the Cougars lose the game, guaranteeing the first losing season in Provo since 2004, but they lost quarterback Tanner Mangum for the rest of the year.

“It sucks to have a guy work so hard to come back from the first injury and then have to go out again,” said wide receiver Micah Simon on Monday. “I’m praying for him (and) I feel for him.”

Mangum went down while trying to get a pass off to his right on a first-and-10 early in the fourth quarter. The junior immediately grabbed his right foot and after trying to move it, laid in pain with both hands on his facemask as the trainers took a look at his foot.

Mangum was later taken to the locker room with his right shoe off and the team announced he suffered a season-ending Achilles injury.

The incredible string of injuries continues… Tanner Mangum carted off the field after an injury to his lower right leg. #BYUFootball pic.twitter.com/iqRcQWFj2p

Heading into the game, 36 different BYU players including Mangum had already missed significant time due to injury. Of that group, 13 were projected starters at the beginning of the season and 24 were members of the two-deep roster at one point.

Mangum’s replacement in the Fresno State game, Beau Hoge, went 3-for-10 and threw for 51 yards.

This was Hoge’s first appearance since the Utah State game on Sept. 29; he left that game after suffering an injury in the second quarter.

Towards the end of the Fresno State game, tight end Matt Bushman also appeared to leave the field shaken up after a hit that forced a BYU fumble with 3:14 to play in the fourth quarter.

Mangum’s injury marks the sixth time in eight years and fourth year in a row that BYU’s season-opener starter has suffered a season-ending injury.

Max Hall was the last starter to make it through a season unscathed – he played in 39-straight games from 2006-09.

With Mangum done, look for Hoge and Joe Critchlow, whose redshirt year was cut short when he played against Boise State on Oct. 6, to carry the bulk of the passing attack the rest of the season.

Sitake said Monday that it’s an open competition between the two and Cody Wilstead will be in the mix as well.

Mangum had completed 20 of his 33 passes and thrown for 163 yards and was having one of his best games of the season before the injury.

After he left, the Cougars failed to put any points on the scoreboard and were held to under 21 points for the eighth time this year.

The Cougars will have a quick turnaround as they travel to face former Mountain West Conference foe UNLV on Friday.

BYU leads the all-time series 16-3 and the Cougars have never lost to the Rebels in Las Vegas.