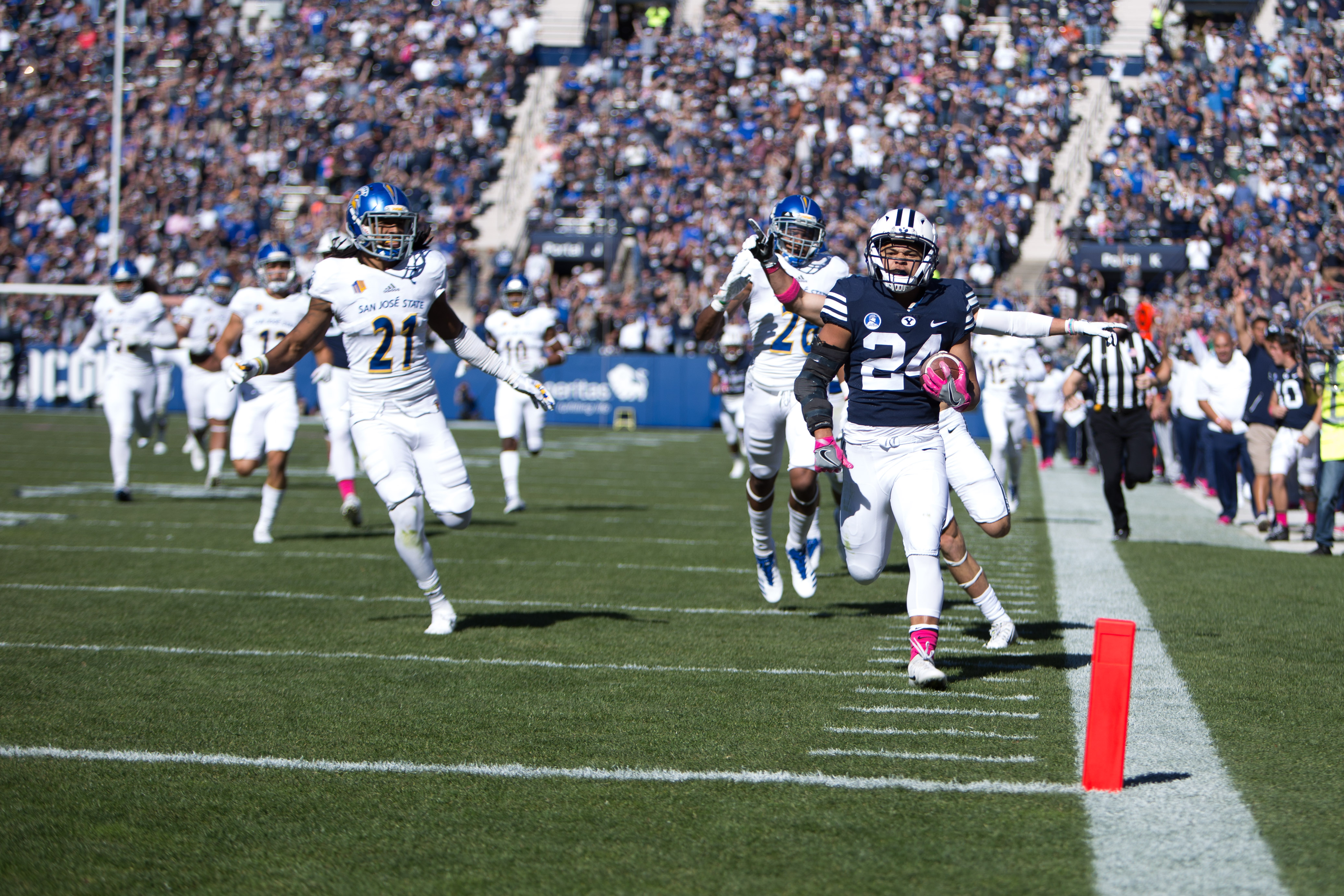 BYU football picked up its second win of the season, defeating San Jose State 41-20 on Oct. 28.

It was the best offensive output for the Cougars this season.

“It feels good,” said Sione Takitaki. “We finally got us a win, so it’s a sweeter feeling. I’m just excited. I’m happy.”

Takitaki said the difference came from executing early and attacking the opposing team instead of waiting.

“Our goal was to try to get some confidence and establish that identity and keep working on it and then try to sustain it throughout the game,” said BYU coach Kalani Sitake. “There are still a lot of things we can fix but I’m just pleased that we got the win. You know, it’s been something that we’ve been needing and I’m just excited for that, but I just really want to get back to work and try to get the next one.”

The LaVell Edwards Stadium crowd was not as full as usual with an attendance of 46,451–well short of the stadium’s maximum capacity of 63,725. However, that didn’t faze the Cougars, who gained 598 yards on offense.

Kalani Sitake’s word of the week was “aggressive” and that’s exactly what the Cougars were.

The first was a 23-yard pass to Micah Simon. The second touchdown pass was thrown to Matt Bushman just over a minute after the first.

“You know, right off the bat, we went to take some shots,” Mangum said. “That’s what we wanted to do. We practiced it all week– just playing with an aggressive mindset.

That aggressive mindset is something that paid off this week for the Cougars.

“I hope we can just keep it going–being consistently aggressive,” Sitake said.

The Spartans finished the first quarter with just three points off a 48-yard field goal, and BYU took a 14-3 lead into the second quarter.

San Jose State kicked another field goal, and BYU’s offense continued its success by scoring another touchdown in the second quarter.

Running back KJ Hall rushed for 75 yards and found the end zone, bringing the score to 21-6.

Later, BYU kicker Rhett Almond added a 36-yard field goal, bringing the score to 24-6; it was most points the Cougars have scored in any half this season.

In the third quarter, the Cougars continued to play aggressively as Mangum threw a 42-yard pass to Aleva Hifo, getting them to the San Jose State 9-yard line.

From there, Squally Canada scored on a 9-yard touchdown run, making it 31-6 BYU.

Within seconds of the start of the fourth quarter, Tanner Mangum threw a 41-yard pass to Simon for the latter’s second touchdown of the day.

Almond made his third field goal of the game, bringing the score to 41-6.

The Spartans scored their first touchdown of the game on a 30-yard pass from Montel Aaron to wide receiver Tre Walker before Aaron threw a 9-yard touchdown pass to Tre Hartley with 42 seconds to play for San Jose State’s final points.

The Cougars will next face Fresno State on Nov. 4 at the Bulldog Stadium in Fresno, California. Kickoff is set for 8:45 p.m. MDT and the game will be broadcast on ESPN2.