BYU student Annie Wallace said she went through the proper procedures to get her deposit back when she moved out of her apartment in April. She completed her cleaning check, returned her keys and left a self-addressed, stamped envelope.

But after two months, she still had not received her deposit.

The document notifies management they have five days to return the deposit and an additional $100 penalty to the tenant. Wallace dropped the notice off at the management company’s office.

Wallace sent the company another email about its failure to pay the penalty. If no response is given, Wallace is considering taking the management company to mediation to try to settle the issue.

“We’d go through BYU just because I feel like the threat of being in trouble with BYU housing is a little more powerful for them. I’m sure they paid a lot of money to get property within the boundary, so that’s their goal — to be BYU-approved housing,” Wallace said. “But hopefully we don’t have to take it that far. Hopefully after being notified that they broke the terms of the agreement, they will pay it.” 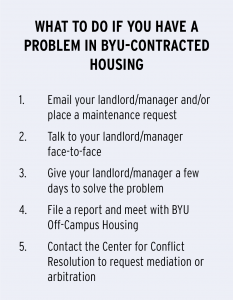 Briggs said if students experience a housing issue, they should first talk to their landlord or the landlord’s agent, and give the landlord a sufficient amount of time to correct the problem. If the landlord fails to do so, the student should file a report with Off-Campus Housing.

Briggs said sometimes students wait to talk to Off-Campus Housing until they move out.

“It just breaks your heart that they’ve lived with this for eight months instead of getting ahold of us and letting us help,” Briggs said.

After a student has filed a report, Off-Campus Housing will get in touch with the landlord so they can respond to the statement, Briggs said.

If the student is not satisfied with Off-Campus Housing’s solution, the office may then hand off the case to the Center for Conflict Resolution, where the student can file a request for mediation or arbitration.

Student tenants and landlords are contractually obligated to seek mediation or arbitration, per section 9 of the BYU Student-Landlord Rental Agreement. This means BYU student-tenants and landlords must genuinely try to reach a solution in BYU’s Center for Conflict Resolution before they can take action to court.

The Center for Conflict Resolution mediates between 150 and 200 student-landlord disputes each year, according to Director Benjamin Cook. Around 85 to 90 percent of those disputes end in a successful settlement, Cook said, while only about a dozen continue on to arbitration.

When a student or landlord files for mediation, one of the center’s two case workers contacts them. The case worker reaches out to both parties, and sometimes the case worker can settle the dispute at this time.

Often, though, the case worker schedules a time for the mediation. The student and landlord meet in the center’s conference room with a neutral third party.

If the two parties don’t reach an agreement in mediation, a student or landlord has the option to appeal to arbitration for a $30 fee. Arbitration is “kind of informal court,” Cook said.

In an arbitration, both parties have a chance to present their case to a three-person panel in the conference room. This panel usually consists of a student, landlord and faculty member or administrator.

If a party is unhappy with an arbitration decision, they can appeal to an outside court, but Cook has not seen that happen during his three years at the Center for Conflict Resolution. The court usually upholds the decision made in arbitration anyway, he said.

While both Off-Campus Housing and the Center for Conflict Resolution focus a great deal of energy on tenant-landlord disputes, that is not their only function.

Both offices provide students with a channel to communicate with and understand landlords, roommates and others. Briggs said a lack of communication and understanding are the root of many tenant-landlord disputes.

“People usually find out about the center because they have an issue with the landlord, but I’d like students to see it as a resource for any sort of conflict,” Cook said. “I know people think, ‘Oh, it’s not a legal dispute, so I don’t want to go to the center,’ but we have resources to help.”

Cook said students can meet with case workers to learn how to have difficult conversations, and they can consult with the workers on the phone to learn about conflict resolution.

Likewise, the Off-Campus Housing office can help students experiencing any type of housing problem because the office focuses on creating a positive experience for undergraduate students, Briggs said.

“They (students) are on the front line,” Briggs said. “We’ve got 23,000 beds out there, so we can’t be everywhere. We hope they do contact us after they’ve given the manager time to address (a problem) and don’t just live with it. Let us help you; that’s why we’re here.”

But Briggs said landlords are not the only ones with responsibilities in BYU-contracted housing; students need to keep their side of the agreement, too.

Kristy McClintick, Redstone Residential’s portfolio manager over College Place, said landlords are human and can make mistakes, but the majority of deposit refund issues have to do with the forwarding address.

“During the move-out process we communicate with the residents on what they will be responsible for completing on move-out day.  One of those items we overly stress is that they need to fill out a form that we provide to them with their forwarding address,” McClintick said in an email. “I would say that 50 percent of the time the residents do not follow through with this request.”

If students do not leave a forwarding address, the landlord legally must send the check to the tenant’s last known address, which would be the apartment, condo or house the student just left.

McClintick said Redstone Residential is always trying to improve the success of this process. Some of their solutions so far include printing out envelopes the residents can fill out; emailing, calling, texting and posting flyers during move-out week; and meeting with students before they leave to personally write down their forwarding addresses.

“Our number-one priority are our residents and making sure they receive top-notch service and leave feeling like they had the best college experience,” McClintick said. “And if someone is not receiving that service, we want to know so we can continue to improve.”

Wallace said before searching BYU’s Off-Campus Housing website, she was not aware she had the right to take action against the management company or of the law requiring a landlord to return a tenant’s deposit within 30 days. She said if more students are aware of their rights, fewer incidents will occur and students will have a better experience.

Students should read their housing contract and the BYU Student-Landlord Rental Agreement before signing either to learn more about their rights in BYU-contracted housing. The Off-Campus Housing website also has the answers to many common questions, and sometimes includes related legal documents.

Students who can’t find answers to their questions by going through these steps are encouraged to stop by the Off-Campus Housing Office in C-141 ASB or call 801-422-1513.