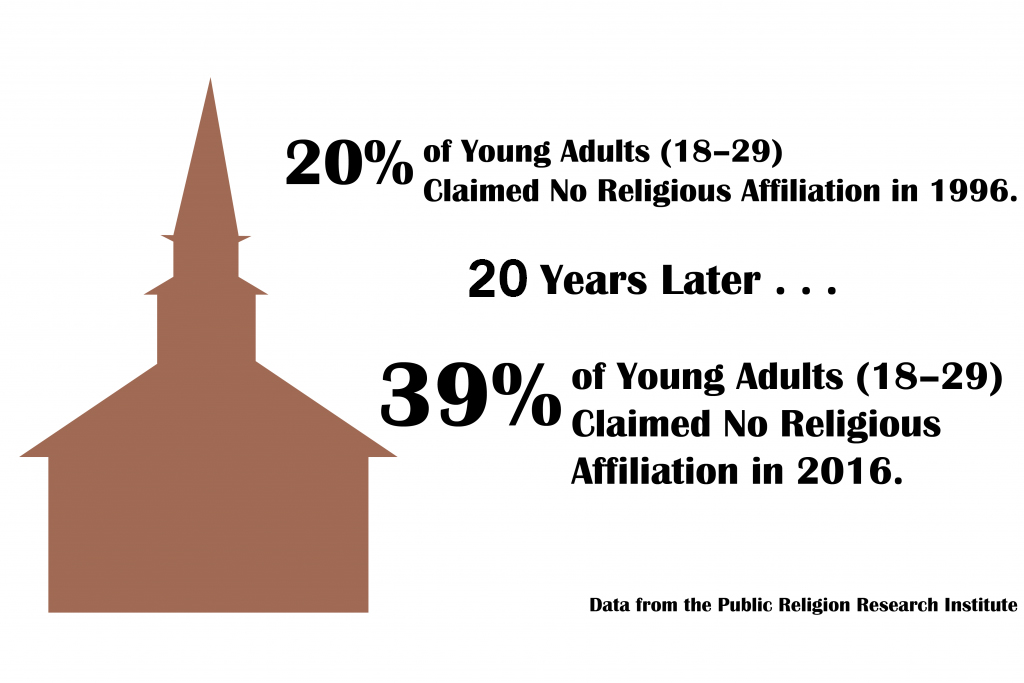 Religion scholar Jana Riess is on a mission to find out how millennials interact with The Church of Jesus Christ of Latter-day Saints.

She’s working on a survey project called “The Next Mormons,” which looks at how different generations of Mormons have interacted with the Church and why some leave. She wants to see if there’s been a generational change in religious views in regards to beliefs, theology, religious behavior and social attitudes.

Her team surveyed 1,155 current Mormons and 541 people who left the Church. They’ve weighted the survey to account for any unintentional oversampling, and now the data is “cleaned up” and representative of the LDS population in the U.S., she said.

Nationally, fewer young adults affiliate with a religious organization. A 2016 Public Religion Research Institute survey found 39 percent of Americans ages 18 to 29 were religiously unaffiliated, and the number seems to be growing.

Riess said as a religion scholar and a Mormon, she wanted to see how this trend affects the church.

Many millennials are strong believers, Riess said. They’re enthusiastic about relationship-building church programs, such as home teaching and visiting teaching.

BYU religion professor Mark Ogletree said he’s noticed millennials’ affinity for serving other people. He says this quality helps attract millennials to the LDS Church and keep them there.

“The millennial generation is a generation that loves to help and serve people, and there is no better organization in the world to belong to in order to help care and serve others than our church,” Ogletree said. “Helping people, serving others, building others — that’s what The Church of Jesus Christ of Latter-day Saints is all about.”

Riess’ survey splits 29 reasons for leaving the LDS Church into two categories: doctrinal and experiential. Experiential reasons include feeling judged or not having friends in the congregation.

“Overall, we were surprised to find that doctrinal issues were not as important for young people who had left the church as they were for older Mormons,” Riess said. “But for younger Mormons and for women of all ages, the experiential was more at the forefront.”

Several former members still have testimonies, according to Riess. Some still believe in broad Christian doctrines, such as God’s existence and Jesus Christ’s resurrection. But others still believe in specifically LDS teachings, Riess found.

“People who leave are often very complicated,” Riess said. “They have complicated relationships with the church, and in some cases, they’re believing without belonging.”

Ogletree said millennials leaving the LDS Church is part of the broader generational trend away from religion and toward a more secular culture — the trend that sparked Riess’ study.

“It’s part of the generation they live in where there is a significant amount of questioning and challenging the core values and beliefs our country was founded upon,” Ogletree said. “Questions are welcome. They always have been and always will be. We just need our people going to the right sources to get their answers.”

One of the top three reasons millennials leave the church is disagreement about LGBT issues, according to Riess’ survey,. Riess said this factor was not in even the top 10 reasons for the Silent Generation.

The other top two reasons were feeling judged and not trusting leaders “to tell the truth about controversial issues.” Riess said she believes the best way to prevent young adults from leaving for these reasons is to listen to them without judgment.

“There’s really no shortage of advice for young people, but I think there is a very severe shortage of listening,” Riess said.

Ogletree said he worries some millennials approach LDS doctrine as something changeable with the right “lobbying.”

“We don’t negotiate with prophets, and we don’t lobby the Brethren. The church is not a democracy. It’s a theocracy,” Ogletree said. “When our prophets and apostles speak, our responsibility as disciples of Jesus Christ is to align ourselves with their teachings and messages — not to fight against them. What they say is God’s will, and we’re not going to change church policies by getting thousands of ‘likes’ on Facebook for an opinion we posted.”

Millennial BYU student Hannah Parry said she appreciates what LDS Church leaders say about millennials is a positive contrast from the many negative societal beliefs about people in her age demographic.

“I love, love, love when church leaders talk about millennials because they talk about us in great ways: ‘You guys are awesome. You guys have had these experiences that have trained you to be the next leaders,'” Parry said. “That feels comforting that the leaders of the church have faith in us.”

Riess said she has also noticed how the leaders of the LDS Church talk positively about young adults. However, she is also concerned about the way they voice their praise, wondering whether it divides Mormon millennials from their non-Mormon peers.

“On the one hand, they’re full of praise,” Riess said. “But it’s always us vs. them praise.”

How to reduce stress with breathing exercises