The No. 21 BYU softball team defeated the Mississippi State Bulldogs 8-0 in the first round of the NCAA Regionals.

“We played well today,” said BYU coach Gordon Eakin. “We pitched well, we defended well, and we got timely hits. We just played a complete game today. We are capable of doing that and the key is to continue doing that.”

“We all communicated really well,” said Lexi Tarrow. “We were being good teammates to each other because we all want to be successful and do well as a team.”

In the bottom of the second inning, Alexa Strid hit a home run and Rylee Jensen had an RBI single.

In the bottom of the third, the Cougars exerted their dominance. Tarrow and Briielle Breland each had RBI single and Madison Merrell stole home. Caitlyn Larsen Alldredge also scored to put the Cougars up 5-0.

Lexi Tarrow tripled to right center in the bottom of the fourth, scoring Lauren Bell.

With the bases loaded in the bottom of the sixth, the Cougars brought home the win with an RBI single from Breland. Ashley Thompson scored, activating the run rule and ending the game. 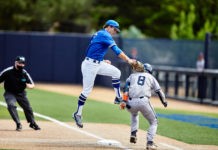 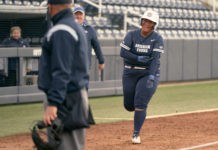 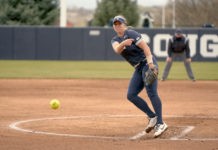