Art exhibits at the BYU Museum of Art and the Ashton Gardens at Thanksgiving Point provide a new way to engage with the message and life of Jesus Christ.

The garden gives visitors a way to conceptualize the stories and ideas about Christ they learned while they were growing up, according to Henrichsen.

“I think the most impactful thing has been families with children walking through,” Henrichsen said. “Most people have been naturally reverent, and showing their children this is this story or that story, so in that way it’s very illustrative.”

Henrichsen said she believes artwork can enhance beliefs and strengthen faith in Christ. She said her experiences seeing art in church as she was growing up helped her build her own testimony.

“I’ve always known that my testimony grew with aesthetics, so that’s always been an important part of building my testimony,” Henrichsen said.

While she acknowledged that everyone might not have those same experiences, Henrichsen learned these types of endeavors are worth it if even a few of those who visit the garden leave with a deeper connection or understanding of Christ.

“It was as though the finger of God had touched my heart and told me it was now the time to develop a talent I didn’t know I had,” Johnson said.

Johnson created the Light the World Foundation, a nonprofit corporation with the aim of building faith in Jesus Christ through art, in 2003 as her sculptural interests deepened. The garden exhibit, which holds 15 scenes from Christ’s life and 35 statues in all, will be a fixture at Thanksgiving Point for years to come.

“This is a gift, and Thanksgiving Point has taken it on,” Henrichsen said.

BYU Museum of Art religious art curator Ashlee Whitaker also demonstrates her passion for sharing the message and spirit of the Savior through art.

Whitaker said she was inspired by seeing the impact Christ’s life had on the history of the world. Her experiences led her to create a gallery to showcase the devotion of artists throughout history.

“All of these ideas came together in this exhibition showing how, over six centuries, artists have sought to magnify the Lord to make him great, to help us understand him, to see him in new ways, and in doing that have also used their talents and capacities to create timeless works of art,” Whitaker said.

Visitors to the MOA’s “To Magnify Christ” exhibit, located on the lower level of the BYU Museum of Art, descend into a gallery space of vibrant blue. Whitaker said the exhibit designer was inspired by the domes of European churches and cathedrals.

The exhibit, which opened in fall 2016, demonstrates six centuries worth of artwork from BYU’s collection centered on the life and character of the Savior Jesus Christ. The exhibit will be the first long-term exhibition of the museum’s religious collection.

The exhibit features more than 75 original paintings, divided into three sections, “Word and Witness,” “Patterns of Piety” and “To Fulfill all Righteousness.” Each section explores a different approach devoted artists and worshipers have employed throughout the centuries to draw closer to Christ through artwork.

Whitaker said she hopes it will be a place visitors can come to think, ponder and reflect on the Son of God.

“The religious collection will always be a priority at the Museum of Art,” Whitaker said. “We’ve acquired so many marvelous artworks, and I believe and hope that will continue so we’ll always have something on display.” 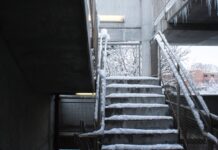