The following is a letter to the editor of the Gonzaga University Bulletin, written by GU senior Joseph Harshbarger.

Throughout BYU’s history in the Mountain West Conference, the students, university and members of the LDS faith were mocked in opposing arenas. Students dressed as LDS missionaries then hurled profane remarks, copies of the Book of Mormon were destroyed and other jabs were taken throughout most of the 2000s. University of New Mexico officials addressed students in 2010, telling them to keep ‘The Pit’ civil and welcoming. San Diego State took similar action that year, addressing chants of “You’re still Mormon,” after the Cougars knocked off the Aztecs. When BYU transitioned to the West Coast Conference in 2011, many of those practices died out. While the relationship between BYU and Gonzaga has historically been pleasant, one Gonzaga senior took exception to the behavior of a portion of the student section when the Cougars traveled to Spokane on Feb. 25.

We lost in more ways than one Saturday night. Not only was BYU’s final score higher than the Zags’, but some students showed an ugly, hidden side of the Gonzaga student body that includes using religion as a means of criticism.

Saturday night, a simple basketball game turned into a sort of religious crusade: Catholics vs. Mormons. Students filled the Kennel dressed in stereotypical missionary clothes, others informing friends of their conscious effort to dress “un-Mormon” and some even using derogatory language to shake the opposing players. Before the game even began, discussions of archaic Mormon policies regarding polygamy and other stereotypes could be heard throughout campus, all in anticipation of the big game of GU vs. BYU. We students used derogatory comments based on the opposing players’ religion in attempts to distract them from performing well.

Did this really help the Zags win?

Now, some may say that those of the Mormon faith have “strange” and/or “different” ideas. Let us note the various aspects of Catholicism that may appear “strange” to the outsider: the crucifix, the stigmata, the Papacy, Holy Communion, the gymnastics exhibition that is a Catholic mass and the Church’s obsession with holy relics, just to name a few. Do BYU students come to games and waive crucifixes at us? Do BYU students come dressed as 15th century priests ready to execute witch trials on those who are deemed “crazy” for their ideas?

The GU mission statement emphasizes our need to “foster a mature commitment to dignity of the human person, social justice, diversity (and) intercultural competence.” Students’ childish gibes at BYU players continually undermine the heart of what GU should and could be. Would it not be more beneficial to use that same energy on positive support for our Zags?

The founder of the Society of Jesus, Saint Ignatius of Loyola, encouraged everyone to go and “set the world on fire.” We as students have a responsibility to act as role models to show just how great we are at winning basketball games and encouraging inclusion, both in and outside of the Kennel.

Our country is facing a period of religious intolerance. We as young people have the duty to show the world that difference must and should be celebrated. Sports offer a wonderful opportunity for players to shed their national and religious identities, and to join together and play. Why do we as GU students feel entitled to mock and criticize the religion of other players?

Famed football player and coach Vince Lombardi is noted for saying: “Winning is habit. Unfortunately, so is losing.” It is never easy to lose a game (especially after winning 29), but losing is a part of life. Do not let GU lose again; stand up against the religious cultural appropriation and create a positive, inclusive campus that finds joy in difference, not an outfit for the next basketball game.

Readers’ Forum: A comparison of BYU dining and dating 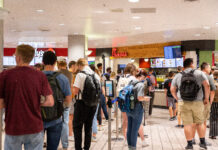