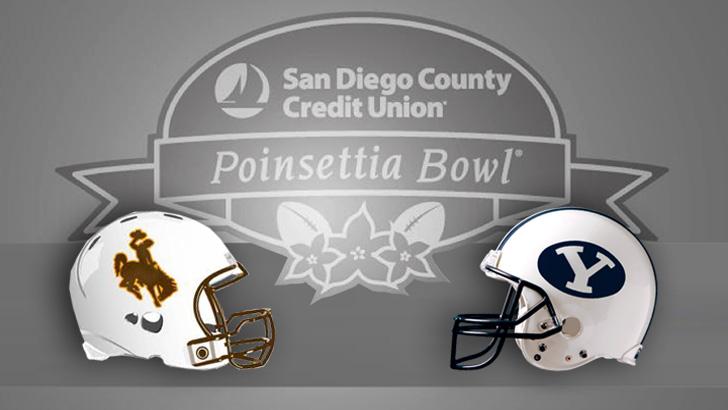 The BYU football team accepted its invitation to play in the San Diego County Credit Union Poinsettia Bowl after its bowl-qualifying win over Southern Utah on Nov. 12.

“Our guys are excited to play in the Poinsettia Bowl in San Diego,” BYU head coach Kalani Sitake said. “Wyoming is a well-coached team that just played for the Mountain West championship. Coach Bohl and the Cowboys have had an impressive season and Brian Hill is a great running back. We look forward to the game.”

Sitake led the Cougars to an 8-4 record through his first year at BYU, winning each of the last four games by an average 26 points. The Cougars’ four losses have come by a combined total of eight points.

BYU will play an 8-5 Wyoming team who lost in the Mountain West Conference Championship game to San Diego State. The Cowboys blew a 10-0 lead in the first quarter and ultimately fell 27-24 to the Aztecs.

“It is a great opportunity to play an old rival in BYU,” Wyoming Athletic Director Tom Burman said. “For our fans, I know this match-up will be one they will be very excited about. As with past bowl games we’ve been involved with, we look forward to seeing a great number of our fans in San Diego on Dec. 21.”

Wyoming features a strong running game which helped earn key wins over Boise State and San Diego State this season. Running back Brian Hill had a great season for the Cowboys, scoring 21 touchdowns and rushing for 1,767 yards.

Sophomore quarterback Josh Allen broke out, throwing 26 touchdowns and 2,996 yards in his first season as a starter.

“This is the culmination of a lot of hard work by our players and our coaches,” Wyoming head coach Craig Bohl said in a press release. “Having the Poinsettia Bowl select us to play in their game is a true honor and a great reward for our team. We are appreciative to the Poinsettia Bowl Committee for this opportunity to represent the state of Wyoming and the Mountain West Conference.”