Scrolling through Twitter after an ISIS-related terrorist attack yields tweet after tweet defending the religion of Islam — and a slew of negative, incriminatory and degrading Islamophobic tweets. Many of the positive statements are retweeted and praised, but so are the Islamophobic messages.

And the attacks are offline as well: hate crimes in the U.S. against Muslims in 2000 totaled 28 and skyrocketed to 481 by the end of 2001, clearly linked to 9/11. Hate crimes have decreased significantly since then, but are still not as low as pre-9/11 levels. 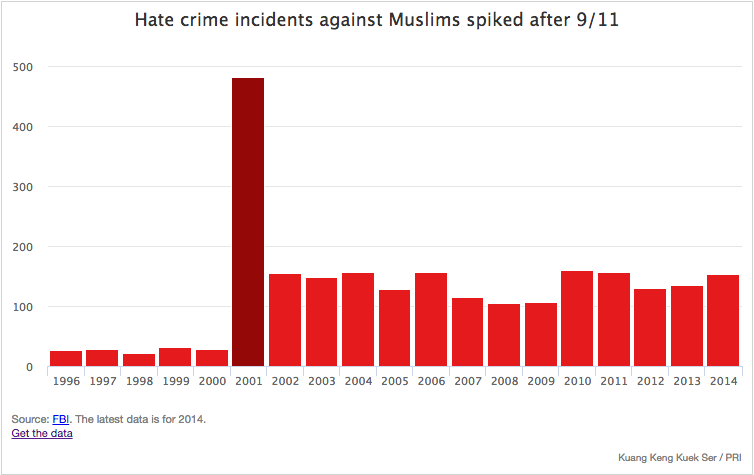 BYU professor Daniel Peterson is a professor of Islamic studies and Arabic who has studied Islam for about 40 years. He said he has seen a stark difference in the conversations during his Education Week lectures on Islam. Peterson said he has always had large audiences when he has spoken about Islam. Right after 9/11, Peterson said, his listeners were “very friendly” and “wanted to believe the best.”

“I’ve gotten much more resistance over the past several years,” Peterson said. “People have learned things on the web that may or may not be true but they don’t have the context to put them in so I get a lot more adversarial questions now whenever I speak publicly on Islam. I couldn’t quantify it but it’s been a distinct, tangible difference.”

Muslims in the U.S. are feeling the difference as well. Hussam Qutob is a 21-year-old Muslim from Palestine who is studying marketing at BYU.

Qutob has never been personally attacked on social media for his religion; he said he thinks this is partly because he only has his friends on social media and he doesn’t post his thoughts online.

BYU sophomore Dalia Abu Al Haj, from Ramallah, Palestine, is majoring in public health and is an Arabic TA. Abu Al Haj said she’s also irritated with the lack of understanding even though it’s 2016.

“We’re in the United States and it has one of the best technologies in the world and everyone has access to books, to websites, to all these resources that you can read about Islam and that you can actually know who are ISIS and why Muslims are against ISIS,” Abu Al Haj said, “but they do not do that and they just choose the easy way of believing what the media says.”

She leads a weekly culture hour to discuss a specific topic about the Middle East or Arabs. In her first culture hour, Abu Al Haj discussed Islamophobia and how it frustrates her to know there are people portraying a gruesome image of Islam. Many people assume Muslims are violent or aggressive and support ISIS, Abu Al Haj said.

And yet, social media accounts often depict Islam as a violent religion.

HRC says Americans suffer from Islamophobia. I'm sorry but it's not a phobia when in fact they really are killing Christians and Americans

“There’s a lot of nonsense that circulates online,” Peterson said. “Falsehoods, distortions, things out of context — and there’s no filter on social media. That is, anybody can say anything and claim anything and there’s no editor to say ‘Can you really justify this?’ or ‘Are you sure you’re right on this?’ and in fact the more sensational claims tend to crowd out the more measured claims.”

However, more measured claims are surfacing as well.

Islamophobia is when a bomb goes off in #ChelseaNYC & people hope the bomb makers are Muslims. Islamophobes want to equate violence w/Islam.

Violent Islamophobia is on the rise, is anyone paying attention?
A new video by the @hatehurts_ project. pic.twitter.com/OoZz0cK0hG

can yall stop blaming muslims for the bomb in #Chelsea without knowing the facts....your islamophobia & bigotry is showing

“With a lot of Muslim terrorist attacks and so on, it’s understandable that people get angry and feel scared. I just wish there weren’t people out there who are sort of blowing on the fire trying to get it to blaze more brightly. Accurate information is necessary,” Peterson said. “There are definitely problems. But we should be active about where they are and also where they’re not.”

Because of the accessibility of the internet, these posts can garner much more attention than in the past.

“There’s no one who steps between me and my mouse and a click. I can write anything and off it goes. … You take the person who has devoted his or her life to pharmaceutical research, maybe with an MB and a Ph.D, but online that’s just one voice and the other voice can be a crazy nutcase sitting in mom’s basement. It doesn’t matter, it’s just two voices on the internet.”

Abu Al Haj said her Arabic students have only ever had positive interactions with Muslims. One way she suggests overcoming Islamophobia is by sharing those positive experiences in person and on social media. Qutob tries to teach about Islam whenever he can.

“In Arabic, we say ‘I’m jealous on my religion,'” Qutob said. “I will defend my religion no matter what.”

Social media and news media can create negative images of who Muslims are, Qutob said. It could evolve into Muslims justifying their beliefs and not just explaining them, which Qutob thinks is heartbreaking.

“I would be more than happy to explain where I come from, explain my background, my values — which are positive,” Qutob said. “The religion is positive. And for people to just come in based on what other extremists did and judge me on what I believe in I think is just unfair.”

Sharing accurate, positive information, both online and off, is helpful, Qutob said.

“Our culture is rich, it’s beautiful. Our religion is beautiful as well — why not share it with people?” Qutob said. “To every Muslim: share your beliefs, share your thoughts. It gets boring because you constantly have to do it but at the end it’s the best thing to do. Because we should contribute, especially at this dark time. We should contribute more and push to a better society.”