Athletic administration and student athletes from past, present and future watched as former UCLA basketball player Ed O’Bannon fought his case all the way to the Supreme Court.

In October 2016, the Supreme Court decided not to hear his case. But O’Bannon, by challenging the NCAA’s use of players’ likeness and image for commercial purposes, has fed a movement that is sweeping the world of collegiate sports.

“O’Bannon is probably the most well-known of all the cases, but it’s just one of any number of lawsuits or legal cases out there,” said BYU assistant athletic director and director of compliance Chad Gwilliam. “Whether students agree or don’t agree with the basis of O’Bannon’s case and the others, I think they are seeing it and questioning.”

And it’s only the beginning.

Once again, the infamous question entered the conversation of college sports: with the NCAA bringing in nearly $1 billion a year on the Division I men’s basketball championship alone, should college players receive any sort of compensation for image use and merchandise?

In 2009, O’Bannon sued the NCAA and EA Sports after he saw a UCLA player modeled after him on a video game and questioned why the NCAA could prevent him from receiving a share of the revenue.

The U.S. Circuit Court of Appeals agreed with the federal district court in that the NCAA compensation rules were an “unlawful restraint of trade” and violated the Sherman Antitrust Act.

However, the appellate court also upheld the importance of preserving “amateurism” in college athletics and compensation related only to education.

“The effect of the O’Bannon case, in my mind, is part of this gradual movement,” Utah State’s director of compliance Jake Garlock said. “It feels like the tide is still coming in on whether a student-athlete is an employee, a representative of the university, a student, or an individual. All of the definitions are being challenged right now.”

Though the O’Bannon case has left the courts, there is no doubt it has left a mark on college athletics.

“It’s an interesting time because there are a lot of changes and proposed changes with the NCAA rules,” said BYU athletic compliance coordinator David Rasmussen. “There is a lot out there that athletic departments need to be aware of and that we’re juggling right now.”

Garlock agreed the NCAA has seen significant changes in the past few years and will continue to do so.

Rasmussen explained another NCAA change in the definition of an athletic scholarship, including covering the amount for cost of attendance at the start of the 2015-16 academic year.

Cost of attendance is an amount schools annually report to the federal government that defines what it costs to attend a particular school for a year. It includes figures such as tuition, room and board, books, fees, transportation and personal expenses (To see BYU’s cost of attendance, click here).

“Every school is going to have a little bit different of a figure for that stipend, if you want to call it that, but it’s not something you can really change on a year to year basis,” Rasmussen said. 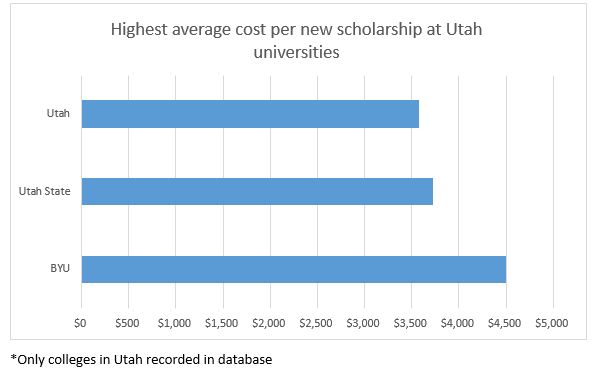 “As of right now, I see that NCAA schools are going to stay with cost of attendance,” Gwilliam said. “The thing that will continue to be debated within the schools is how every school is calculating that.”

Gwilliam cited the example of the difference in cost of attendance between USC and UCLA, two universities just 14 miles apart. According to the CBS Sports FBS College Football Cost of Attendance Database, UCLA reported its highest average cost per new scholarship was just over $4000 more than USC.

“Compared to when I came in here 14 or 15 years ago, it’s a completely different world,” Gwilliam said. “I think the next five or 10 years are going to continue to change and shift philosophy. Where it ends up, I don’t know. It will be interesting.”

The NCAA continues to fight legal battles, though athletes receive more benefits today than ever before.

“Everyone a little more cautious about how we look at student-athletes,” Rasmussen said. “Everyone is more aware of possible issues that might arise and some athletes are sticking up for themselves a little more.”

Garlock understands athletes are fighting for their individual rights, but such fights could create more problems than solve them, especially with so many athletes at smaller schools like Utah State that don’t have much market value.

“I think it would erode the NCAA amateurism athletic system and change it into a semi-pro, minor league system,” Garlock said. “If college sports turns into a business instead of a non-profit educational endeavor, then everything changes.”

Transforming athletics into a business would pull athletics away from universities and ultimately hurt both fans and athletes, Garlock argued.

“It will be interesting to see what happens down the road,” Garlock added. “It all depends on who the lawyers are, who the judges are and what the media does with it.”