WASHINGTON TERRACE, Utah (AP) — More than two dozen people in northern Utah are unable to return to their homes several days after a tornado tore through their neighborhood.

KUTV reports (http://bit.ly/2dds0x5 ) that a tornado ravaged the Washington Terrace community on Sept. 22, temporarily displacing several people and damaging one home beyond repair.

Gaelynn Sewell and her husband say the tornado ripped off half of their roof, meaning they will only be able to return to their house if it’s rebuilt. She says they are waiting for information from insurance adjusters, who have to call experts to assess the damage because tornados rarely hit Utah.

City Manager Tom Hanson says the city has streamlined the building permit process and waived fees so families can return home as soon as possible. 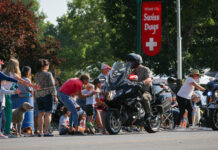