Camaraderie replaced rivalry on Sept. 10, as ROTC cadets from Brigham Young University ran the game day ball 26 miles to the Point of the Mountain before passing it on to cadets from the University of Utah.

The “football run” is a 40-year-old tradition that takes place before every BYU and University of Utah football game.

This year’s event began at 6 a.m. at LaVell Edwards Stadium in Provo when a team of three cadets ran the first leg. The ball made its way between five more teams, each covering a distance between three to seven miles.

Upon reaching the Point of the Mountain, the last team of BYU cadets passed the ball to cadets from the University of Utah. They made their way to Rice-Eccles Stadium for the Holy War. 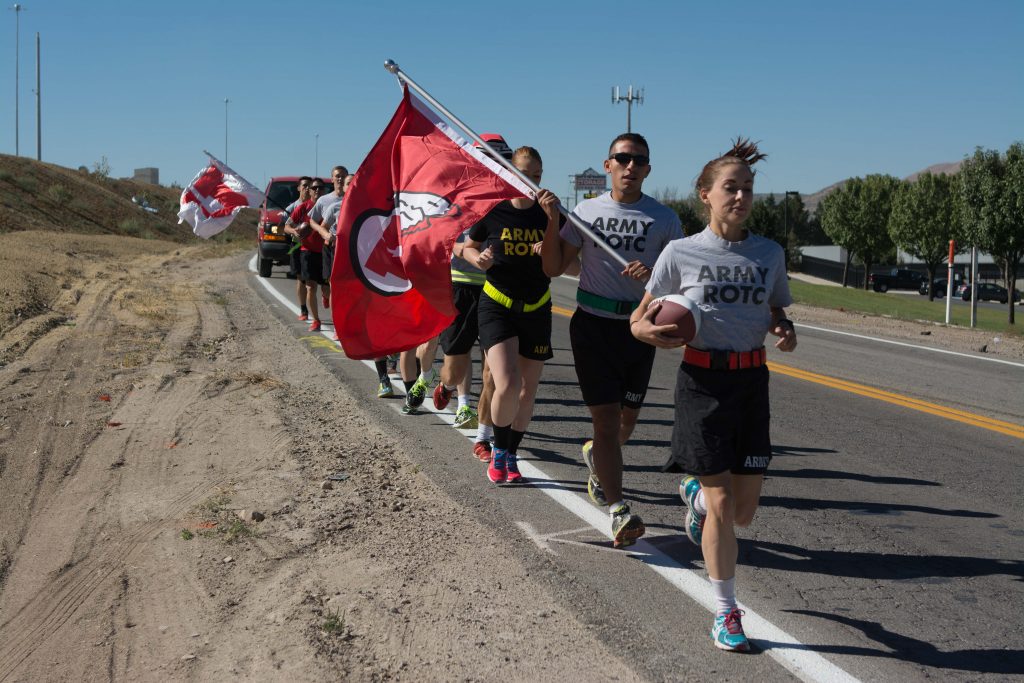 Kal Holyoak, a senior in the Army ROTC program, participated in the football run and said he appreciated the unity this event promoted.

“It’s a tradition where two separate universities, who are rivals in sports, come together to work as a team,” Holyoak said. “We are two Army ROTC units coming together to show what we can accomplish things together.”

Josh Young, a third-year cadet, had the honor of handing off the ball to a University of Utah cadet.

“Meeting up with the U to pass on the ball was a cool experience,” Young said. “There was that sense of camaraderie, as well as that competitive nature between the U and BYU.”

Young said he attributed his motivation to run the ball to his love of running and the great opportunity to display Army and BYU values.

“There’s a lot of spirit and high morals. It’s great to be able to display that to the community,” Young said. “I really hope that everyone is inspired and pumped up for the game.”

ROTC cadets volunteer to participate in the football run. The combination of daily training and esteem for physical fitness prepares them to take part in the run.

“It’s a great opportunity for us to show our physical fitness and promote team work,” Holyoak said.

Major Ben Ashton, cadre member and assistant professor of military science, coordinates and conducts training for BYU cadets as they prepare to become army officers. In 2001, Ashton participated in the football run as a cadet for the University of Utah ROTC.

“Despite previous angst that came from fans being over the top and aggressive, I hope that the football run can help build camaraderie between the two universities,” Ashton said. “I’m a big football fan, but more importantly, I like to see good sportsmanship.”

The Army has adopted the use of a French phrase, “esprit de corps,” meaning “a feeling of pride, fellowship, and common loyalty shared by the members of a particular group.”

“The reason why we do this event is because it builds esprit de corps,” Ashton said. “It’s a rivalry that has been cherished and long standing.”