My father and I stood at the front desk of a French hotel receiving multi-lingual directions to the Tour de France. It was mostly French translated to English with a dash of Spanish.

Because of the sponsorship, I was able to get a behind the scenes look of the Tour de France Thursday July 21 – Sunday July 24. 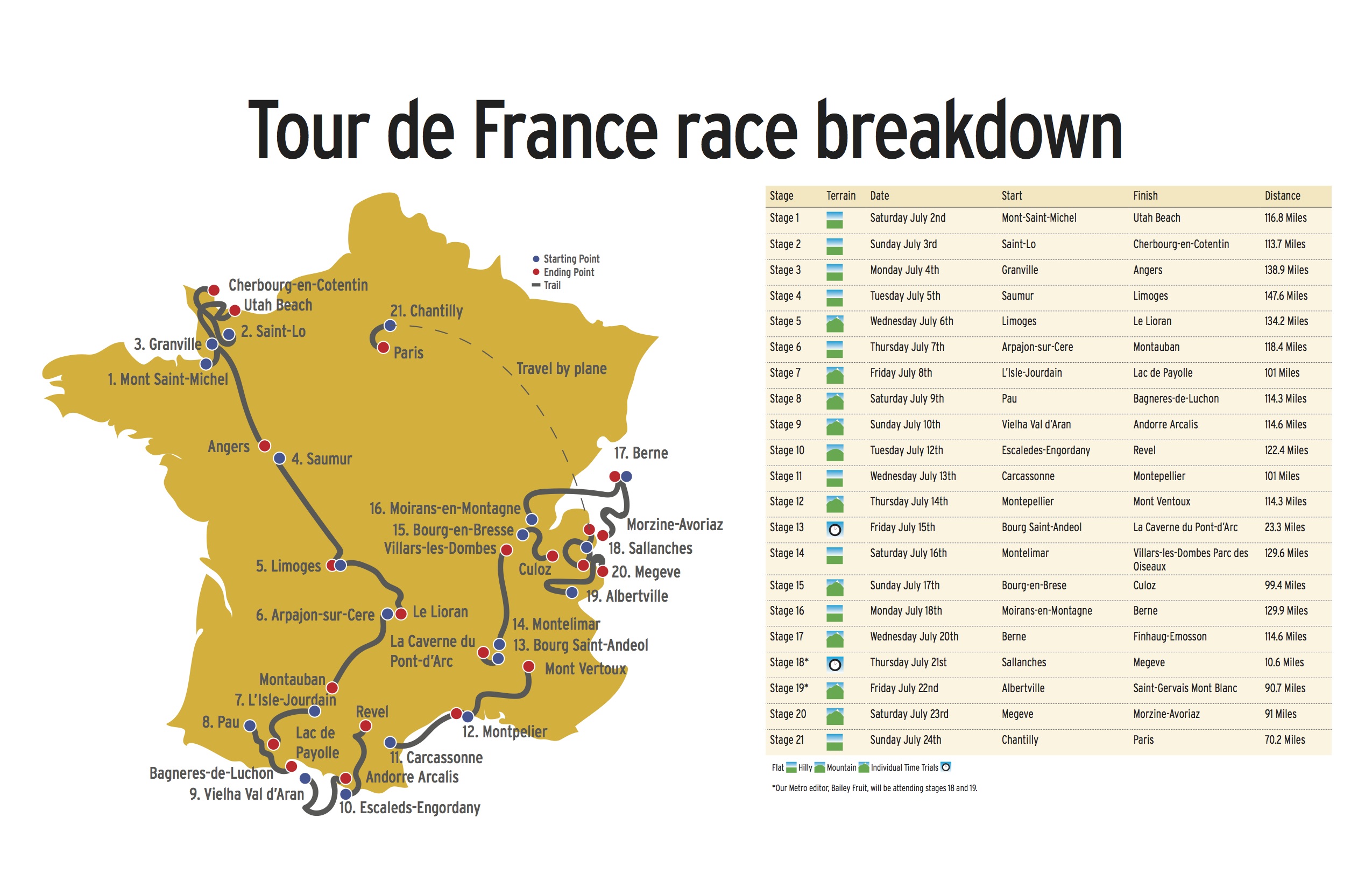 We were scheduled for a ride along on Thursday afternoon with team Lotto Soudal, following Australian cyclist Adam Hansen.

As we waited for our ride along we found ourselves at the team buses.

Riders who were about to begin their time trial were warming up on stationary bikes, preparing to take their turn to shoot out from the starting line three minutes after the previous competitor.

Fans lined the fences surrounding the area, waving flags and hoping to catch a glimpse of their favorite riders.

We made our way to a designated car and piled in; it was time for the ride along.

The crowd began counting down as a large screen flashed a 10-seconds-to-start warning.

The buzzer rang and Hansen was off.

The time trial was approximately nine miles uphill and one mile downhill. We followed Hansen, keeping 20 feet behind him as he peddled hard to ascend the hill. The crowds lining the course cheered loudly and tried to interact with the cyclist as he passed. At one point, Hansen passed his water bottle to a young boy on the side, all the while keeping up his speed.

The driver of our car used a hand-held radio to communicate with Hansen — who had his own handsfree device.

“Only two more kilometers of this hill,” the driver said.

Hansen smiled and laughed in return, obviously enjoying the conversation despite being in the middle of an intense physical workout.

Suddenly we were descending, flying down the mountainside. Hansen crouched low on his bike, to make himself as aerodynamic as possible. Each second counts in a time trial.

After the ride along we made our way back to the start line where we watched the last few handfuls of riders begin the race, finishing with stage-winner Chris Froome of Team Sky, who won with a 21-second lead.

The day featured nearly 91 miles of grueling mountain climbs. Pouring rain later in the day led to many crashes and exhausted cyclists. I was watching from the “feed car.” Being in the feed car meant we were in charge of assembling and distributing lunches to as many of the Dimension Data riders as we could.

Lunch consisted of water with sports powder, food wrapped in four small tinfoil squares, a Coke or Fanta, another square tinfoil labeled “cocoa” or “brownie” and ice wrapped in nylon.

After the team rode by and after we had distributed all the food we could the feed car team passed the remaining bags and 40 bottles of water to the support car that would be trailing behind for the remainder of the stage.

We next went off course, following a winding road to the finish line.

The finish line was an entire world of its own. Fans crammed against the fences blocking them from the strewn together mass of media personnel, police, motorcycles and vans. It was part order and part havoc.

I watched as France’s Romain Bardet came up the wet, windy hill followed by Spain’s Joaquim Rodriguez and Alejandro Valverde from Movistar in third. It was difficult to make out the riders through the masses of people, but eventually everyone had crossed the finish line.

Cyclists on the Dimension Data team were immediately given food and drink for recovery, along with towels, clean and dry shirts and a rain jacket.

Movistar’s winning man was Nairo Quintana, a soft-spoken Colombian with an incredible skill for mountain climbing.

According to Movistar Chief Marketing Officer Juan Pablo Molinero, police must escort Quintana when he trains in Colombia because so many fans want to interact with him.

The final stage is unique and full of tradition. Riders take a casual pace through the first portion of the race, up until they reach Paris. The cyclists aren’t trying to gain time or compete until the last 80 kilometers or so and the finish is an all out sprint towards the Arc de Triumph.

Movistar provided us with passes to sit on one of the grandstands arranged on the side of the road, 200 meters from the finish. The final stage is set up to be more spectator-friendly as the cyclists ride around the course eight different times. While I imagine it wasn’t an exciting course for the riders, I appreciated the chance to watch them pass so many times.

Each team celebrated after the finish. Dimension Data hosted a party on a boat floating down the Seine River. We joined them for a night of celebrating the team’s riders and their accomplishments as we passed by the sparkling Eiffel Tower. It was a great way to end a wild tour.