Editor’s note: Concern about the consequences of pornography in Utah has set the Beehive State apart from national trends, as lawmakers grapple with what they have recently labeled as a vice that threatens public health. The Daily Universe explores how the issue impacts Utahns, both politically and personally.

Third in a series.

Two Stanford graduates were riding their bikes near a fraternity house on Jan. 18, 2015, when they saw then-Stanford student Brock Turner on top of an unconscious woman near a dumpster. The two students chased Turner and pinned him down until police arrived.

Turner, an All-American swimmer on the Stanford swim team, was later charged with felony assault and attempted rape charges. He was found guilty of three felony sexual assault charges in March. When Turner was sentenced in early June, the fact that he will face only six months in jail and three years probation made national headlines. Victim advocacy groups and the family of the victim have called on the judge who sentenced Turner to resign.

What fueled the outrage even further? Turner’s father wrote in a letter to the judge that his son shouldn’t be punished for “20 minutes of action.”

What Dines said about pornography being a public health crisis reflects what the Utah Legislature did two months ago: Gov. Gary Herbert signed a resolution, which the Republican-dominated Legislature approved, that declared pornography as a public health crisis in Utah. Resolutions express legislative intent or position. Resolution SCR9, which was written by Sen. Todd Weiler, (R-Davis), states that pornography “is harming the people of our state and our nation.”

Utah currently stands alone among the other 49 states in declaring pornography a public health threat. But legislative officials are not the only ones fighting to educate the public on the harmful effects of pornography.

Dines believes that pornography is a public health crisis because it affects the way men look at themselves and encourages domination and violence in how they treat women.

Though women also use pornography, there are few well-known studies focusing on them. According to a recent study conducted by BYU faculty members Jason Carroll and Brian Willoughby, pornography use has increased dramatically in the past 10 years.  Among the 258 young adults surveyed, 70 percent of young men had viewed pornography on a weekly or monthly basis in the past year. Eighteen percent of young women had viewed it.

When examining how to deal with what is known about pornography’s impact on relationships, Dines said the only solution to help prevent sexual violence against women is to declare pornography a public health crisis.

“By declaring it a public crisis, it builds education programs that transforms the view of pornography,” Dines said.

Dines explained how behaviors change when health programs are created. When public safety campaigns were created to educate on the dangers of smoking, drinking and driving and shaking babies, they ultimately changed a social behavior.

“It used to be OK to shake a baby if he got frustrated, but when we had pediatricians, medical professionals, churches, parents and schools educating [on] the harms of shaking a baby, people stopped,” Dines said. “This is called a paradigm shift.”

Dines believes that educating about the harmful effects of pornography will cause a social shift in the current social acceptance — or ignorance — of the violence and domination pornography depicts. 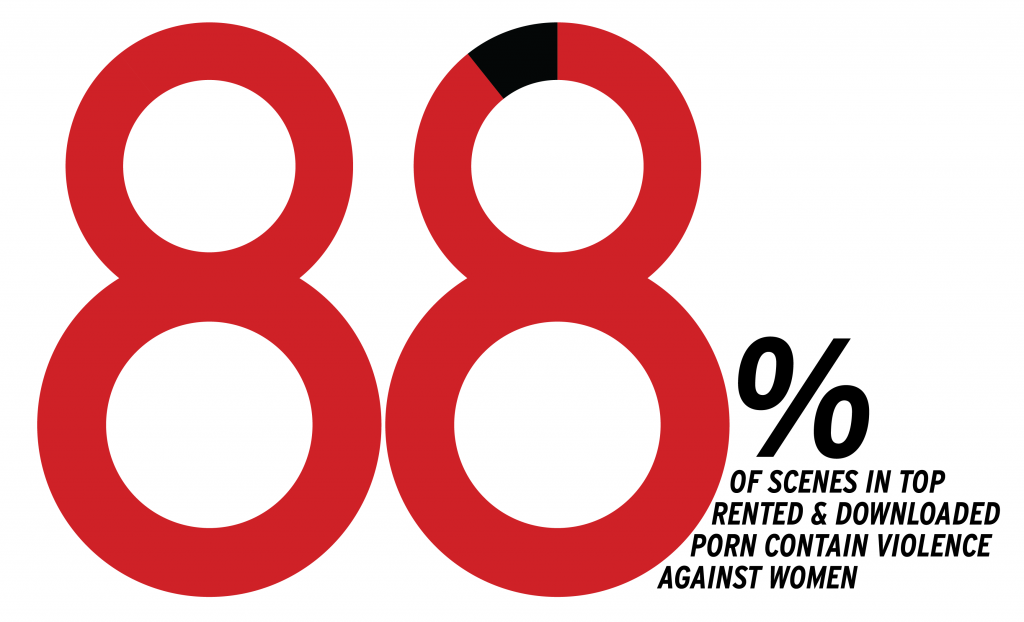 Rev. Sean Kilcawley of Lincoln, Nebraska, has seen a social shift within his local Catholic community ever since he began training priests on the topic of pornography.

“I have seen families transform,” Kilcawley said in regards to the success of his educational programs against pornography. “All of the priests [who have been trained] have left feeling confident on what to do when someone comes to see them.”

Kilcawley explained at first there was a fear among members to talk about their pornography addictions because of the nationwide scandal involving a large number of sexual assaults by Catholic priests over several decades. Many worried their reputations and employment could be compromised by asking for help.

“By getting them together with other people, it is very healing for them, so they don’t feel like they have to hide something from everybody,” Kilcawley said.

Kilcawley is not the only priest that is educating Catholics on pornography: the Roman Catholic Church as a whole is trying to combat pornography by educating its members. In November 2015, the United States Conference of Catholic Bishops (USCCB) released a pastoral response to pornography, which is meant to inspire others to address its dangers.

Pornography is still plaguing the nation, but many people such as Kilcawley and Dines are continually trying to educate others on its harmful effects and are effectively helping their community see a social shift on the way pornography is viewed.

Other efforts aimed specifically at young people, including the website and outreach effort created by former USU students called “Fight the New Drug,” are also having an impact.

USCCB Assistant Director of Marriage and Family Life for USCCB Bethany Meola believes that the future will improve as others continue to educate on pornography.

Stories in “The Pornography Plague” series: