This leaves Utah residents with the question of where to view fireworks on Monday, the actual July 4th holiday. According to Whitney Booth, a representative of the mayor’s office, the city has no plans to put on a fireworks display, and she has not heard of any other organizations which plan to do so.

So what are residents to do on the holiday?

Booth explained that neighborhoods often get together to put on fireworks displays. While local neighborhoods may put on a decent show, the only other options for viewing fireworks are visiting nearby cities which will be putting on official shows.

Thanksgiving Point and the city of Lehi will be hosting a fireworks display.  Admission to the event is free, and the event features vendors and concessions starting at 4 p.m. The fireworks will start at At 10 p.m. and last for about an hour.

While fireworks are a large part of Independence Day, there will also be other ways to celebrate throughout the day.

America’s Freedom Festival has organized numerous events for Provo residents. A Freedom Run will begin at Kiwanis Park at 7 a.m. Those who wish to participate can register beforehand and choose the option of a one mile run, a 5K, or a 10K. According to Hannah Sybrowsky of the American Freedom Festival organization, a total of 5,500 runners are expected to participate in the race this year.

The Grand Parade will begin soon after the race at 9 a.m. at 960 N. University Avenue and will make its way to its end on Center Street. The parade is expected to last two hours and will feature numerous floats, military vehicles, police escorts, and various bands.

Other events that span a majority of the day include a 3-on-3 soccer tournament hosted by BYU at the Indoor Practice Facility, a balloon festival at Bulldog Field and an art show at the Historic Utah County Court House featuring 22 local and nationally acclaimed artists. Sybrowsky went on to say that her favorite part of the holiday was walking to Freedom Days, a carnival on Center Street, after watching the parade.

“I have a fun time … just spending the morning in the Fourth of July spirit,” Sybrowsky said.

Meanwhile in Orem, people can experience the origins of America by attending Colonial Fest, a four-day, free admission Colonial experience beginning on July 1. This event is being held at SCERA Park on 600 S. State Street and will include Colonial period artists, reenactments, games for children, and a Mayflower replica.

Gregg Hardy of Colonial Fest said the replica is their proudest achievement because it gives people a chance to “meet history face-to-face.” 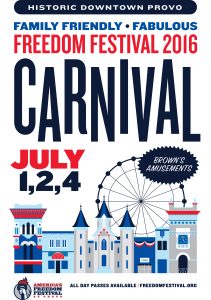