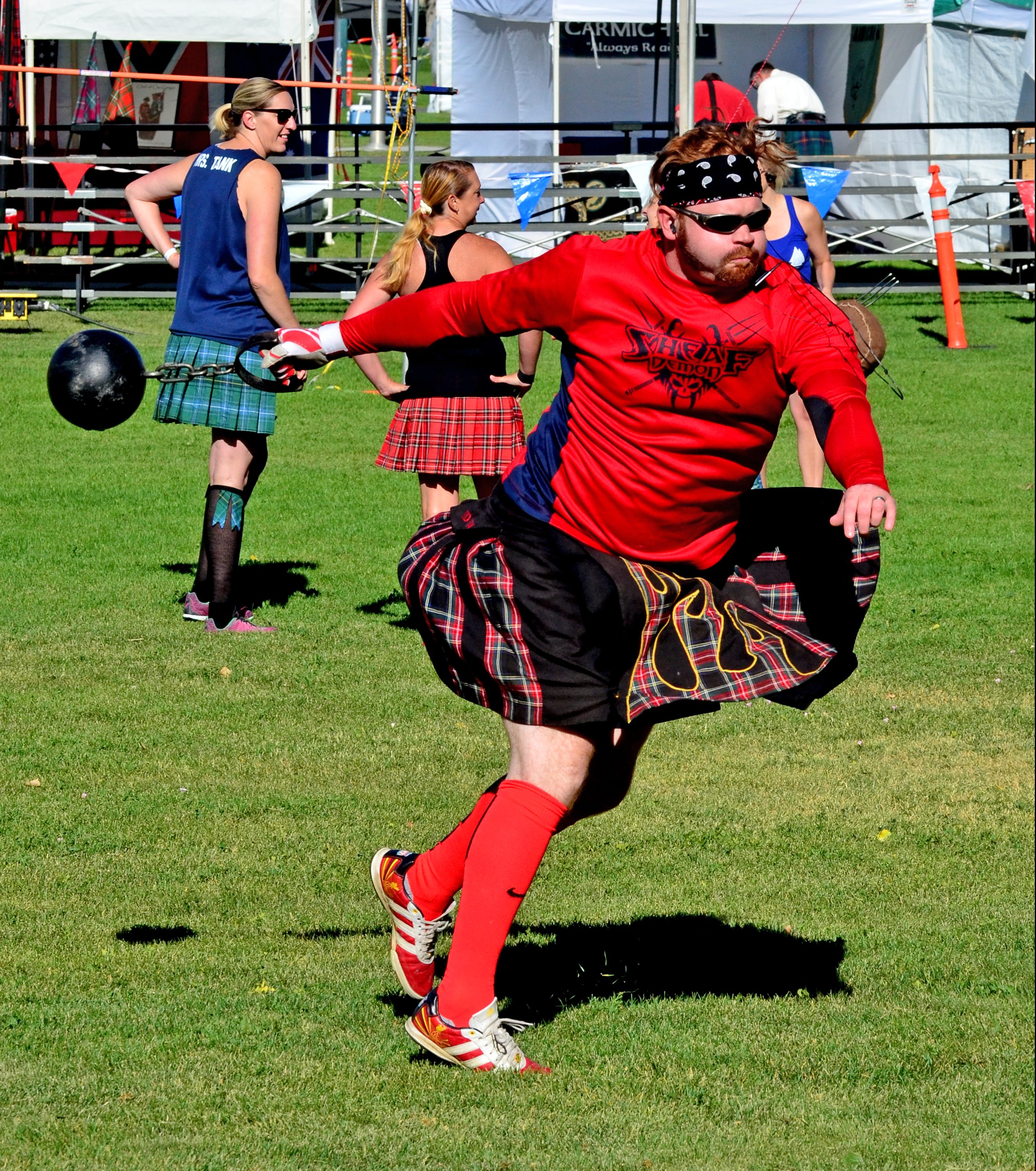 An athlete competes in the 2014 Utah Scottish Festival and Highland Games. Many will compete in the Highland Games this weekend at Thanksgiving Point. (Cody Hoagland)

Scottish pride is alive and well in Utah. The 42nd annual Utah Scottish Festival and Highland Games will take place at Thanksgiving Point on June 10 and 11.

This festival is hosted and organized by the Utah Scottish Association and is the biggest Scottish festival in the state.

“We have been growing this event for the last several years,” said Joel Sim, president of Utah Heavy Athletics and athletic director of the Utah Scottish Festival. “Last year I believe our gate count was north of 8,000 people.”

The Scottish Festival is an assortment of Scottish activities and music.

“This festival is the largest Scottish festival in the state of Utah,” Sim said. “We have pipers and dancers come in from all across the Wasatch Front and Rocky Mountain Region.”

The Highland Games are a combination of Scottish athletic events.

“The most widely accepted tale describes the Games as informal athletic tests by which Kings and Clan Chiefs examined the agility, cunning and physical strength of their clansmen,” according the Utah Scottish Association website. “The victors of these trials were then awarded positions of leadership both on the battlefield and within the clan.”

Professional athletes throughout the United States come to Thanksgiving Point to participate in the Highland Games.

“For the athletics, I have people coming from all over the country,” Sim said.

This year the Highland Games will host the lightweight national championship.

Everyone in the Highland Games participates in a series of events. Below is a list of the events and how they work.

The caber toss is a pole toss. Athletes toss poles anywhere from 14 to 20 feet long and weighing upwards of 100 pounds.

Two hammers, one weighing 16 pounds and the other weighing 22 pounds, need to be thrown. Without moving their feet, athletes whirl the hammer around their heads and throw the hammer over their shoulder for distance.

Weights are 28 pounds and 56 pounds. Weights are placed on the end of a chain with a ring handle. Athletes throw the implement using only one hand.

Athletes attempt to throw a weight weighing 56 pounds over a horizontal bar. Athletes can only use one hand.

Athletes use pitchforks to toss 20 pound burlap sacks stuffed with hay, straw or twine over a raised bar.

These events are difficult for the men and by the end the men are exhausted. But people of all skill levels can also participate in Highland Games for fun.

“We do have amateur competitions for all skill levels going on at the same time as the professionals,” Sim said.

Tod Johnson is a participant in the Highland Games who got into the event about a year ago.

“I went to the event (the Scottish Festival) a year ago and saw the games for the first time and thought it was pretty cool, and then I went to another festival about a month later and watched the games again and I thought, ‘You know, I’d love to do this, that looks like it’s kind of fun,'” Johnson said.

The Highland Games has strong Scottish culture and heritage in it. People in the event compete while wearing kilts.

“The connection is obviously with Scottish culture and history and when you are competing, you compete in a kilt,” Johnson said. “Which is typically mandatory. So I actually bought a kilt and it worked out great.”

“Throwing trees, rocks and stones — what better way is there to make a 51-year-old feel younger?” Johnson said.

While all of these athletic events are happening, fun and entertainment will be provided.

“The Utah Scottish Association — their mission is to grow Scottish heritage awareness,” Sim said. “They do everything from Burns dinners to tartan balls to tattoos, concerts and this festival.”

The main entertainment stage of the festival will feature some Celtic music bands. The Wicked Tinkers and Molly’s Revenge will perform. Both bands will feature bagpipes. Rebecca Lomnicky and David Brewer will also be featured as special guests.

A schedule of the events for both days can be found online.