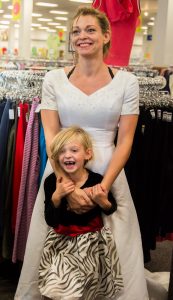 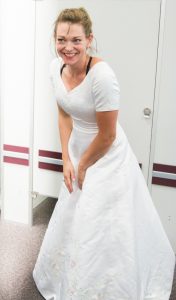 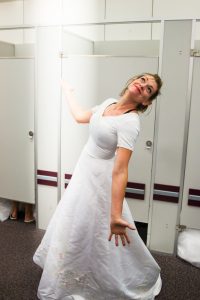 Christie Brady and her husband eloped 10 years ago. Now,  after five children, wedding dresses donated to Deseret Industries gives her the perfect opportunity to get a dress for a vow renewal.  (Maddi Driggs)

Hundreds of women gathered outside of the Provo Deseret Industries store (D.I.) before opening hours Thursday, waiting for their chance to find the perfect wedding dress.

The Provo D.I. recently received a donation of 1,000 wedding gowns, just in time for “wedding season.” The gowns came from an anonymous donor and locals have been eager to get their hands on them.

“It’s been absolutely incredible. There was a wave of people like I’ve never seen or experienced before in my life coming at me,” said Dustin Hofheims, a job coach at D.I.. “We had $250,000 worth of dresses donated, it’s over one thousand dresses, all from one donor. We also have a lot of prom dresses as well.”

Nicole Bagozzi, a UVU student from Sacramento, California, was one of the many eager customers to buy a dress.

“I saw the article on Facebook about the dresses that were donated so I thought I’d come see what they had and see if I could get a cheap dress,” Bagozzi said.

Other women shared the experience of D.I. dress hunting with their family members.

Caitlin Corbit, a BYU graduate and bride-to-be, and her future mother-in-law Tami Nelson were excited at the prospect of finding amazing dress.

Corbit’s mother called her earlier in the morning, urging her to hurry down to D.I..

Nelson said that the duo had gotten dressed really quickly this morning to show up to the store, explaining that they would only skip their morning showers and hair routines for true love.

The excitement of the event, along with the generosity of this type of donation, had emotions running high.

“Whoever has done the donation, it’s a real blessing for those who don’t have the funds to go out and spend $20,000 for a wedding and (who) want to feel just as special and just as pretty,” Nelson said with tears in her eyes. “Bless you whoever did this. I hope there is something wonderful here for all of these girls who are waiting in line.”

Trisha Evans, a D.I. employee from Provo, remarked that other wedding dress donations aren’t like this one. Coming in one-by-one, normal dress donations are usually mixed with other donations, thus finding a beautiful dress is a “diamond in the rough.” This donation was different because it all came in one giant donation.

“There are so many people, it almost feels like a reality TV show,” Evans said. “It almost seems like the parody that you see online of that girl chasing the guy in the wedding dress. We are the capitol of ‘get married’ so this is perfect for Utah County.”

Hofheim explained that the employees at D.I. were nervous when the donation first came in as they tried to determine how to arrange the gowns in the most efficient way for shoppers. He said that although the process or organizing the dresses was crazy and busy, the work was worth the cause.

“We use the money that is generated from these sales to pay for job training for our associates and for humanitarian aid. Every dollar that comes in goes to a good cause. It’s really exciting,” Hofheim said.

Kimberly Wright and her mother Diana Wright were hoping to find something special during their hunt for the perfect dress.

“We were hoping to find a dress because they said they had over one thousand dresses here. So we figured that there’s got to be a least one out of all of the dresses that were donated,” Diana said. “Weddings are one of those things that you end up being so, so picky about. To get a dress for one hundred bucks, it’s amazing.” 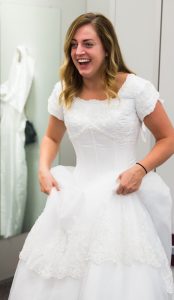 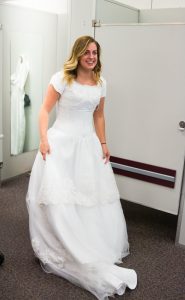 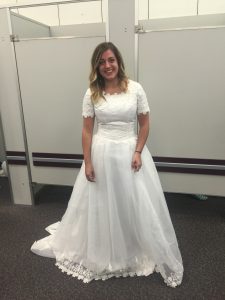 Shannon Moore thought she was looking at the D.I. dresses just to make her mom happy, but she found several she liked. (Maddi Driggs and Cassandra Shaffer)

Shannon Moore, a Senior at BYU who is getting married in Bountiful on August 25th, had some luck and found a dress she liked.

“I might say yes to this dress but it’s so hard to decide, there are so many dresses,” Moore said. “I didn’t think I would find anything today, I thought I was just coming to make my mom happy.”

Some women said “yes to the dress” while others left empty handed. All in all, everyone seemed to be having a good time.

Hofheim remarked that even if someone can’t find a dress today, they can always come back.

“You got to get here fast because there are a lot of people here, but don’t give up today if you can’t find the right one. Tomorrow we are bringing in a whole new shipment, tomorrow morning, it’s a new day with hundreds of new dresses.”