BYUtv’s newest series, “Random Acts,” is dedicated to offering random acts of kindness. The show began airing in April and will comprise 10 episodes. The producer of “Random Acts,” Tom Morrill, is excited to see others serve.

“We hope to inspire people to do random acts of kindness for others,” Morrill said.

BYU sophomore Russell Pham has watched a few episodes of “Random Acts” and loves that the cast members use their creativity to perform service-oriented pranks.

“Anyone can create what they do,” Pham said. “‘Random Acts’ inspires others to make someone’s day.”

Al Fox Carraway, also known as “the tattooed Mormon” is a big supporter of “Random Acts.” Since the series was released, Carraway sent out several tweets about her excitement for “Random Acts.” 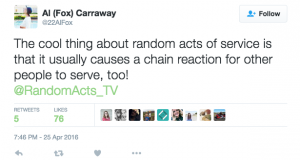 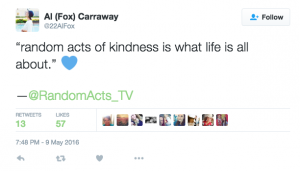 “Random Acts” takes an outside-the-box approach on looking outward and serving others. The cast members’ actions come as surprises to those they serve, adding to the recipients’ joy.

Episode Three is titled “Morning Glory” and is one example of the service that “Random Acts” performs. In the episode, BYU alumni and host of “Random Acts” Will Rubio, along with other cast members, searched the BYU campus for sleeping students. Once a sleeper was located, the cast of “Random Acts” made them a tasty breakfast before they awoke.

Rubio explained that “Random Acts” wants to encourage others.

“We want to provide a positive voice for people to consciously and subconsciously be better and do better,” Rubio said.

BYU sophomore Ruby Skagerberg regularly falls asleep on campus behind the Maser building. Skagerberg explained that sleeping students are scattered all throughout campus.

Random Acts served Skagerberg waffles, eggs and bacon. Afterwards, she paid the service forward to her roommates by placing candies and notes on their pillows.

“There are good people in the world,” Skagerberg said. “We should totally pay it forward.”

BYU senior Rachel Stone was also sleeping on campus when she was awoken with a delicious breakfast. She explained that she was having a really stressful day.

“I was surprised and really quite delighted,” Stone said. “It’s very BYU.”