Today’s digital world is creating competition influencing the 2016 presidential election. The candidates of this year’s presidential race are involved in a Twitter war, tweeting between five and 25 times each day. These tweets range between discussing the issues the U.S. faces, self-promoting the candidates and slinging insults toward the other candidates of the election.

Following these candidates on Twitter is a great way to get to know each candidate and his or her stance on important issues. Each candidate has an individual style used on Twitter, and this is what to expect when following them. 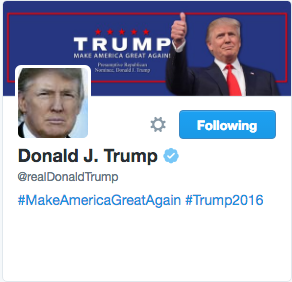 Trump’s tweets are highly focused on himself and his campaign. He wants the country to know why he believes he is the best option for president. He also wants the world to know about his accomplishments and how great he thinks he is. Trump has no fear on Twitter.

“I think Donald Trump on Twitter attacks anyone on there that is not on his campaign,” said Collin Smith, a communications major and former member of both the BYU College Republican and BYU College Democrat clubs at BYU. “There was an exchange between him and Elizabeth Warren, and they honestly sound like teenagers.”

Trump often uses name-calling on Twitter to get his point across. Lyin’ Ted Cruz, 1 for 42 John Kasich, Crooked Hillary Clinton and Crazy Bernie Sanders are the names he has designated for his main competition in the presidential race. His tweets can also be offensive and out of touch. Whatever Trump is tweeting about, he is sure to get a response from the public.

A political commentator for @cnn, which I no longer watch, said “Trump showed some weakness in the Repub Primaries.” I set all-time record! 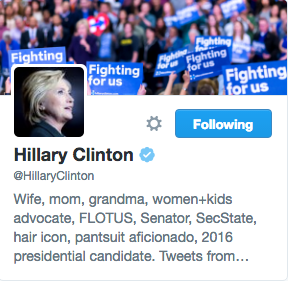 Clinton’s tweets tend to focus on Donald Trump and how he should not be president. Similar to Trump, she also includes her fair share of self-promotion. It seems she is playing the anyone-but-Trump angle, because she believes she will be his competition in the general election.

Clinton posts many links to anti-Trump articles on her own website. She has already began to focus on the general election.

“The main difference I noticed between Trump’s Twitter and Clinton’s Twitter is that she hits the point and moves on; she sounds like a career politician. Trump sounds like a business CEO who is in over his head,” Smith said.

Donald Trump is the presumptive @GOP nominee.
Chip in now if you agree we can’t let him become president: https://t.co/BSrJDaGSOe 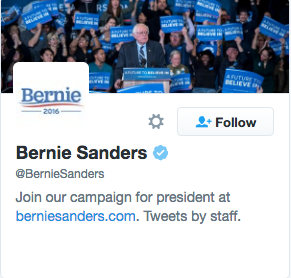 There are two different Twitter accounts for Sanders, both run primarily by members of his staff. Unlike his competitors, his tweets seem to focus on issues. He posts less content to promote himself directly and more content about current issues and where he stands on them. He posts a fair amount of tweets about his competitors, but not nearly as many as Trump and Clinton do. Sanders’ tweets rarely feature “I” or “me.” 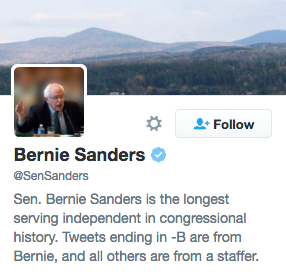 “As far as sharing their ideology, you have Bernie at the extreme. He seems to focus his tweets on sharing what he believes are problems America faces and, when possible in 140 characters, presented solutions,” said Evan Woods, president of the BYU College Democrats. Woods is a senior at BYU from Hampton, New Jersey, studying public health.

We must not accept young people leaving college and graduate school with a very heavy debt burden which many of them will carry for decades.

Twitter has opened up the microphone for politicians in the United States. Instead of delivering messages in speeches and on television, candidates are able to share their vision for the future of the nation in 140 characters. There is a significant amount of information online to learn more about politics and what the candidates are actually saying and doing. Twitter can be a tool to find what one believes and supports.