A recent music video released by openly gay singer Tyler Glenn of Neon Trees has stirred controversy among LDS Church members, including those in the LGBT community.

The popular rock band Neon Trees has had an LDS fan demographic since its early beginnings in Provo. According to Rolling Stone, Glenn announced his homosexuality in 2014 but spoke of his efforts to balance both his personal life and his membership in the LDS church.

However, that all changed six months ago when the Church handbook policy changes about baptizing children of same-sex couples.

In his new solo and accompanying video titled “Trash,” Glenn denounced his faith and attacked the LDS Church’s restrictive view of same-sex relationships by using graphic lyrics and imagery.

The song and video received a variety of reactions among members of Understanding Same Gender Attraction (USGA), an unofficial BYU club that provides a place for open, respectful discussion about LGBT issues.

USGA President Addison Jenkins said he saw responses of both shock and understanding from the LGBT community.

“I do remember seeing a pretty good mix. Some felt just as angry as (Glenn); others felt he went a little too far,” Jenkins said. “Within themselves, people have a mixture of feelings.”

Even Jenkins had mixed emotions about Glenn’s new song and video. 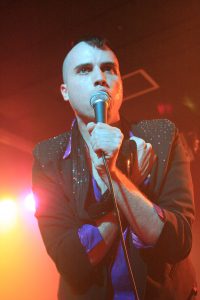 “Part of me thinks this isn’t helpful to the cause, because here’s yet another Mormon person who realizes he is gay, and 10 seconds later, in some peoples minds, he leaves the church and is literally spitting on Joseph Smith,” Jenkins said. “That doesn’t do a lot of good things for the image.”

Despite the angry method Glenn used to express himself, Jenkins is glad the video encouraged conversations about LGBT issues.

“That’s definitely not my style … but I’m glad that people are talking about it,” Jenkins said.

When discussing LGBT issues, Jenkins felt that the words of LDS Church leaders, who speak for the entire church, carry more weight than people like Glenn.

However, UVU student and musician Koltyr Wright, who is also a member of the LGBT community, expressed a different and more critical view after watching Glenn’s video.

Wright went on to say that although he has experienced personal struggles being gay and Mormon, he still has a strong respect for the LDS Church and its teachings. He disagrees with the way Glenn presented his bitter feelings.

“When someone introduces an issue by shouting it or screaming it, the response is to never calmly accept what is being said. You feel challenged, so you want to fight it, not accept it,” Wright said. “It creates more anger.”

According to Wright, the best way to get one’s voice heard is through personal interactions with people, rather than venting through anger.

“It’s saddening on a deeper level because you can see the massive misunderstanding that is being made in regards to the will of God and those who are homosexual,” Bodily said.

Bodily sees the LDS policy change as loving guidance. However, he feels sorry for those who feel the change is just a finger of judgement, pointing at them as dirty and impure.

“I have no way to speak for (Glenn) and what he’s gone through, but I can see that he has gone through a lot of pain and anxiety,” Bodily said. “It hurts to see someone turn away from God because their experience with him has brought them suffering.”

“I thought it was pure, angry emotion on a page. It wasn’t carefully thought out,” Johnson said.

Although Johnson wasn’t impressed by the musical aspect of the song, she wasn’t offended by Glenn’s expression.

“Everyone does have the right to express themselves — especially artists. They make a living off of sharing their ideas and exposing themselves personally,” Johnson said. “I’m not offended because I understand that he is human with emotions, and that was his reaction.”

The controversial music video has created a mixed dialogue with members of the LDS community.

Jenkins likewise said that no matter what the reactions have been, Glenn’s song has encouraged people to talk about LGBT Mormons and listen to their stories.

“There’s Tyler Glenn’s story, and Addison Jenkins’ story, and Zoe’s story … and there’s everyone else’s story,” Jenkins said. “If it helps LGBT students at BYU to be able to tell their story more, I think that’s great.”

BYU will require new employees to have a valid temple recommend